A SHORT STORY OF THE EXAKTA

photographs and text by Massimo Pacifico 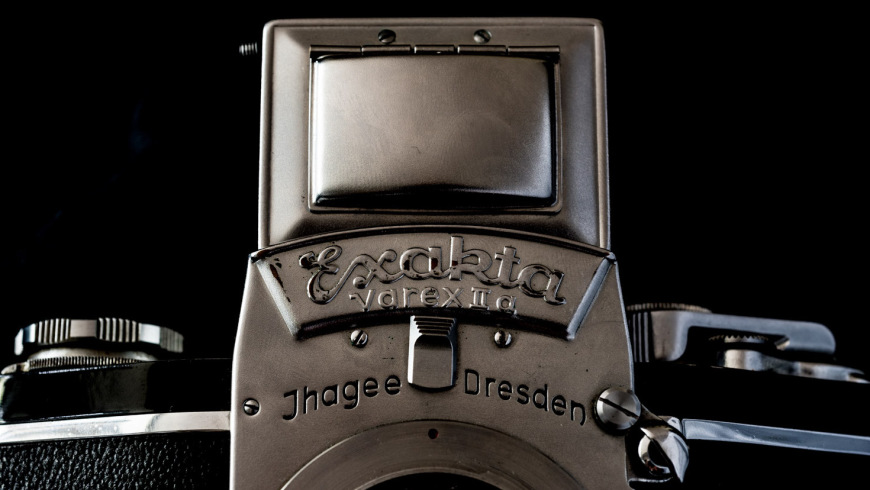 It was a Dutchman, Johan Steenbergen, the son of camera wholesalers in The Hague, born on 7th December 1876 in Meppel, a town in the north-east of the Netherlands, who gave life, in 1912, in Dresden, to the factory that would produce, twenty years later, the most revolutionary camera of the first half of the 1900s: the Exakta. Steenbergen had wanted his factory in the city that already housed famous brands, such as Ernemann, Ica, Zeiss, Welta, and in which it was not difficult to find and hire technicians of proven ability. He called his company Ihagee, an abbreviation of the officer Industrie und Handels Gesellschaft m.b.h. and established the headquarters in Marcolinistrasse, at number 8.

The Ihagee cameras immediately stood out for their innovative simplicity. A series of medium format reflexes (from 6.5×9 to 9×12) were successful, due to their compactness, such as the Klappenreflex, or, due to the brightness of the lens mounted (f1.5 or f2), the Nacht, or the Parvola which stood out for its unique focusing system with double helicoidal that made the bellows antiquated.

But it was in 1933, at the Leipzig Trade Fair, that Ihagee presented the model that would become the forerunner of all modern reflex cameras: the Exakta, a name that denounced the claim of not having committed design errors. It had a different trapezoid profile than traditional box-shaped SLR cameras. It was small, compact, ergonomic, made for interchangeable lenses of great brightness, and had a focal plane shutter. All features that we take for granted today, but that more than 80 years ago were surprising innovations. That first Exakta accepted 127-sized films.

Only in 1936, the year of the Olympic Games in Berlin for which a large sale of cameras was expected, a 35 mm version followed: the Kine Exakta. It soon became the highlight of a system that competed with small Leica and Contax rangefinder cameras that had monopolized the interest of photojournalists of the time. It also had the indisputable advantage of being able to use long-focus lenses without additional accessories.

After World War II Ekaxta was the leader in the development of cameras with a 35 mm SLR system, thanks to the concession granted to Ihagee by Eastern Germany government to operate as a “foreign”, non-state industry. Then came the Japanese who took advantage of the loss of identity of the German industry, increasingly divided and weakened by countless patent disputes.

The models and versions of Exakta with trapezoidal profile, produced until 1970, were many and with countless variants. The last was the VX 500. Then began the production of the RTL 1000, marked Pentacon, an “other” camera.

In 1952 the more sophisticated Exakta was paired, in the system, with a cheaper camera but with not too inferior performance: the Exa. It was smaller, it had a metal shutter with only 5 speeds (faster 1/150, instead of the 1/1000 of the leader), an even more appealing design than the “mother” and a body that weighed only 465 gr.

The Exa marked another success of the mature company (rebuilt after the British and American air raids of February 1945 that had destroyed it, like the rest of the city). It had the same pace as the Exakta and therefore could fit all the objectives that Zeiss had produced (and will produce) in Jena, Meyer in Görlitz, Schneider in Kreuznac, Angenieux in Paris and other prestigious companies in Europe.

The Exas shown below are: a Version 3 (serial number 262115, of 1956) with the Rheinmetall Sömmerda brand, a precision mechanics factory to which the parent company, overburdened with requests, entrusted a temporary production; and a Version 4 (serial number 456655, of the 1957). Of the last version of the Exa, the 1C, nearly 104 thousand were produced by Pentacon. Production ended in 1987. 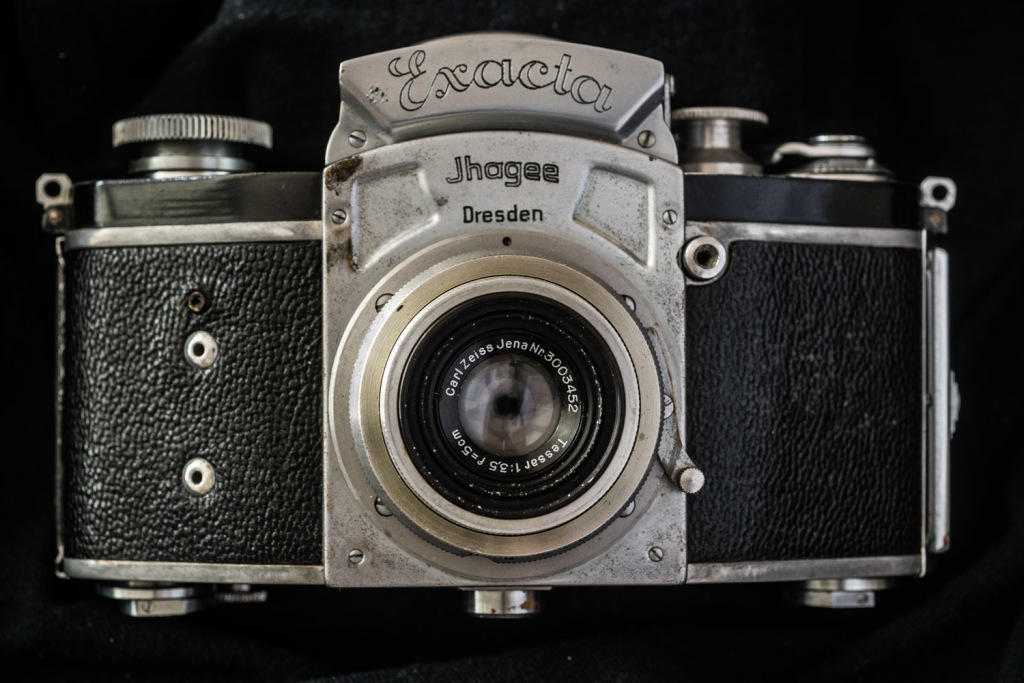 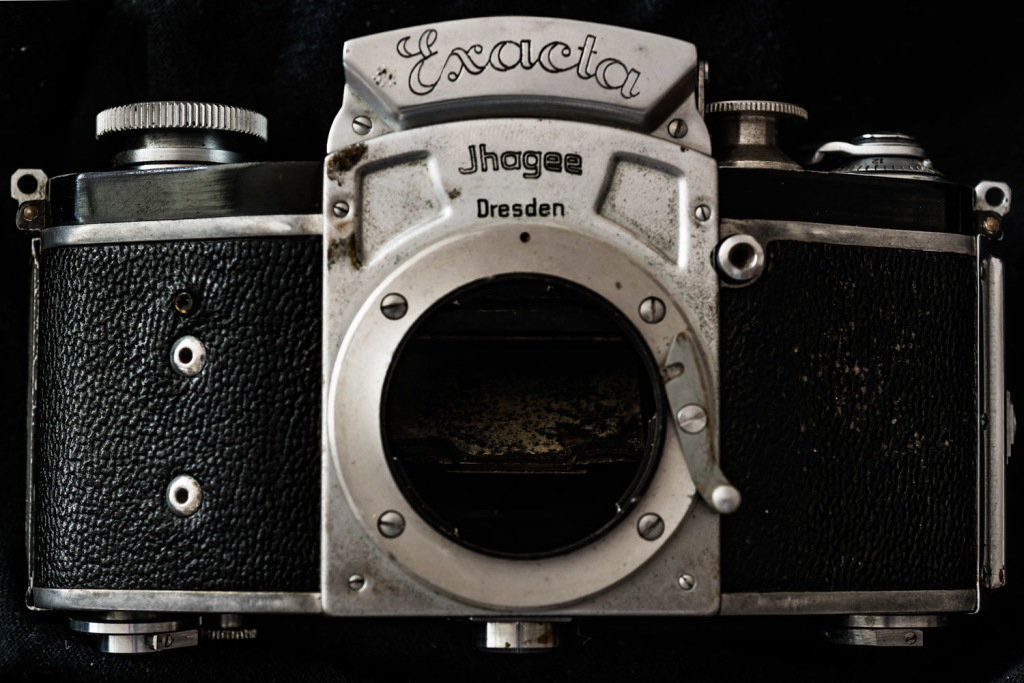 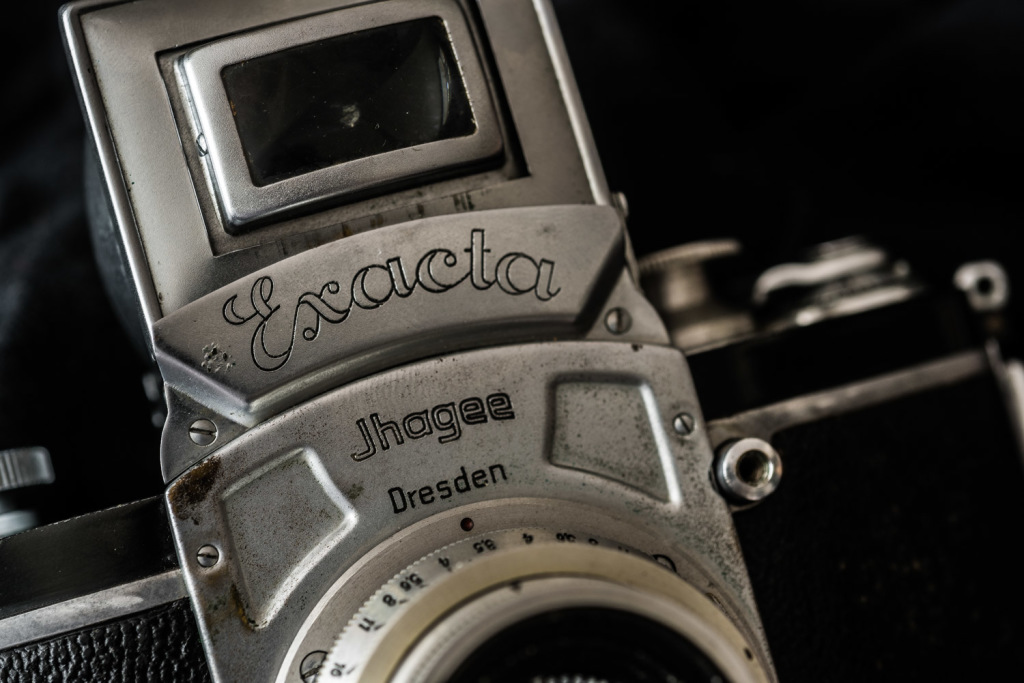 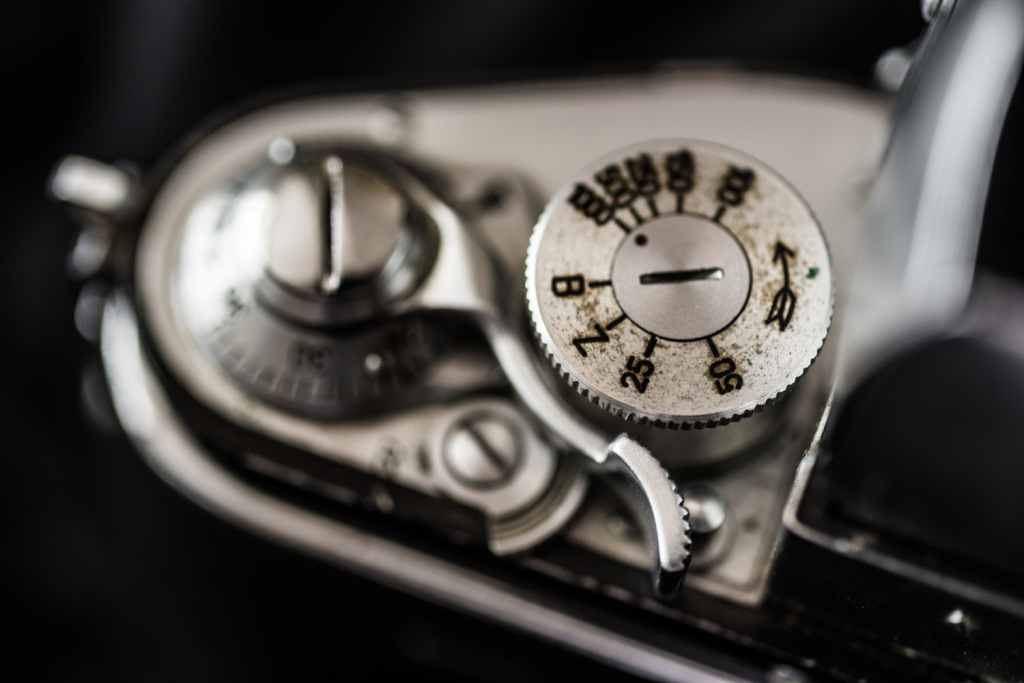 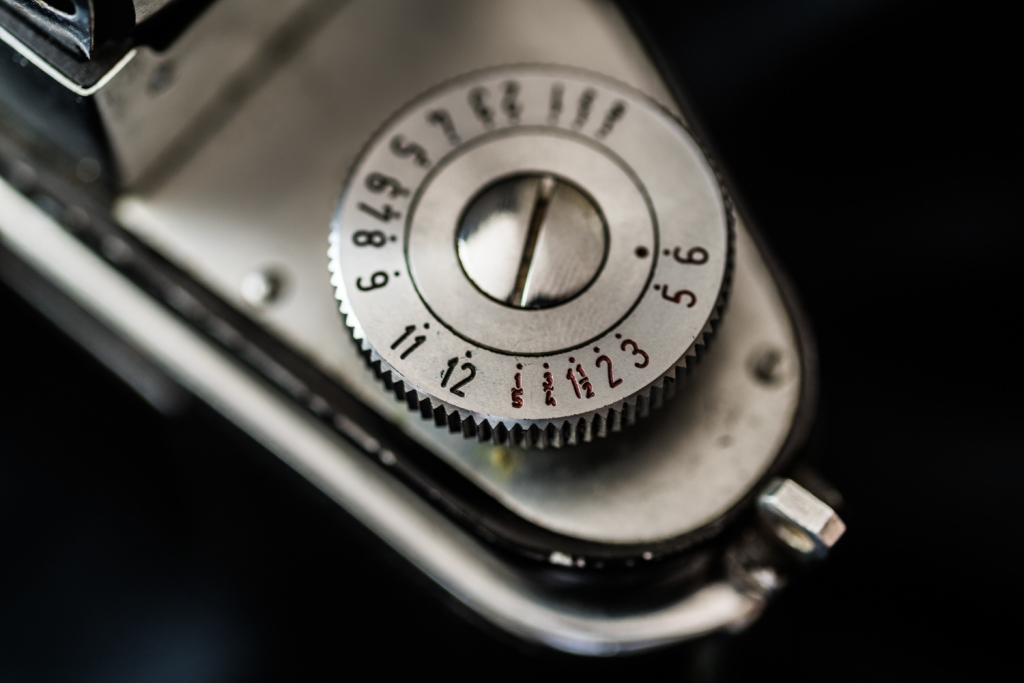 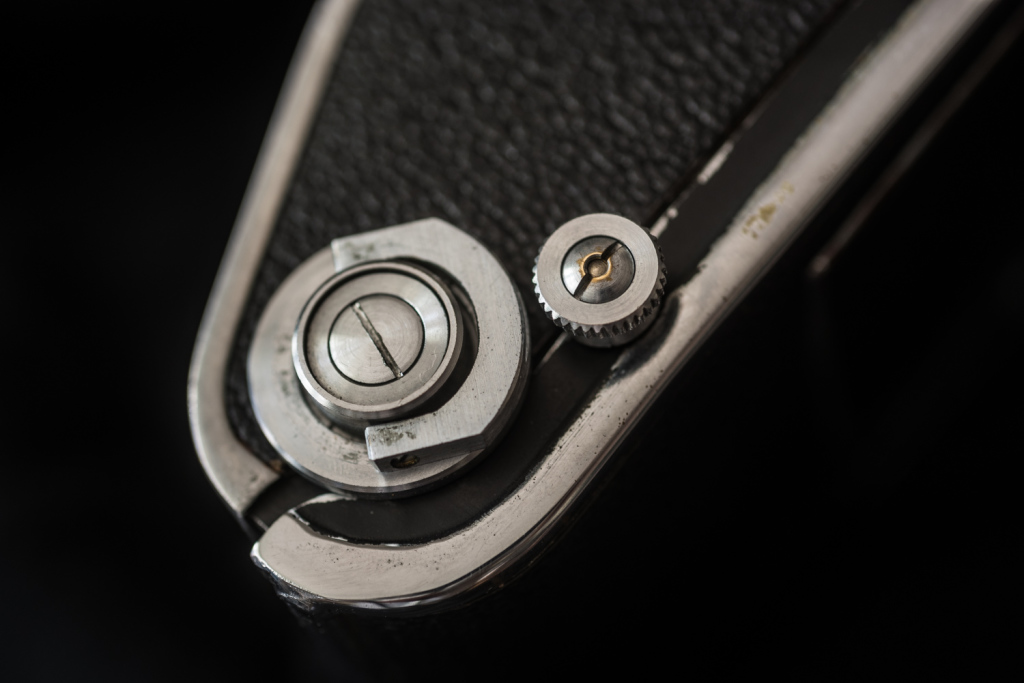 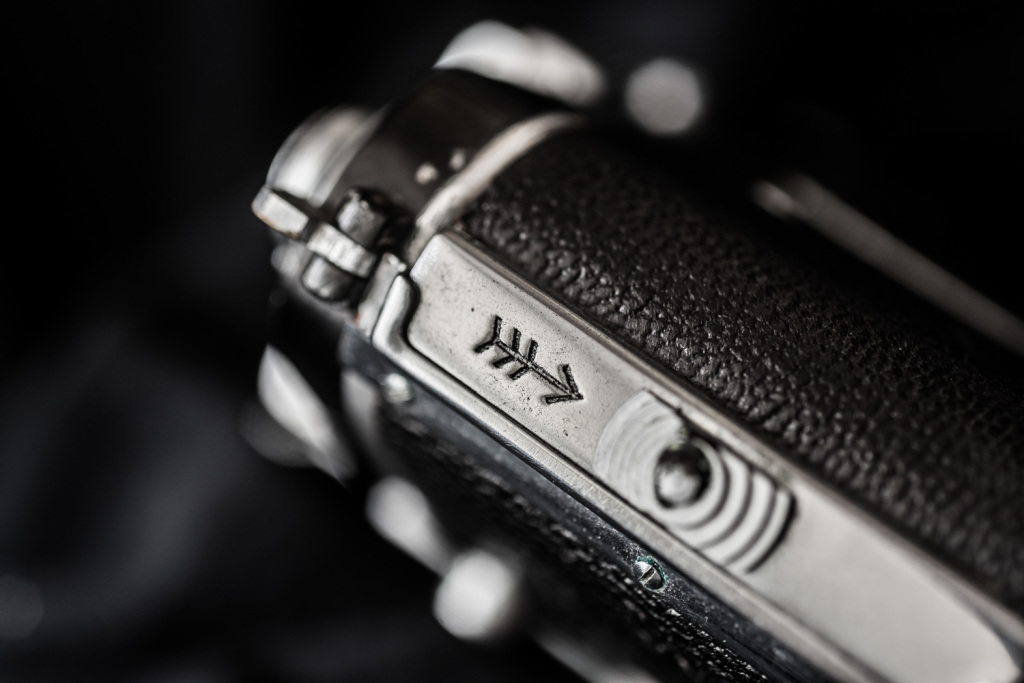 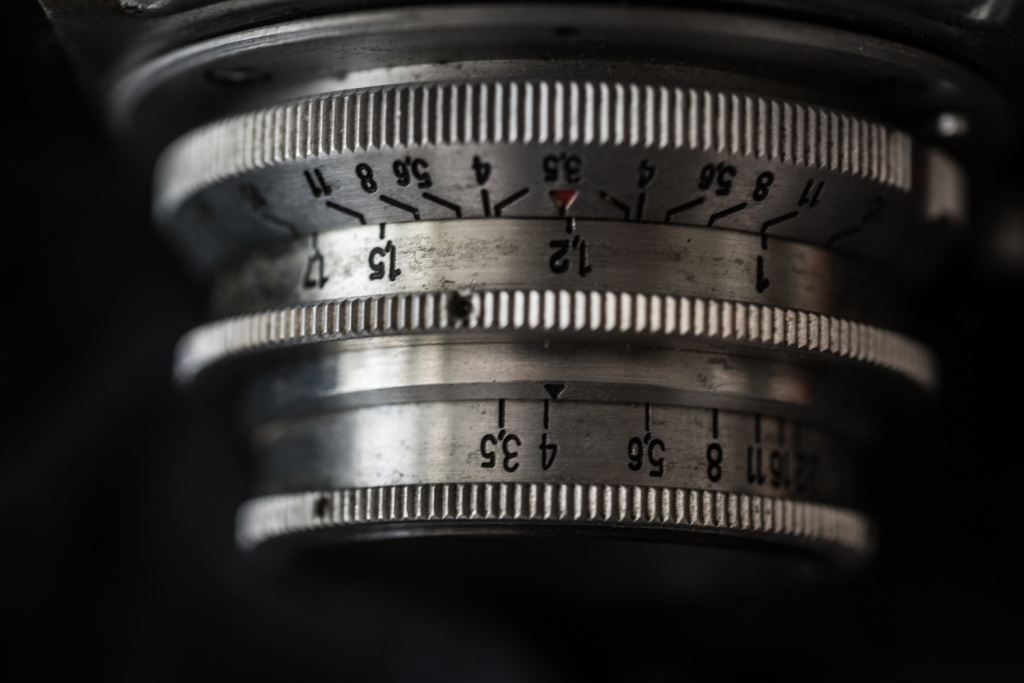 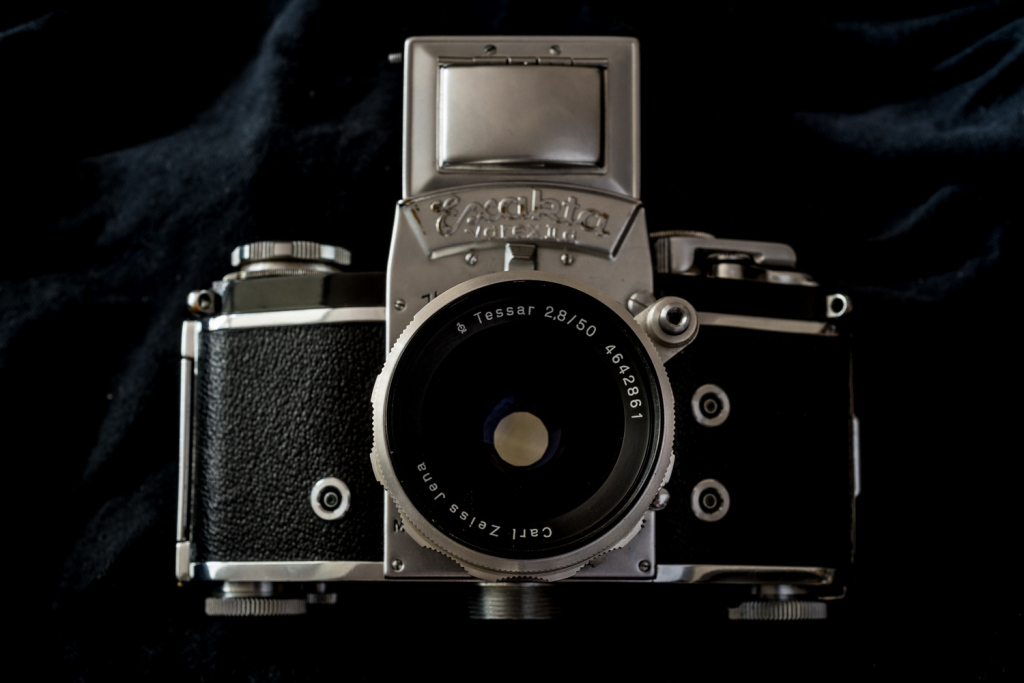 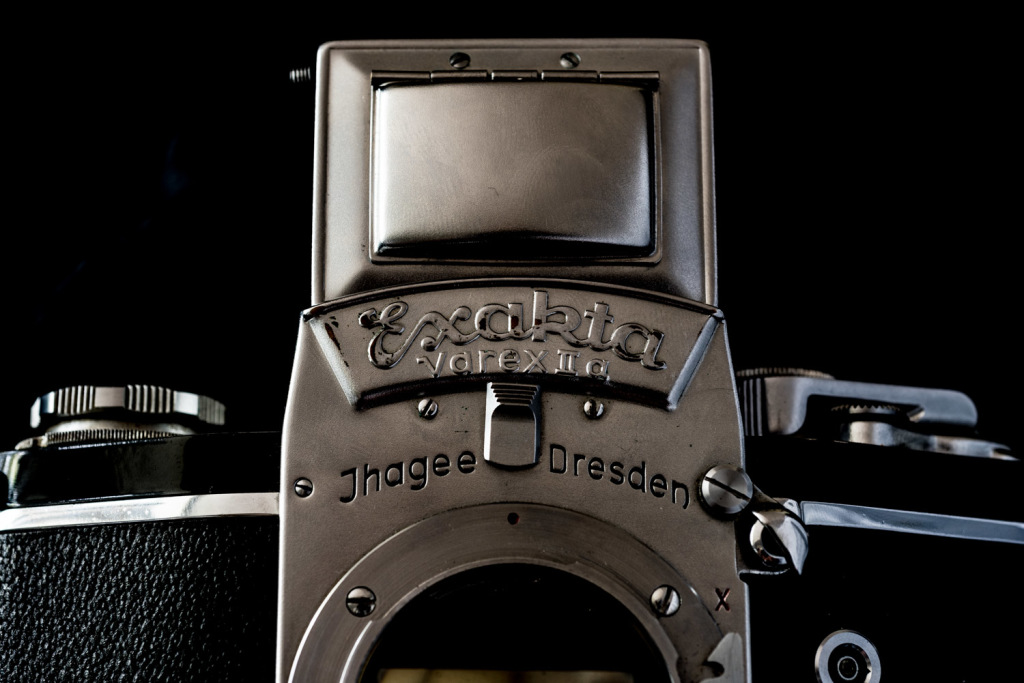 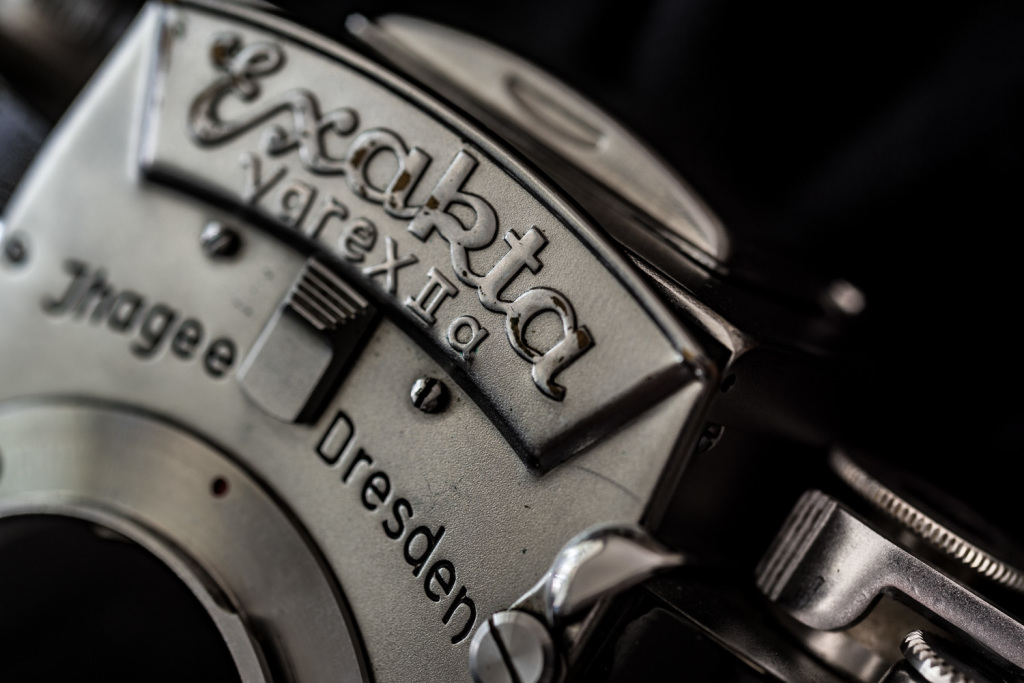 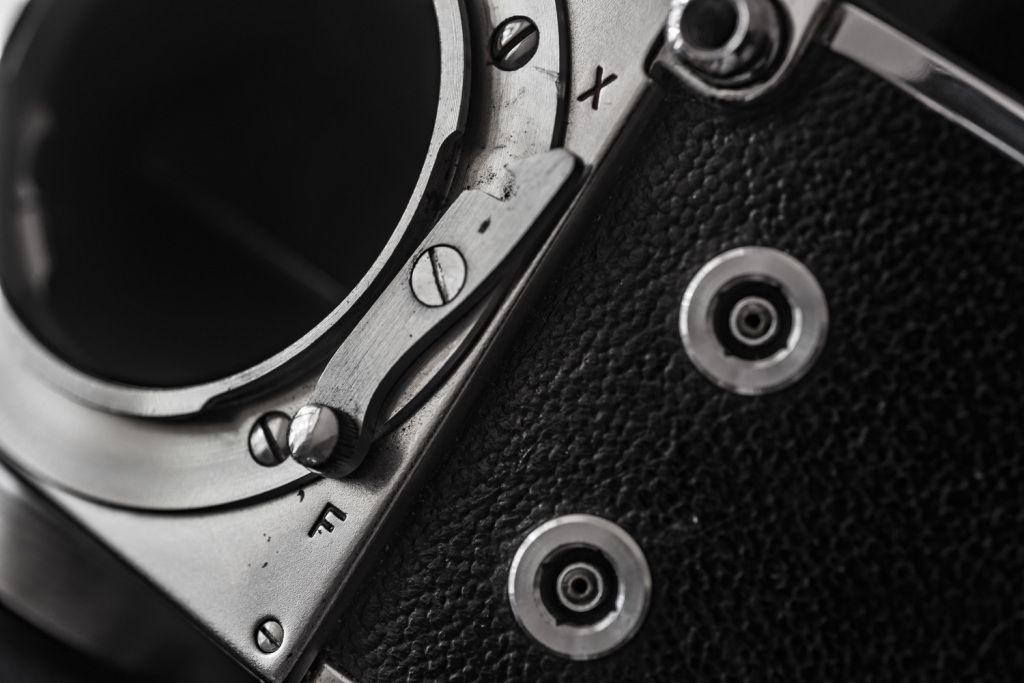 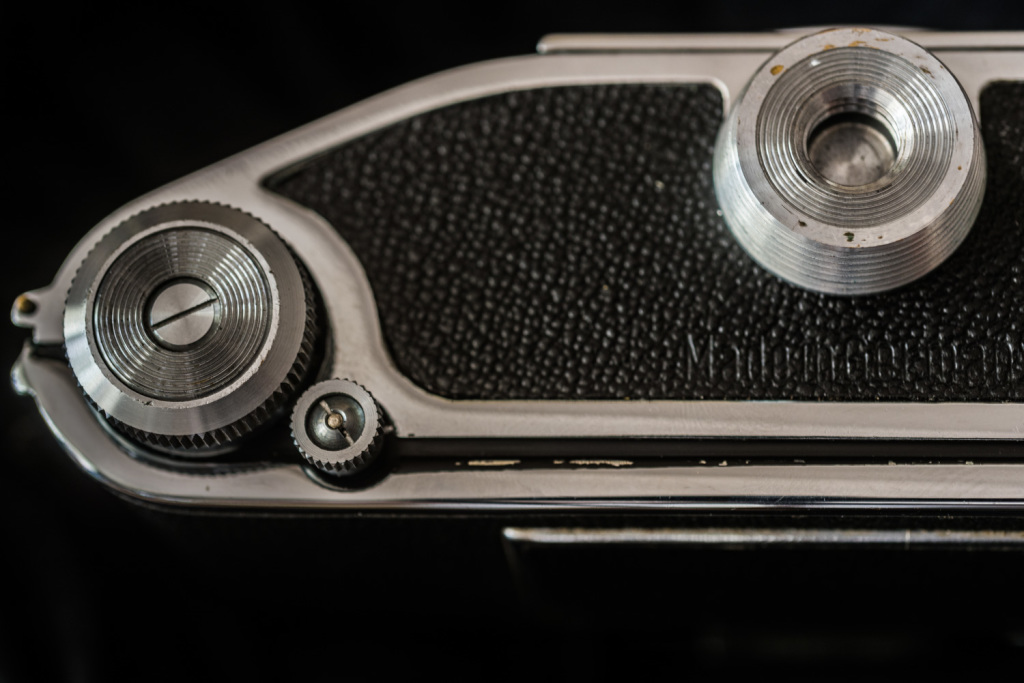 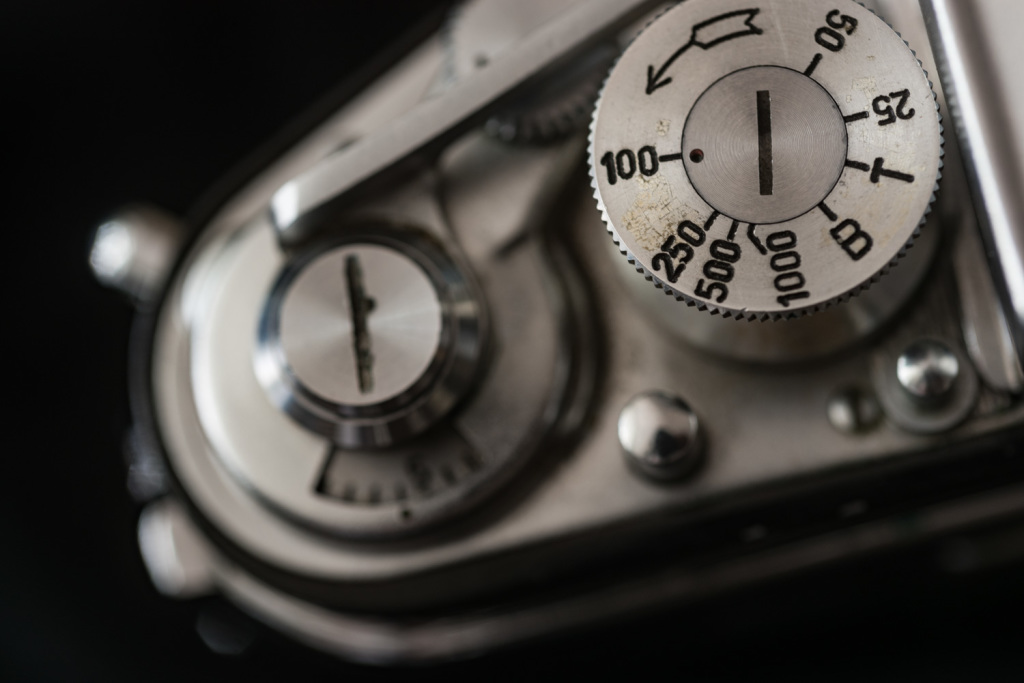 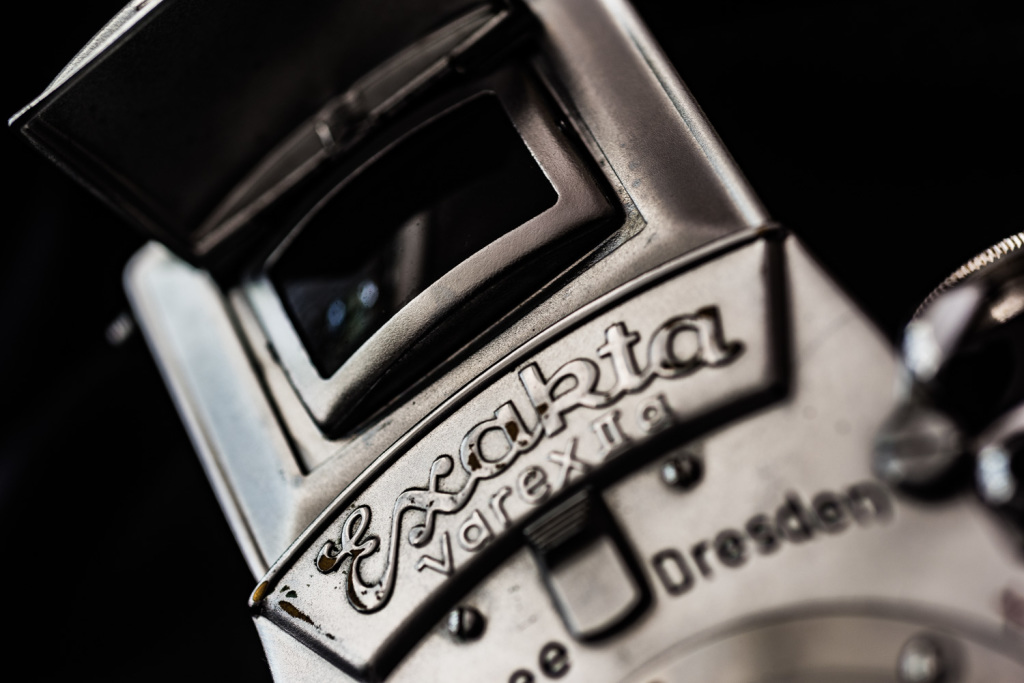 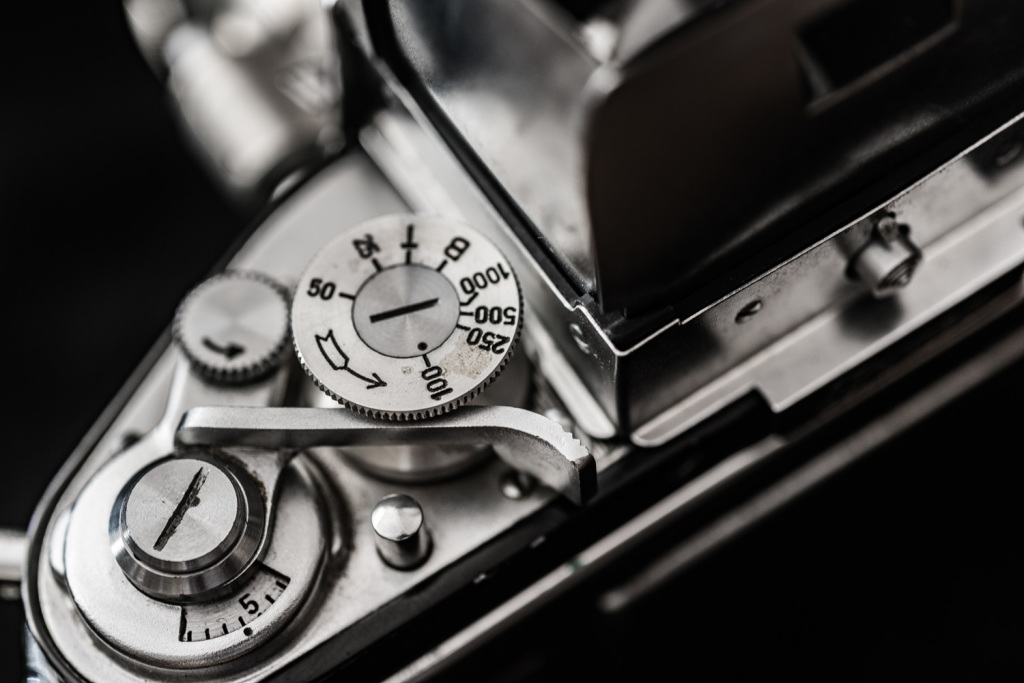 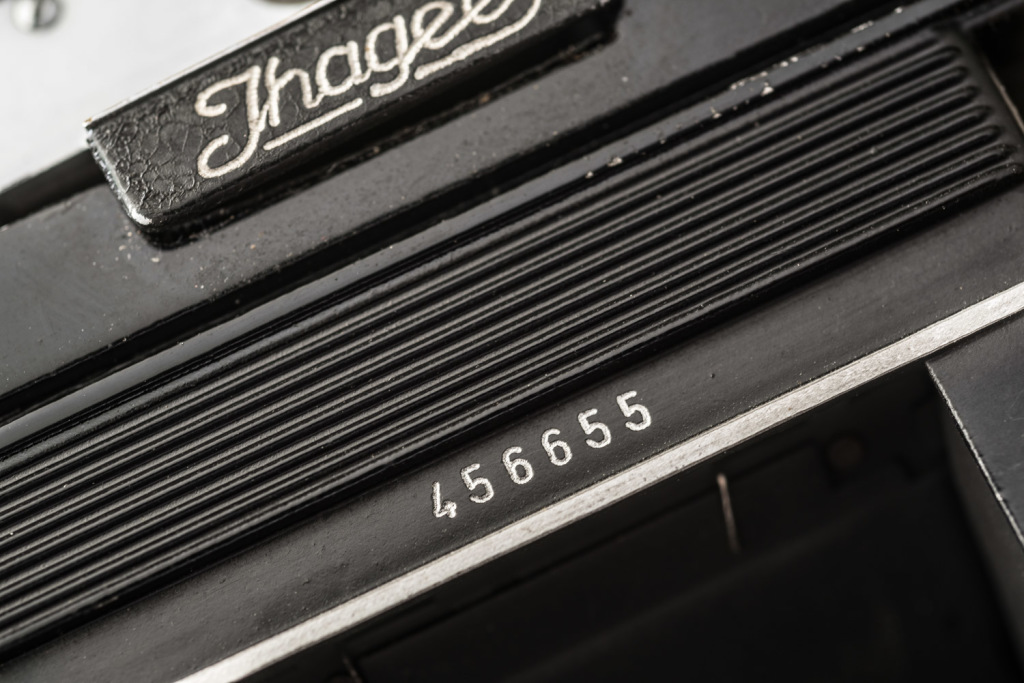 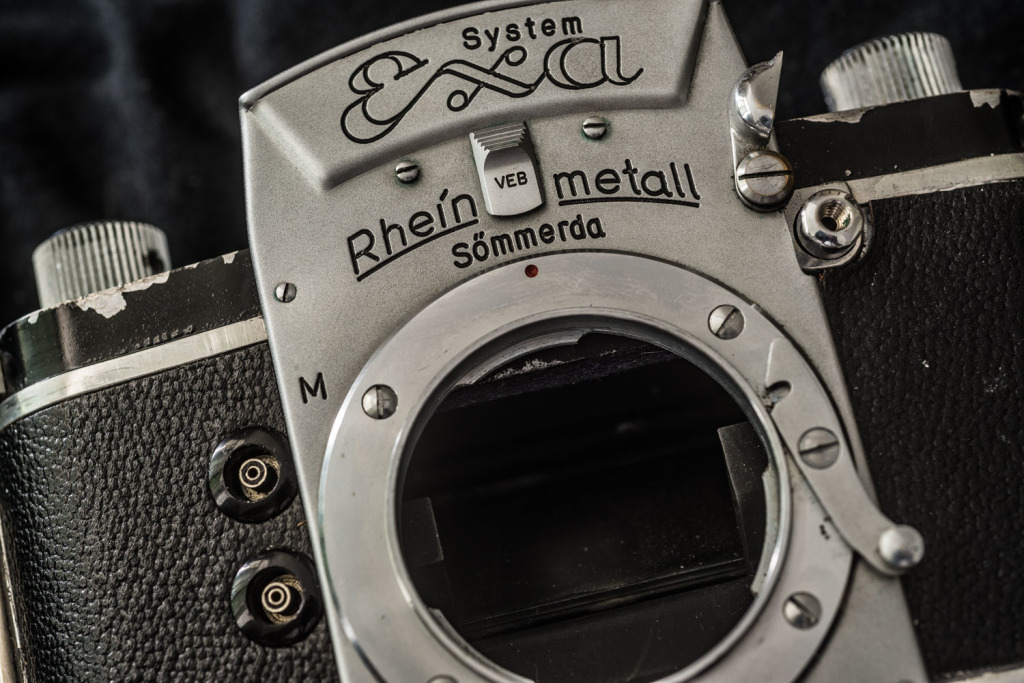 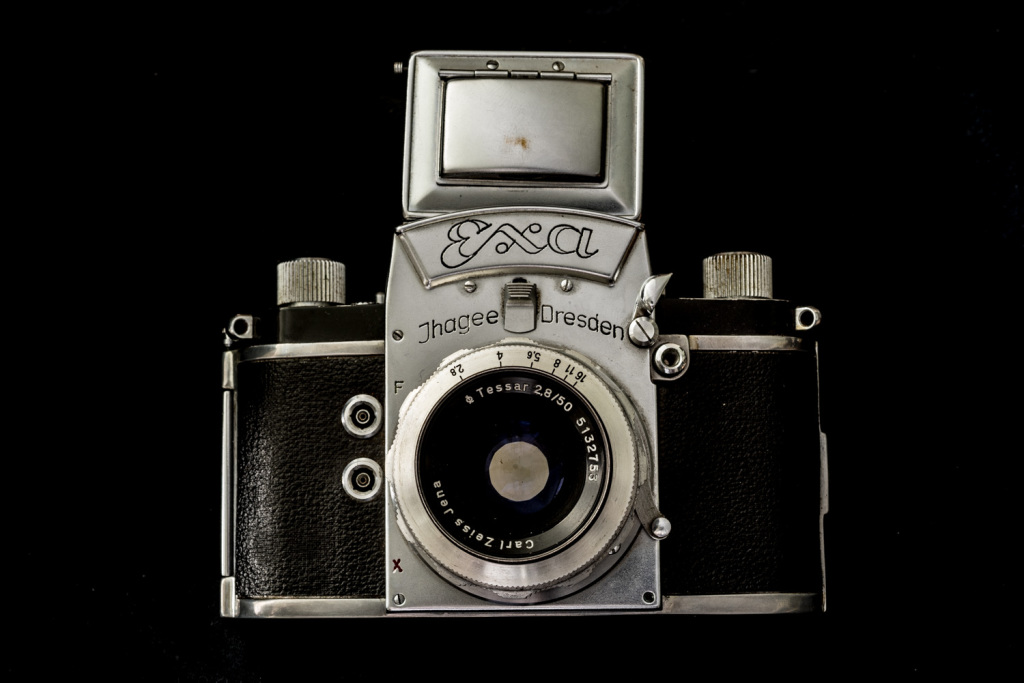 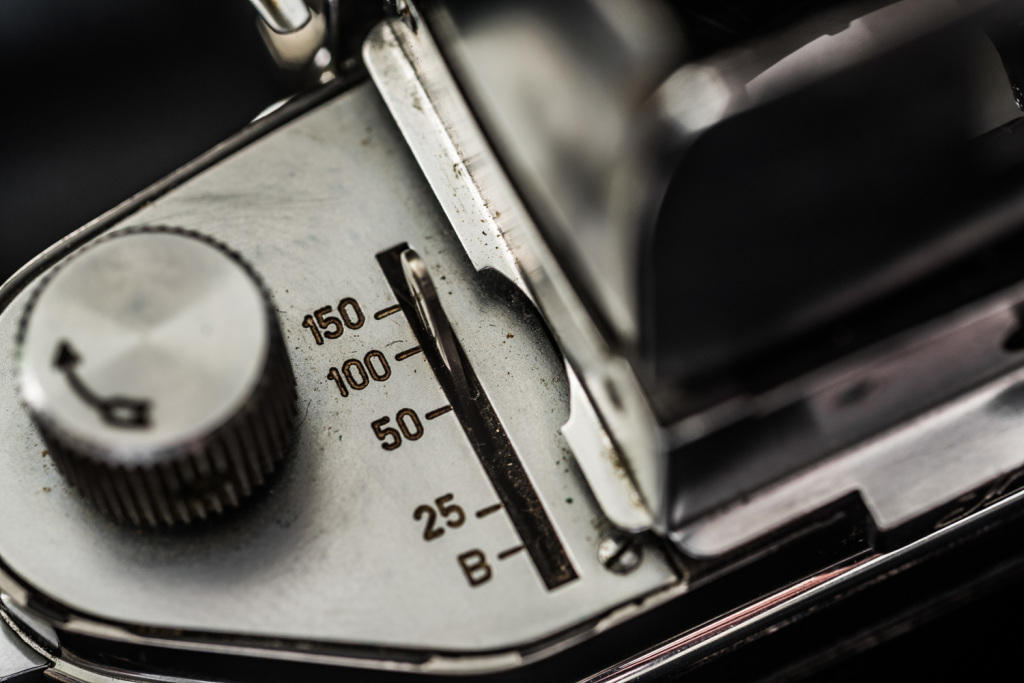 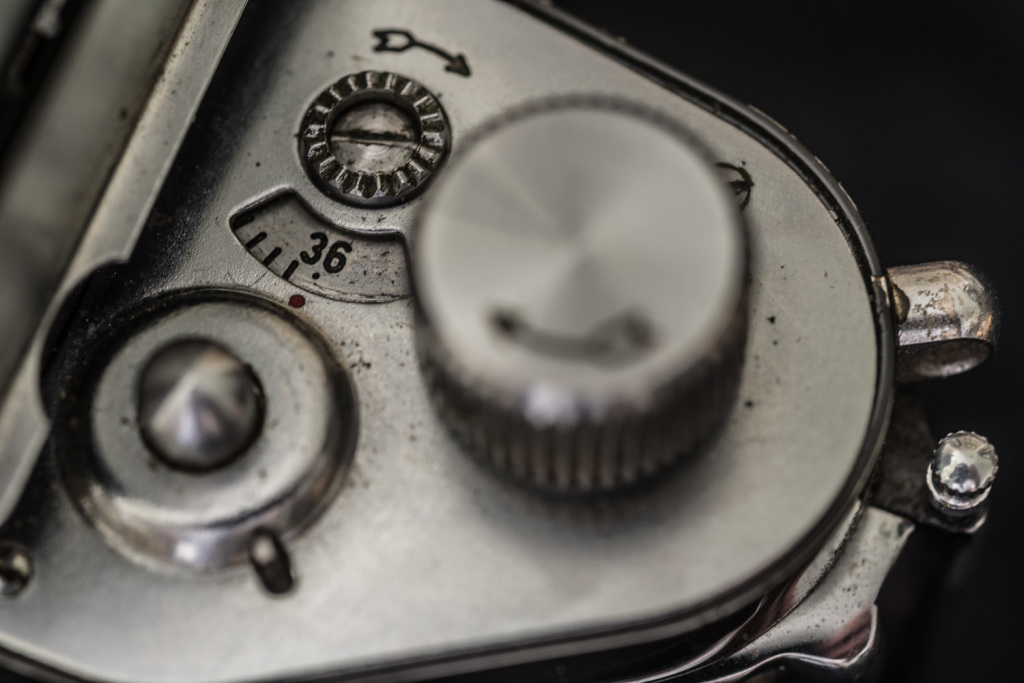