CARTE DE VISITE AT THE TIME OF THE AMERICAN CIVIL WAR

Portraits of the settlers by J.S. Moore, photographer in Toledo, Iowa 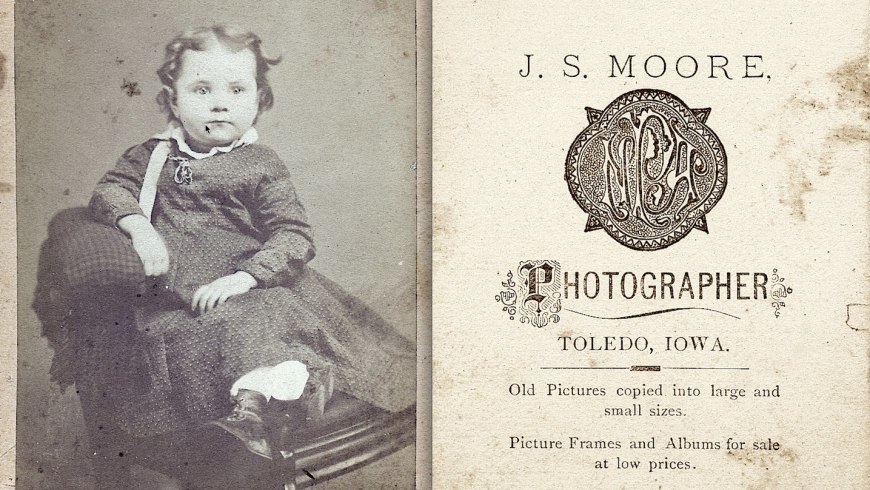 For those who love to inhale the dust that accumulates on old papers it can happen to run into exciting stories. I frequently do. The following is the last of my “discoveries” as a library rat, greedy for “unnecessary papers…”. A few days ago I bought, for twenty dollars, twenty American CDV, (carte de visite) from a stall on the global market of telematic junk (ebay). From the brief description of the “batch” one could tell very little about their ‘exact “amount”. It was clear, however, that the portraits were dated around the 1860’s. An appetizing date. When I opened the packet, that had arrived by express mail from the US in three days, and “browsed” through the small photographs (6.5 cm x 10.5 cm), my first impact was disappointment. The picture quality was little more than mediocre and the conservation conditions just acceptable. I then turned my attention to the “brand” lithographed behind the cards on which, at that time, the photographs (printed with the technique of albumin on very thin paper) were attached and I was surprised, favorably, by the fact that almost all the pictures had a single author: a certain J.S. Moore, with a studio in Toledo, Iowa.

A speedy Google search paid off in a flash, and this story was born.

J.S. Moore (it is not possible to give a search result to the initials) is 25 years old when in 1857 he arrives in Tama County, Iowa, midwest of the US. Born in Pennsylvania, in Centre County, he had been taken, still in nappies, by his parents to Ohio. There, at seventeen, he graduates as a carpenter (and cabinetmaker). Eight years later he marries Miss Mary Miller (with whom he had six children) and decides to move a bit more to the west, to Iowa. It’s not really the Far West, but cities are still to be invented. He arrives in Toledo and for four years he exercises his craft, building houses, churches (he is a devotee of the Methodist church) and saloons. Then he becomes a photographer, in 1861, just when the civil war broke out and the epic of the pioneers began who, in solitary or in wagon trains, were leaving for California, Oregon, Texas and Oklahoma. Only six years later the famous photographer Timothy O’ Sullivan started his recognition travel known as The King Survey. J.S. remains in the newborn Toledo and takes over, from J. C. Miller, what had been the first photographic studio in the county (founded by the Reverend G.G. Edwards) and soon becomes the most acclaimed photographer in and around Toledo. “Paying great attention to business and customer relations he builds up a company that is second to no other in the area”, at least according to what is written, in 1883, by Cyndi Vertrees, Mary Alice Schwanke and Donna Pardun in the repertoire of the citizens of the County of Tama (published in Springfiled, Illinois, by the Union Publishing Company) and as already testified, in 1879, by Samuel D. Chapman in his “History of Tama …” for the Toledo Times Office. From 1893 we have no more news of our man. Neither do we know if he continued to practice in the Broadways atelier, “one door south of Armstrong’s Drug Store” but we do know that his logo changes over the years and evolves according to the current styles. The multiple photo of the service that shows the different rears of the cards is very thorough about this. The brand changes from “J.S. Moore, Photo, Artist,” to the more essential “Moore Photographer, ” (the unnecessary final comma remains, however!) taking on at least seven different connotations.

Who are Moore’s customers? The answer is easy. They are the settlers, migrants in search of fortune that colonize, in those years, the many still almost virgin lands of the Midwest. Those that appear in the photographer’s lens are quite young, sometimes even infants, and always need to take a position that allows them to remain still at least for a couple of seconds: the time it takes the shutter (the photographer’s hat placed and removed in front of the lens?) to transmit to the plate the amount of light sufficient to expose. In order to keep the model at ease, Moore placed a couple of armchairs in the atelier, with tassels hanging from the arms, on which to sit, and a neoclassical semi-column, on which to lean with their right hand (the body weight of the model is always on the right leg) or with their elbow, always the right one (two or more books with strong Moroccan binding piled up admirably ensure the regulation of the support depending on the height of the subject. The children and the young ladies dress in their expensive and unusual best clothes for the occasion of the ceremony. They are in satin or velvet, have many pleats and are not lacking in lace. In some cases, on the collar, up high, also strings of pearls appear as a protection for prying eyes. The hair is brushed with care and the look is (almost) always directed towards the artist. It seems curious that the young men are dressed very uniformly, wearing a jacket with four buttons, rumpled trousers, the same shaped shirt for all, just as the tie. Elements that all seem to suggest that these clothes belong to the photographer who makes them available to customers to enable them to give a tone of bourgeois wealth at the time they surrender themselves to history. Only in one case the jacket worn is different, it has slanted pockets, and also the “client” seems more accustomed to the suit he is wearing: probably it is his. In the group photo the felt boots worn by two young men who sit in the front row impress, in Iowa winters are harsh! The backdrop remains to be mentioned. Since it appears it is always the same: it can’t have been easy to get hold of one in Toledo! But on one occasion, real plants in pots have been added to those painted in trompe l’oeil on the canvas. Three last notations: the pupils of all the portrayed characters are always blackened with a touch-up, sometimes a simple dot, not too accurate: many of them had to be the settlers in Toledo with clear irises, typical of immigrants from northern Europe, that in the picture came out transparent and therefore not very agreeable; the lens that Moore uses is always the same (and does not seem of excellent quality); and finally, in one of the versions of the logo the painter’s palette and the camera both appear (a wooden model, very primitive) almost a demonstration that the legal actions between photographers and portrait painters were still far from finding a composition.

Note: in only one case the photograph is glued on to the card upside-down. 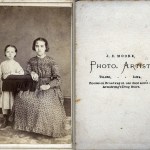 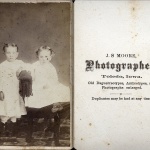 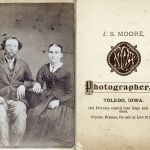 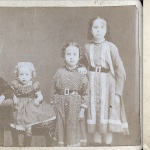 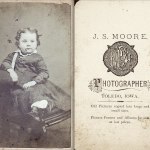 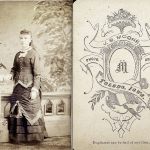 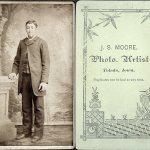 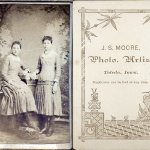 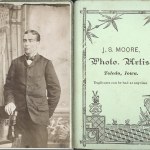 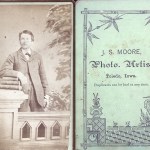 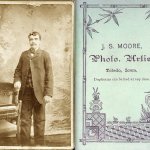 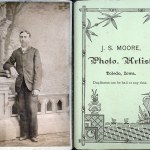 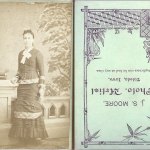 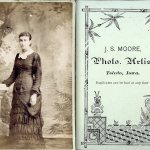 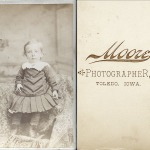 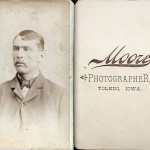 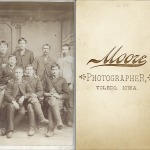