ELECTIVE AND SATANIC AFFINITIES IN FLORENCE
Andrea di Bonaiuto as Haring and Rammelzee? 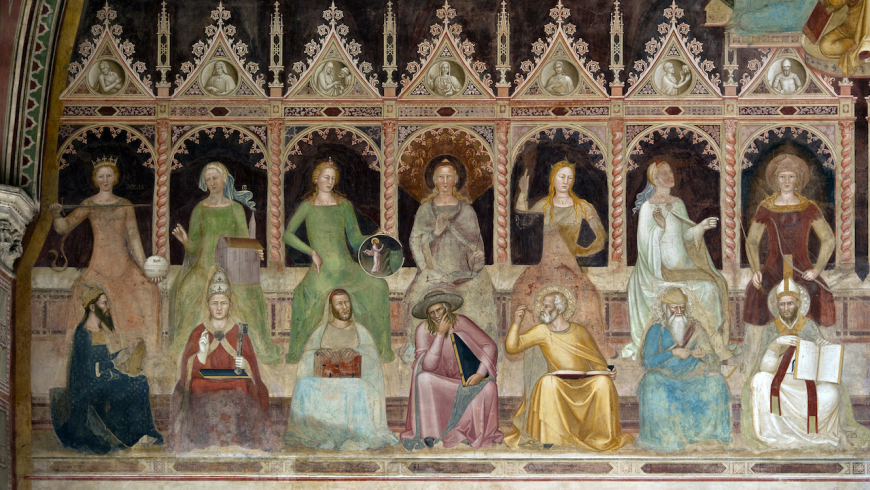 In environments of fabulous and daring unreality, between elegance and sophistication, in a penetrating, almost phosphorus, brightness, like a Disneyland of the mind, shine, in Santa Maria Novella in Florence, lush and imaginative stories painted by the Florentine artist Andrea di Buonaiuto, a follower of Giotto in the fourteenth century. In the pictorial cycle one is affected by the thickening of the characters bathed in a light that is no longer simply physical, but as though delivered directly from within. A light that gives sugarcoated shade, amazing pinks, exaggerated yellows, improbable violets that unfold between anthropomorphic or zoomorphic elements, brooches, bracelets, mantles, fangs, bizarre shaped beards, slippery and stylized animations of shapes and figures. It was in 1367, when Andrea put a finishing touch to the frescoes in the Sala Capitolare of the Convent of Santa Maria Novella in Florence. A certain Buonamico di Ser Lapo Guidotti had paid for them, in memory of his wife Branda, who had passed away during the terrible plague of 1348.

Today you enter the large chapel from the opening of the green Cloister in the heart of the most important Dominican city complex only to immerse yourself in one of the most extraordinary and fascinating paintings of the Gothic age, in that chamber that the Florentines call the Cappellone degli Spagnoli, since, in the late ‘500s, the bride of Cosimo I, Grand Duke of Tuscany, Eleonora of Toledo, came to town with her rich court that took up residence here. For those who have studied Andrea Buonaiuto the misfortune of criticism of the cycle is sadly notorious: it is mostly dismissed as the result of a moment of exhaustion of Florentine art, dejected for alleged signs of schematic composition, of inventive decrease; the guilty absence of Giotto’s perspective is denounced and the delay on insignificant details, rather descriptive, if not conventional or pathetic. And no one is silent in front of the boredom of the celebratory tone with which the role of the Dominican order is enhanced, in terms of history, particularly with regard to the struggle of heresy for the salvation of Christianity. The attention rather focuses on the right wing stories, where the militant Church, started to walk along the Via Veritatis, gathering religious authorities around a surprising Santa Maria del Fiore, with its dome, in a time when no one knew how to solve the static problems that the coverage presented, and therefore well in advance of nearly a century than the Brunelleschi solution. Along the side of the cathedral crowds gather around the Pope, religious and respectable citizens, alongside men of very different social conditions, to represent the flock of Christians, guarded by black and white piebald dogs, otherwise called “dogs of the Lord”, from the Latin domini cani, as the Dominicans liked to define themselves with their white and black habits; at the foot of this scene, in allegorical key, piebald dogs chase and then devour the wolves and foxes, defending Christianity. Yet the conventionality of language and celebratory purpose seem to vanish, for the watchful eyes of those who have the patience and the ability to pause, look, enter each story, chase the characters, notice the faces, each one different, strong, singular, expressive. Very variegated is the choice of costumes, amazing anthology of hairstyles and robes. Here, there is a group of carefree youngsters, absorbed in the music, in dance, in the collection of fruit. Not far away, to distract them from being lead astray, the looming faces of Vices, Pride with its hawk, Lust with the monkey, and Avarice. Nearby, in the Descent into Limbo, other details affect the imagination of the observer, and above all here are the monstrous devils, with their bright fleeces, and their monstrous and grotesque grins.

The similarities with such contemporary painting, in the postmodern and trans-avant-guard wake, from the eighties to the present, do not escape. One is reminded of the formal elegance, the attractive colors that in those years were called “rich art”, alluding to the war declared to previous “poor” and ideological “Giotto followers”, as we would say now referring to the categories of the elementary, of the primary, finally supplanted by the return to the pleasure of the eyes. So today the Cappellone degli Spagnoli – between effects of crushing and linear stylization, stories and descriptions – can appear not far away from the beautiful imagery of a video game; and Andrea di Buonaiuto be remembered for his “Gothic Futurism”, worthy of a 1980’s New York subway graffiti artist, as Haring and Rammellzee, sprays and lampostyl in hand, in the infinite jungle of ageless tales. 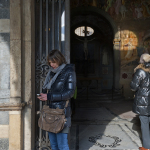 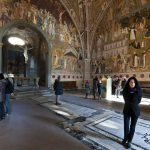 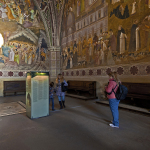 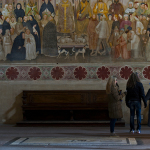 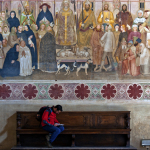 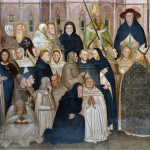 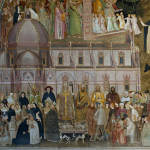 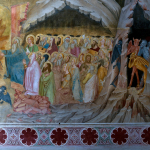 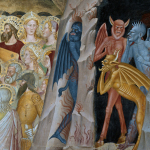 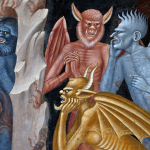 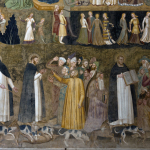 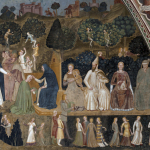 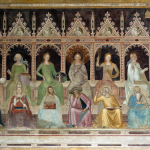 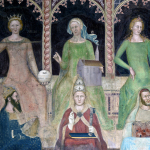 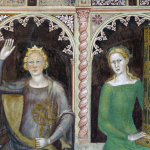 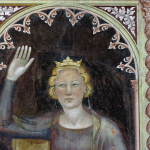 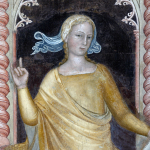 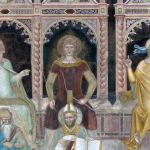 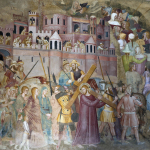 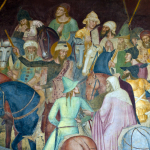 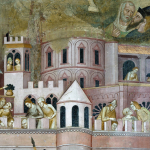 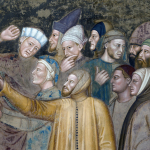 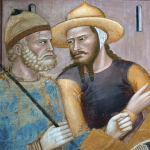 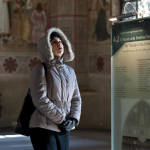 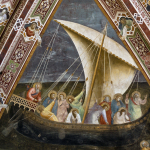 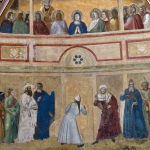 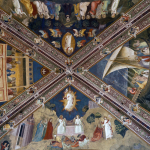