When in 1997, a few months before the transfer of sovereignty from Britain to the People’s Republic of China, for the second and last time I visited Hong Kong, my objectives paused with attention on two products clearly of British origin: the architecture of the Hong Kong and Shanghai Bank, completed in 1985 by Sir Norman Foster, and the double-decker tram that passed right in front of the bank, in the Wan Chai station. They were similar to the red ones of my adolescent excursions to discover the swinging London in the years of the Beatles and Mary Quant, and I liked to imagine that Suzy Wong could have used them. The melody of the song dedicated to the world of the young Chinese prostitute, who had been the protagonist of the novel by Richard Mason, of the play

by Paul Osborn and the 1960 film by Richard Quine, had I heard it, maybe too much(?) as a child, blasted from the Juke box’s crackling speakers of a beach house during a long summer. Nico Fidenco sang it, with a nasal voice. Nearly forty years later, I found myself whistling it while, nestled on an uncomfortable seat on the top floor of a tram, I let myself be driven around the island, feeling intoxicated by the Tropic of Cancer’s humid breeze. At that time I thought it would be a good idea to focus on the tram sides using the advertising which covered them for the images’ composition. Years later I read about the 110th anniversary of the HKT, and digging in the archives, I found these photographs, perhaps fallen into oblivion for their excess of visual oscurity. I have decided to publish them. Here they are. 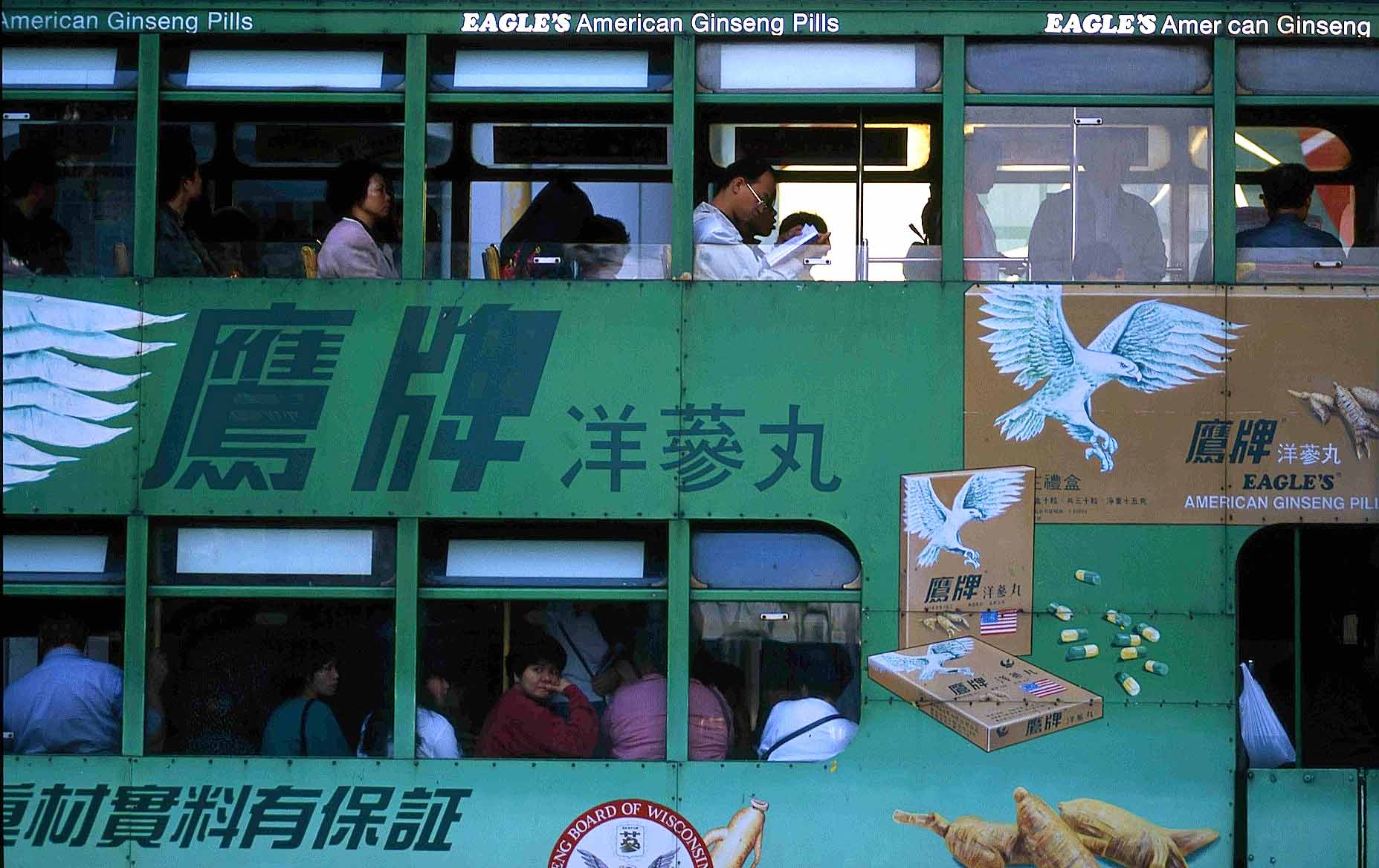 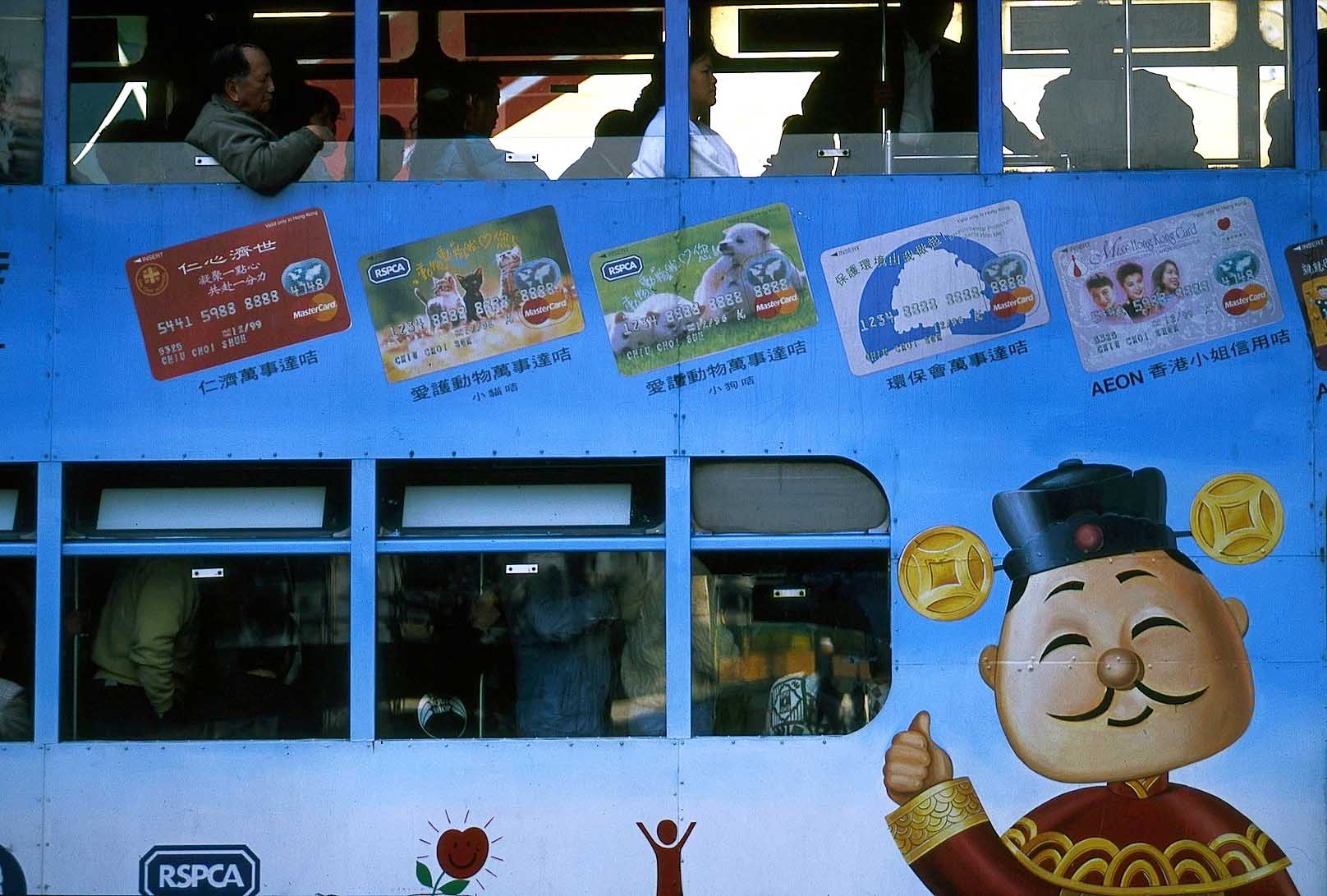 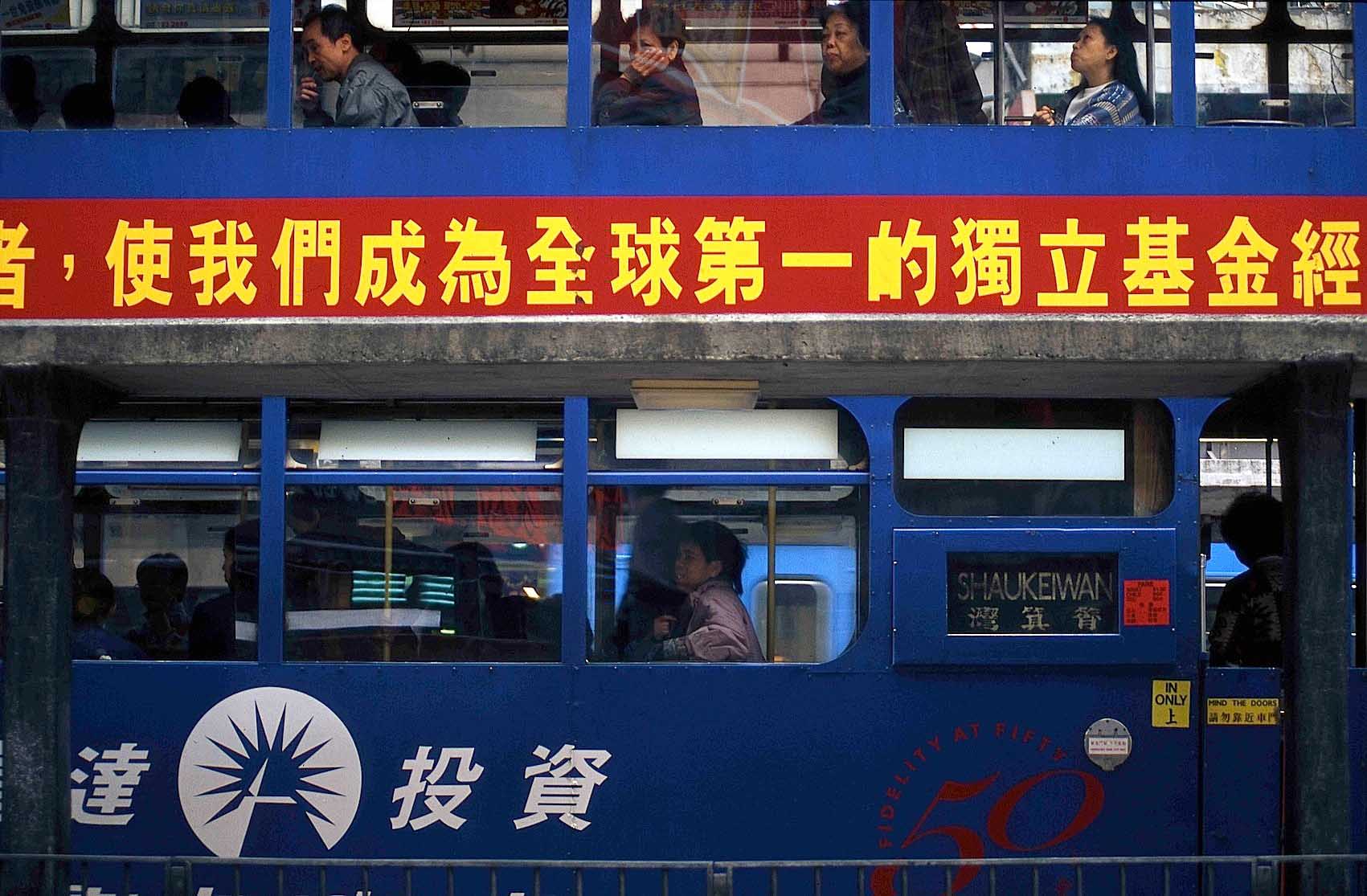 Hong Kong Tramways is one of the earliest forms of public transport in the Chinese metropolis. Owned and operated by Veolia Transport, the tramway runs on Hong Kong Island between Shau Kei Wan and Kennedy Town, with a branch circulating Happy Valley. Trams in Hong Kong have not only been a form of commuter transport for over 100 years, but also a major tourist attraction and one of the most environmentally friendly ways of travelling on the island. It all started in 1904 when bodies of the first fleet of 26 tramcars were built in the United Kingdom. They were then shipped in pieces to be assembled. The tramcars were all single-deck. Ten tramcars were designed for first class passengers and the others were for third class passengers. The first-class compartment was enclosed in the centre with two long benches on both sides, with both the front and back ends open. Seating capacity was 32 passengers. The third-class tramcars were open-sided, with six sets of benches running crossways, back to back, seating 48 passengers. Tram fares for the first and the third class were 10 cents and 5 cents respectively. Initially, the company planned to divide the trams into 3 classes, but subsequently only first and third class were chosen for ease of operation. Owing to strong passenger demand, the first double-deck tramcar was introduced in 1912. The tramcar had an open top design, fitted with garden-type seats. The first class occupied the upper deck and one-third of the lower deck. Ten new tramcars were constructed. After Japanese invasion of 1941 very limited tram service was provided. Only 12 tramcars were in operation daily from Causeway Bay to Western Market. All single-decker trams were retired. After three years and eight months of Japanese Occupation, all 109 tramcars still remained, but only 15 were operational. By October 1945, 40 tramcars were back in service. Only more than 60 years later Hong Kong Tramways launched the seventh-generation tram on November 28, 2011: a combination of modern interior design with traditional tram body exterior. The face-lift allows tram’s iconic image to be maintained. In 2014 Hong Kong Tramways celebrates 110 years of service. The trams run on a double track tramline built parallel to the northern coastline of Hong Kong Island from Kennedy Town to Shau Kei Wan, with a single clockwise-running track of about 3 km around the Happy Valley Racecourse.  There are 7 tram termini located along the tram line, namely, from west to east,Kennedy Town, Shek Tong Tsui, Sheung Wan, Happy Valley, Causeway Bay,North Point and Shau Kei Wan; some intermediate stops such as Sai Ying Pun,Admiralty MTR Station, Wan Chai, and Victoria Park are also equipped with turnaround facilities so that they can be used as makeshift termini in emergency situations, such as en-route traffic accidents. Hong Kong Tramways now owns 163 double axle double-decker trams, including two open-balcony dim-sum tourist trams (vehicle numbers 28 and 128) for tourist trips and private hire. The trams themselves are sometimes called the “Ding Ding” by Hong Kong people, being the onomatopoeia of the iconic double bell ring trams use to warn pedestrians of their approach. 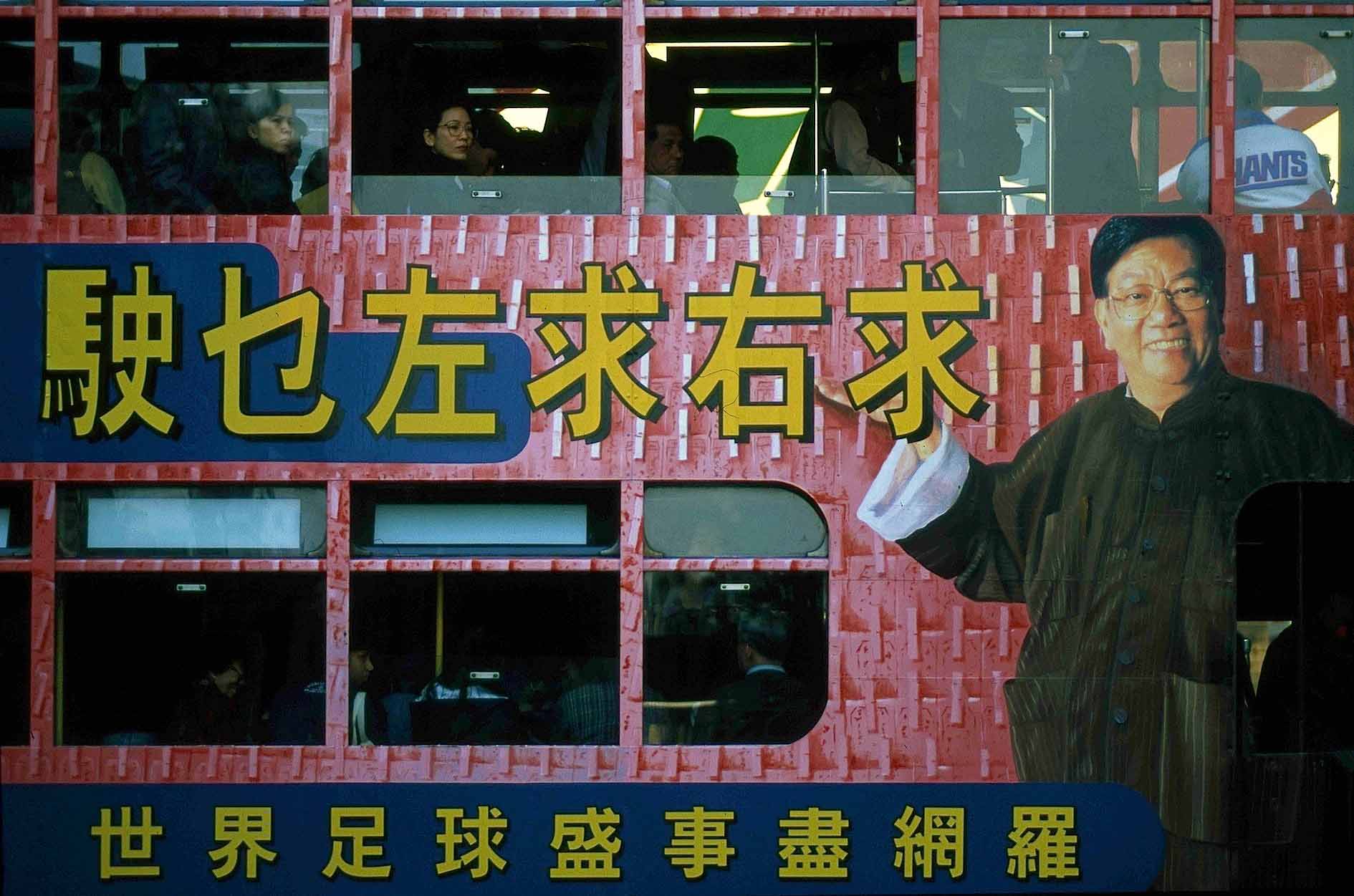 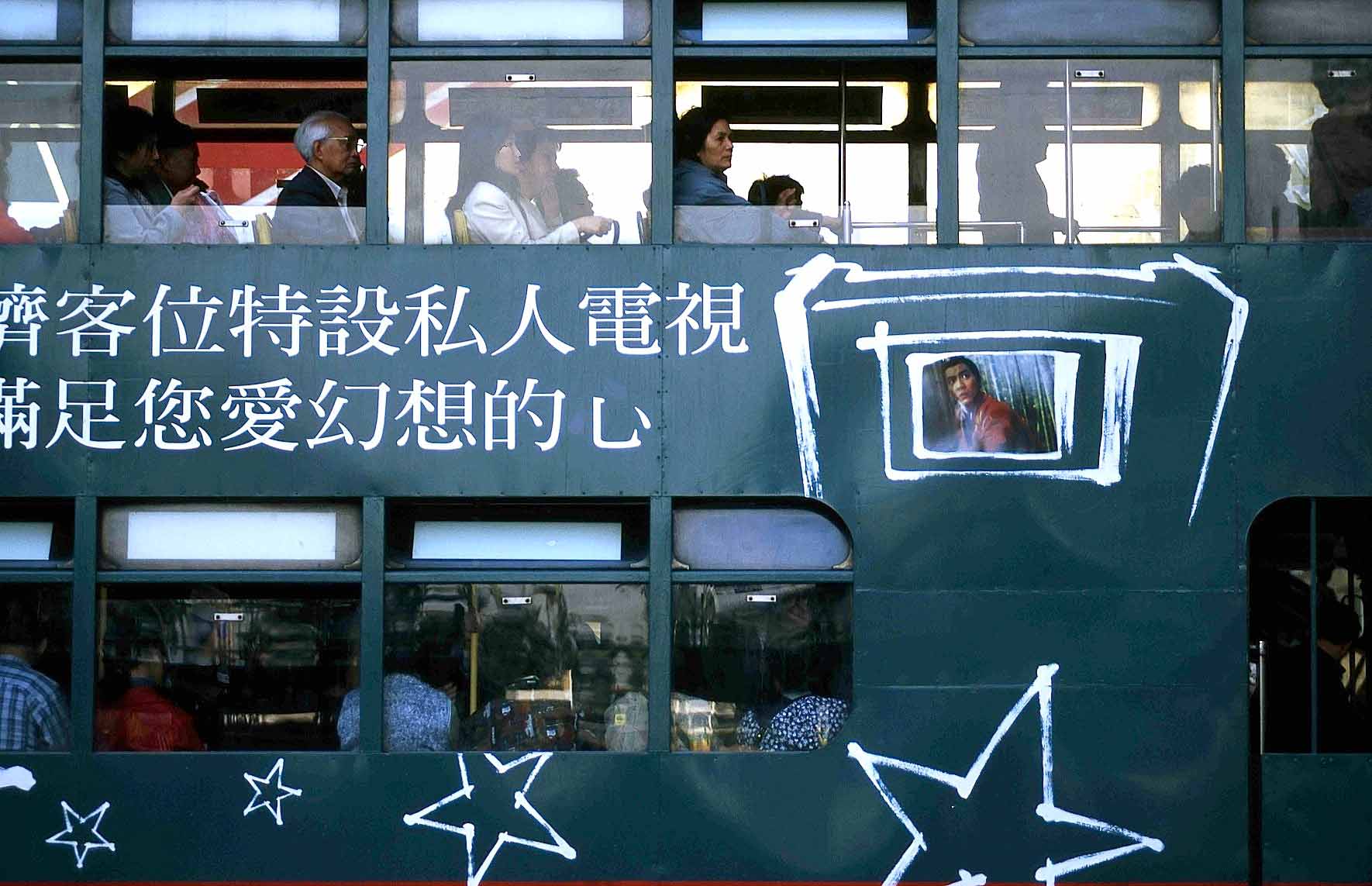