FROM PARIS TO MADRID RACING IN THE DUST

the 1903 rally that marked the end of an era 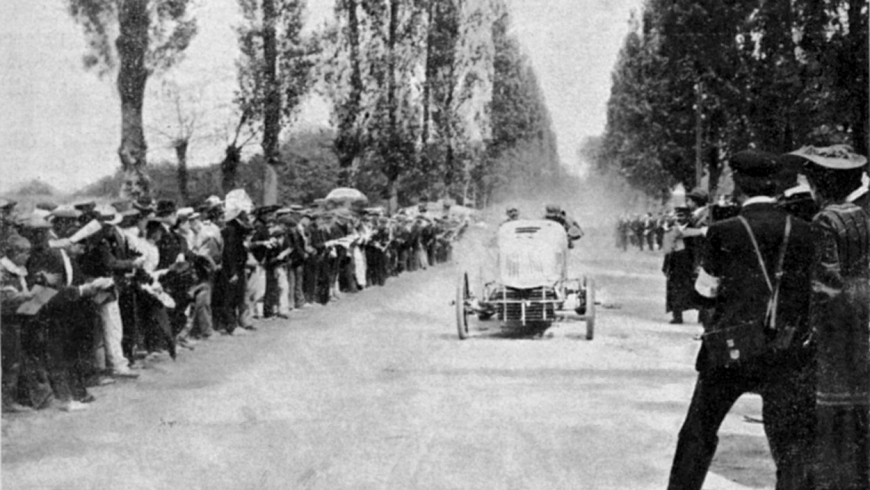 In 1903 when, from the gardens of Versailles, the Paris Madrid departed, “the greatest race since the invention of the car”, the first factories of motor coaches, the De Dion Bouton et Trepardoux of Puteaux, on the extreme outskirts of Paris, and Benz & C.ie from Mannheim, are exactly twenty years old. The proto cars are electric (in 1898 Gaston de Chasseloup-Laubat establishes an electric car with the world speed record of 63.14 kph and the following year Camille Jenatzy exceeds 100kph with La Jamais Contente, a kind of torpedo on 4 wheels ) go on coal, wood and especially alcohol and oil: the petrol engine will conquer the market only in the years of the first World War. On May 24th, at the start of the race, which foresees three stages, with stops in Bordeaux (552 km) and Vitoria (335 km), for a total of 1307 km, will have 170 motorists competitors, divided into three classes, depending on the weight of the car , and 54 motorcyclists. In both heavier classes the presence on board of a mechanic is mandatory who should not weigh less than 60 kilograms!

The cars, as in the regulations, would depart at two-minute intervals, refueling and repairs may only be made during the race and not in the closed park foreseen for the night shelter of the car. The booklet with the times recorded in the checks must be kept in sealed boxes inside the body of the cars.

Experienced drivers and famous brands were already lined up to start in the streets of Paris with cars capable of speeds up to 130 km per hour (Panhard & Levassor 70 hp) and even 140 (the Mors of Fernand Gabriel, Henry Fournier and William Kissam Vanderbilt , cars that have an engine of 9200 cc for 4-cylinders and 60 hp). The brothers Marcel and Louis Renault were driving two cars of their brand, while Vincenzo Lancia and Luigi Storero drove the only two competing Fiat. At the start, the Mercedes are 11. The chronicles tell of the presence of more than one hundred thousand spectators in Versailles, which convinced the organizers to halve the time between one start and the other.

Those responsible for public order had underestimated the event. The “barriers” of ropes are insufficient to contain the crowd that spills on the road. And the soldiers, security officers, are few. And it’s dark. There has been no rain for weeks and after the first kilometer of the route, which was abundantly watered by the organizers, a cloud of dust rises to complicate even more the already difficult task for the pilots.

The brawl begins immediately. The first to start is Charles Jarrott, followed by de Kniff and Louis Renault. Then, in three hours, all had departed. Jenatzy of Mercedes and Gabriel gain ten positions between Paris and Rambouillet. Moreover, Marcel Renault who started 63rd, in Poitiers, only half way through the race, is already close to the leaders but his contempt of danger will cost him dearly.

Accidents are not missing. The axles of many cars break, and not just those of reinforcement. Many of the trees that shade the streets become the target of not too experienced drivers and more than one car explodes or catches fire. The ditches are filled with carcasses still rumbling with the wheels in the air. The Irish Leslie Porter crashed into the barrier of a level crossing losing the mechanic, Georges Richard does the same, with no respect for a plane tree, in Angouleme. At Chatellerault the Tourand of Brunhot ends up in the crowd and causes the death of a soldier on duty. Camille du Gast, the only woman competing pulls E.T. Stead out of trouble, her partner in the De Dietrich “team” who has not been able to avoid an excited crowd of fans and ended up in a ditch.

At the partial finish of Bordeaux, with plenty of photographers to whom we owe the pictures published here, news is heard of many mechanical failures, many retirements, many dead. There will be eight at the end of the day, and more than a hundred injured. Five pilots sacrificed in the name of speed. Louis Renault that arrives at the finish first, after eight hours of driving, will wait in vain for his brother Marcel, victim, in Couhé Vérac, of an incident that will prove fatal after 48 hours.

A classification on corrected time is drawn up and it soon becomes clear that the leader is Gabriel, at the start 168th and who finished third. He has traveled the 552 km in 5 hours and 14 minutes, with an average speed of 105 km. Madame du Gast, came in at 45th place.

The discouraging news of the disasters reach Paris, by telegraph. The Council of Ministers, convened as an emergency, order the organizers to suspend the race in France and to possibly resume it in Spain. The refusal to continue by the Madrid government was immediate and the big race is finally declared over in Bordeaux. The ranking in that location will be the final one.

Cars that survived are absolutely forbidden even to move. They return to the capital in … train … and in mourning. Racing on public roads is declared illegal. It will be so until 1927, the year of the first Mille Miglia. But that will be another story. 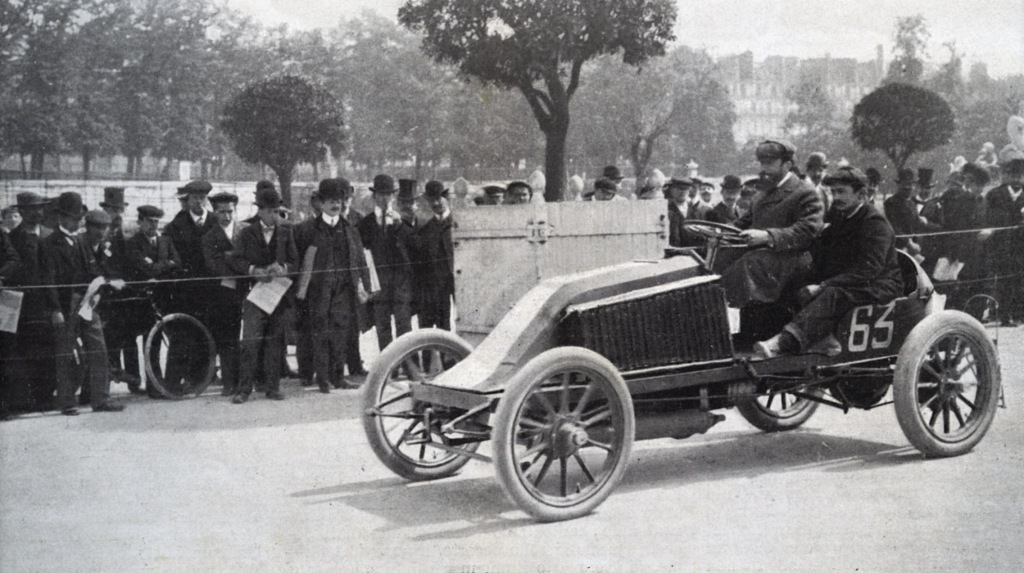 Preliminaries in the Versailles gardens. 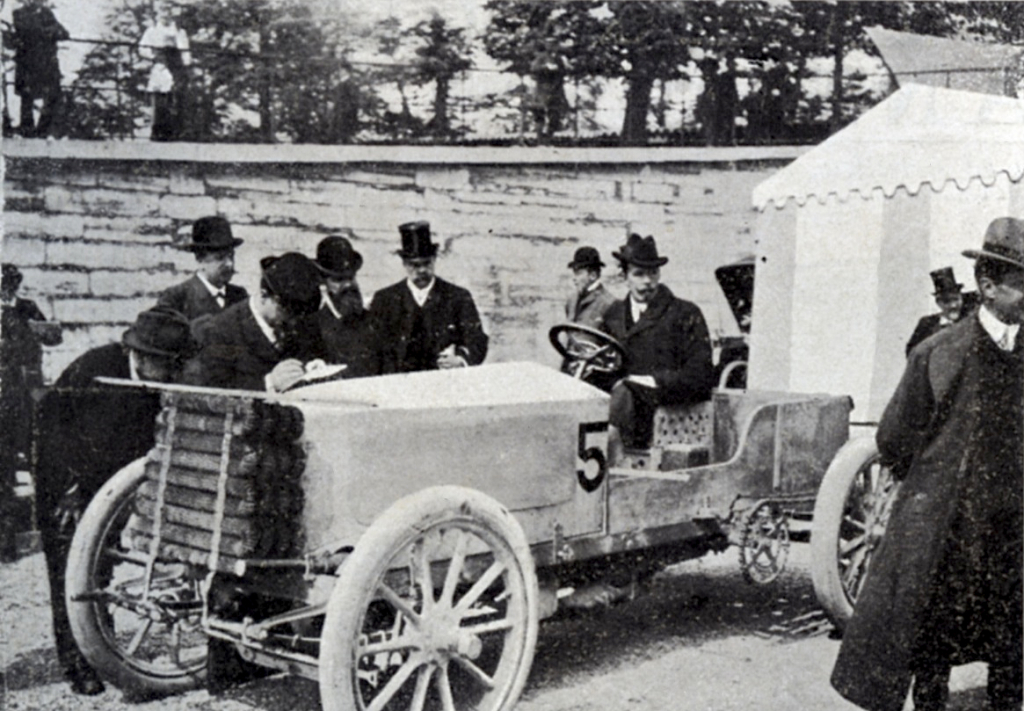 Lorain Barson in Versailles. He will be badly injured and will lose his mechanic. 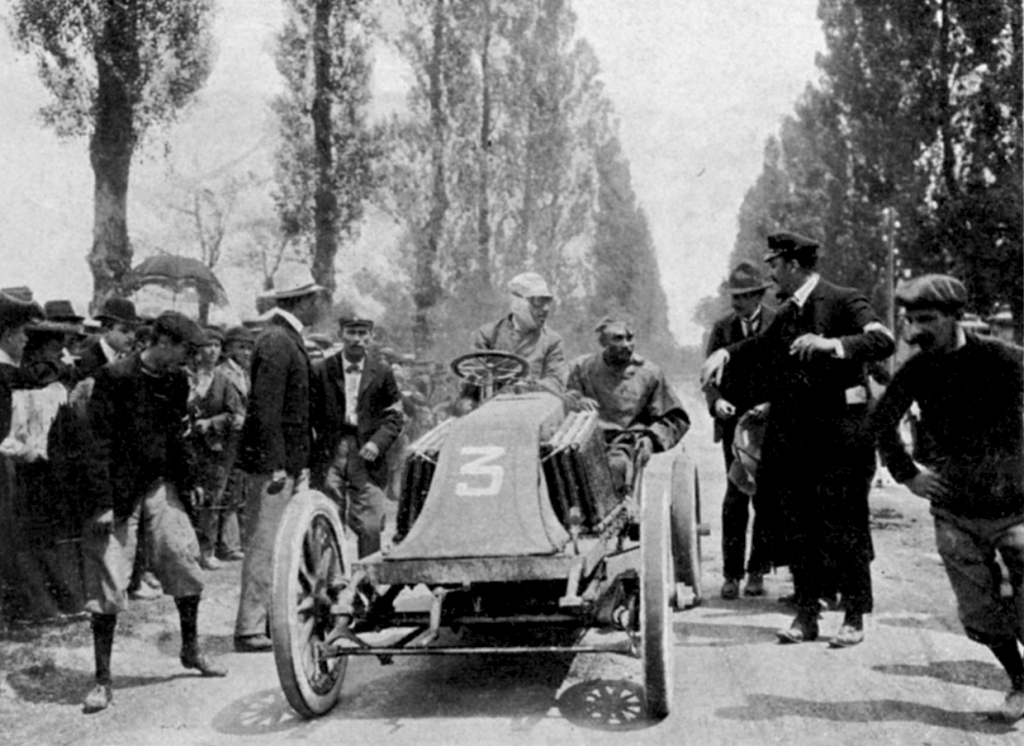 Louis Renault at the arrival in Bordeaux. His brother, Marcel, will die in Couhè Vérac. 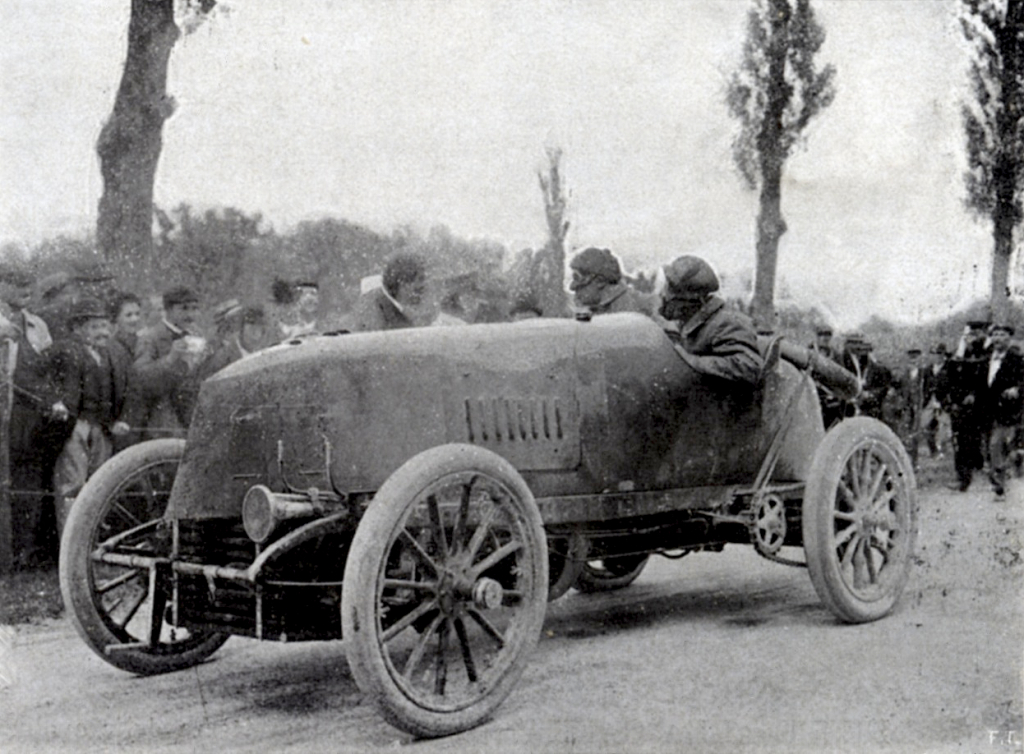 Monsieur Salleron, the third competitor to arrive in Bordeaux. 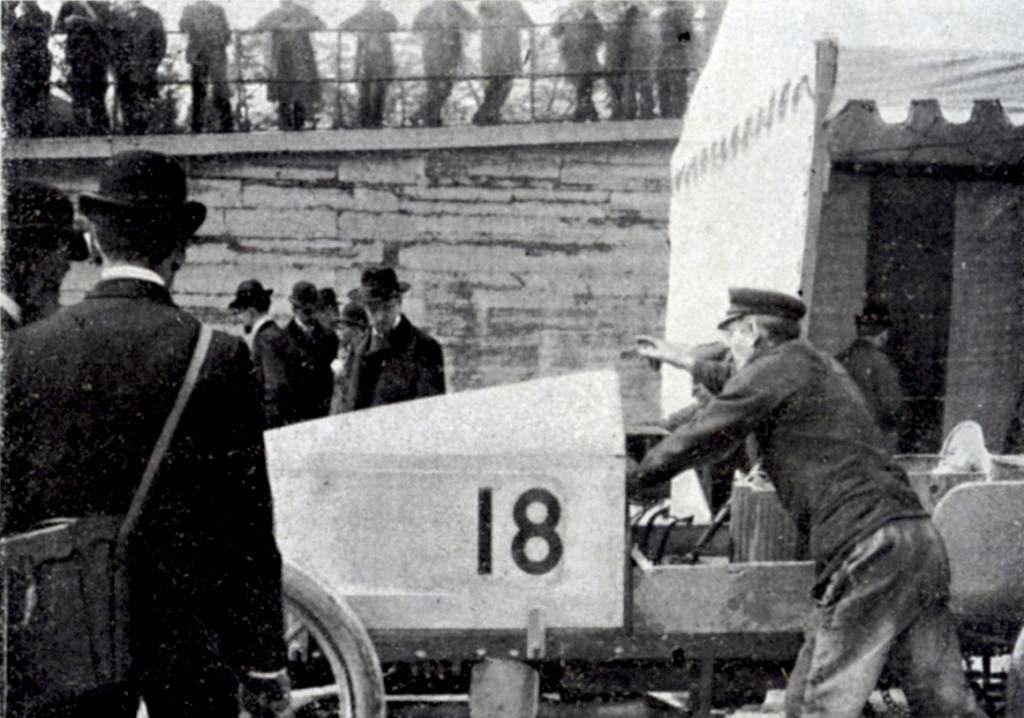 Mr Stead’s De Dietrich in Versailles. The pilot will have a bad accident. 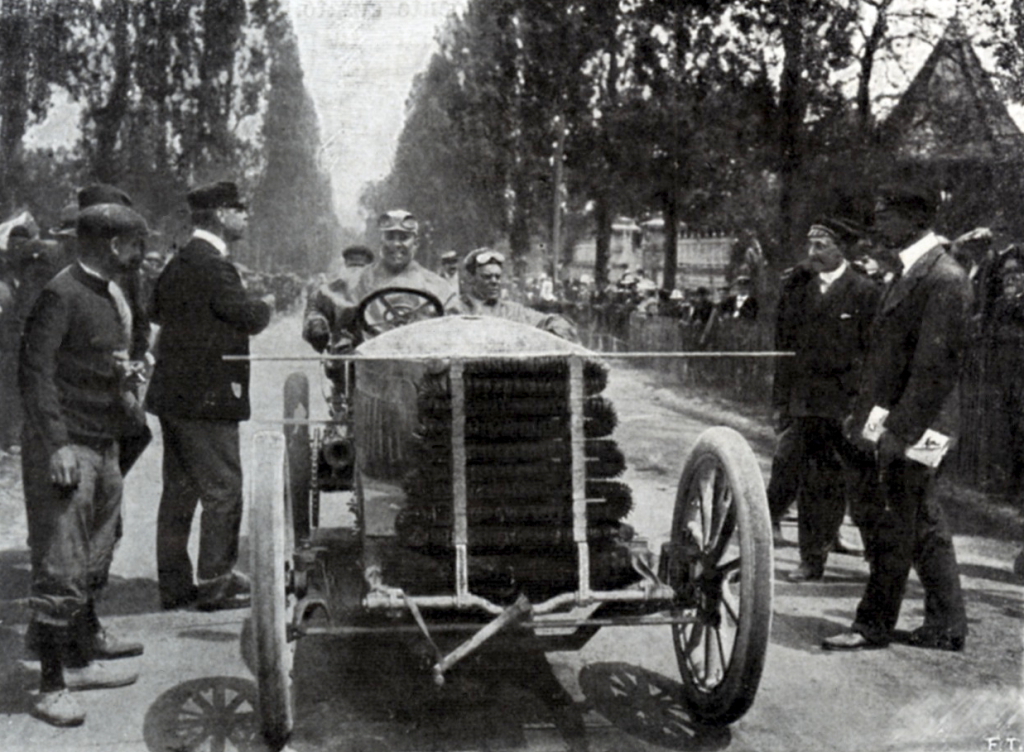 Jarrot, departed with the number 1 and arrived fourth in Bordeaux. 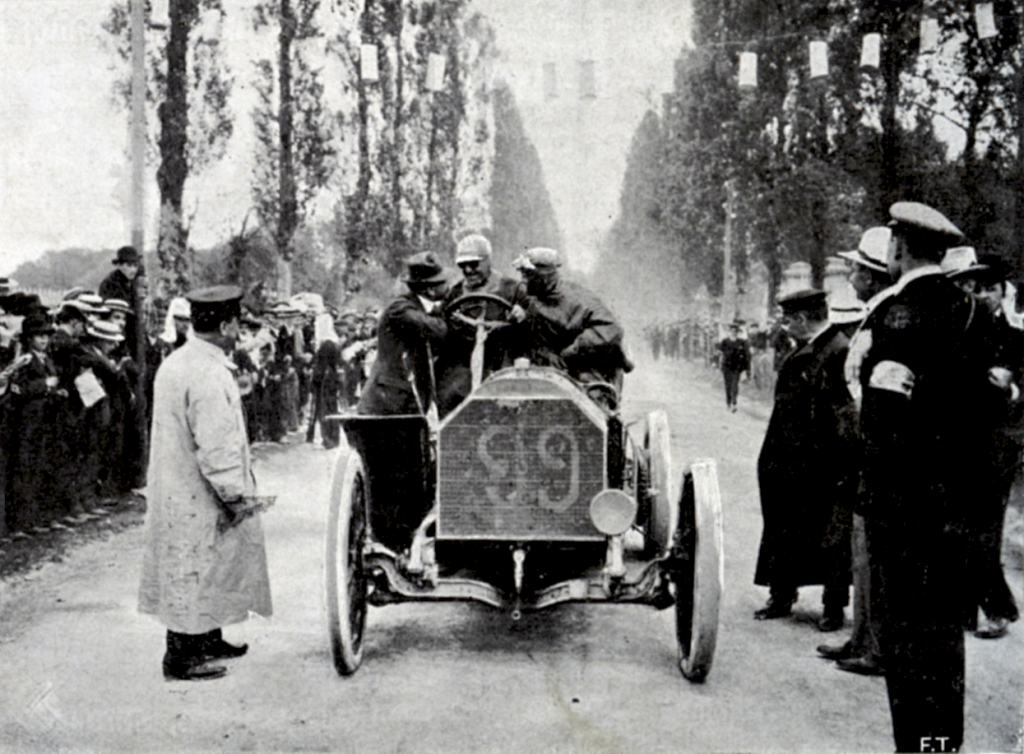 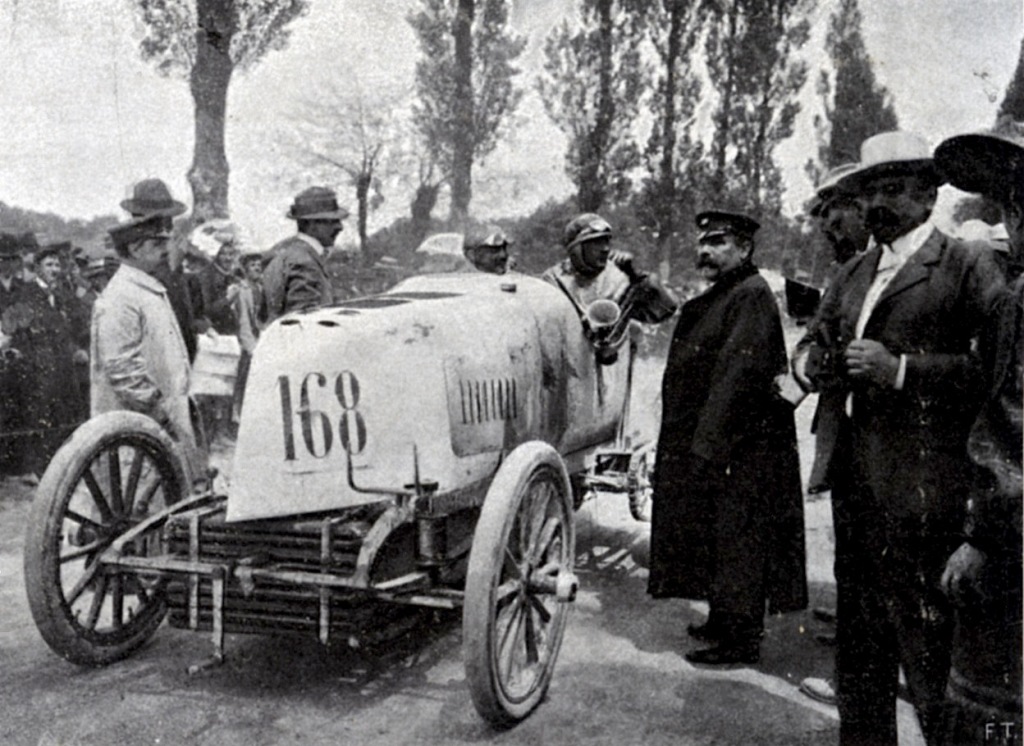 Gabriel’s Mors, he departed 168th and won the race.