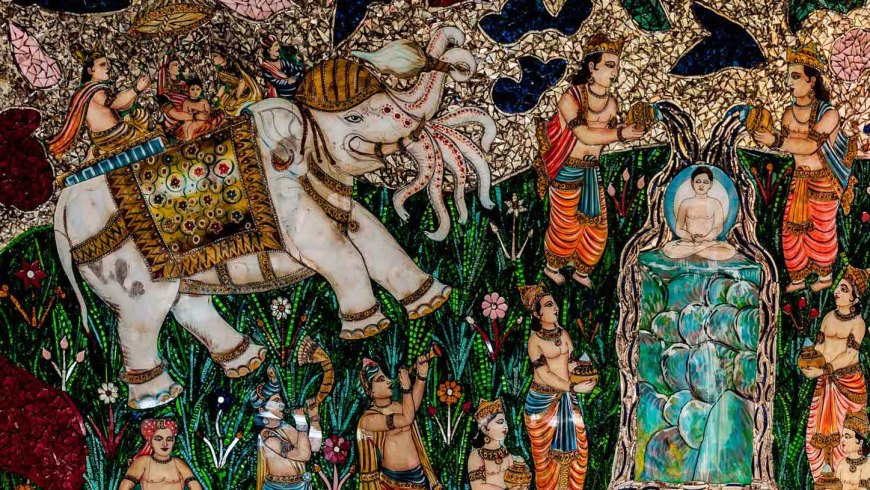 The legend: The Dadabari in Delhi, is the place where Dādā Guru Jinachandra Sūri was cremated. According to the legend, while on his deathbed, he told his followers that when he died the “Mani” (magic jewel) embedded in his forehead would fall out and should be placed in a bowl of milk. He also instructed them that his body should not be kept anywhere while preparing for the funeral. Everyone was so sad, however, that they forgot his instructions and set his body on the ground. When they tried to move it again, it wouldn’t budge. Even elephants were used, but all attempts failed and the last rites had to be performed right there, at the spot where the shrine now stands”.

From the site of National Mission on Monuments and Antiquities (NMMA) of the Government of India: ” The magnificent temple is dedicated to second famous Jain saint Dādā Guru Manidhari Jinachandra Sūri ji. The temple stands in an open courtyard surrounded by a corridoor, which has numerous cells containing small idols of the Tirthankaras. The entrance to the temple complex is through the semi circular arched gateway made of marble that leads to the verandah followed by temple complex. The temple is built in white marble and has numerous pillars carved in exquisite details set with richly carved brackets forming a well designed square structure. The square thus formed create chambers, used as small chapels and contains the image of the deity. The main temple along with Manastambha is planned and a circumambulation path is provided inside the temple. It is planned on the concept of vedis in one hall along with a number of big and small vedi located in the surroundings. The richly carved corridoors, pillars, arches, and mandapa of the temple are simply amazing. The temple has a big hall and vedi in garbhagriha, constructed of beautifully carved and fretted marble ceiling decorated with glass work, with central pendants almost like chandeliers in their delicacy and grace where the main deity is placed, above which Shikhara located with Urushikharas and Amalaka which itself crowned with Kalasha at the top. The interior ceilings have amazing glass and silver artwork, to give it a really rich and vibrant feel. The ceiling is ornamented with designs of lotus buds, petals, flowers and scenes from Jain mythology. The most amazing in this temple is the extensive glazed mirror work. One of the main shrines is a room completely adorn with plain as well as stained glass work. There are paintings depicting the Jain stories. One of the paintings depicts the marriage procession of Neminath and his dejection from the world at the same time and the story of his fiancee following him to the saintly world. In one of the corridoors, there are a series of paintings depicting the stories from the life of Dada Guru. Stories from the Guru’s life have been depicted on the glass murals along with other fables and tales from the rich Indian culture. The walls that don t have these glass and silver work are still adorned with carvings and moulds giving them a grand feel. The back wall of the temple is completely carved depicting again the stories and the characters in those stories. The temple houses small shrines of various Jain Tirthankars placed on it in a very aesthetic way within the complex. The principal impression gathered from these temples is the variety of their sections but in harmony with each other. The roof is supported by these columns joined with bracket type raking struts. The spires are built on horizontal courses with successively diminishing squares, laid diagonally to reach to each other, with Amalaka which itself crowned with Kalasha at the top. The ground floor of the temple has a big hall which is used for conducting programs and small rooms in the surroundings, used for other purposes. The temple is a recent work of RCC construction over which cladding of profusely craved white marble, it is modified from the traditional temple plan but it tries to keep the character of the temple”.

A sign posted at the entrance to this sacred building reads: “This is believed to be the oldest Jain Temple in Delhi. It is dedicated to Jain Acharaya Dada Gurudev Shri Manidhari Jinchandra Suriji, whose last rites were performed here in Sambat 1223. Originally built in the late Mughal period, it has been rebuilt later. The birthday of Dada Gurudev is celebrated on Bhadra Sulla Saptmi and Astmi. The celebration is followed by a large gathering on the occasion of Kartik Purnima”. 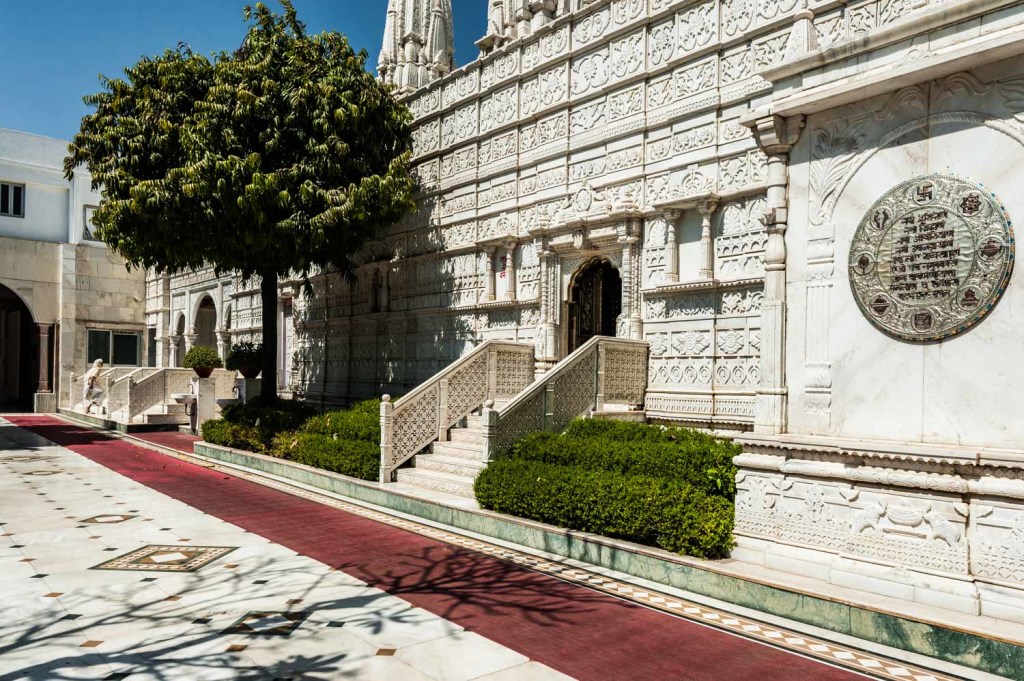 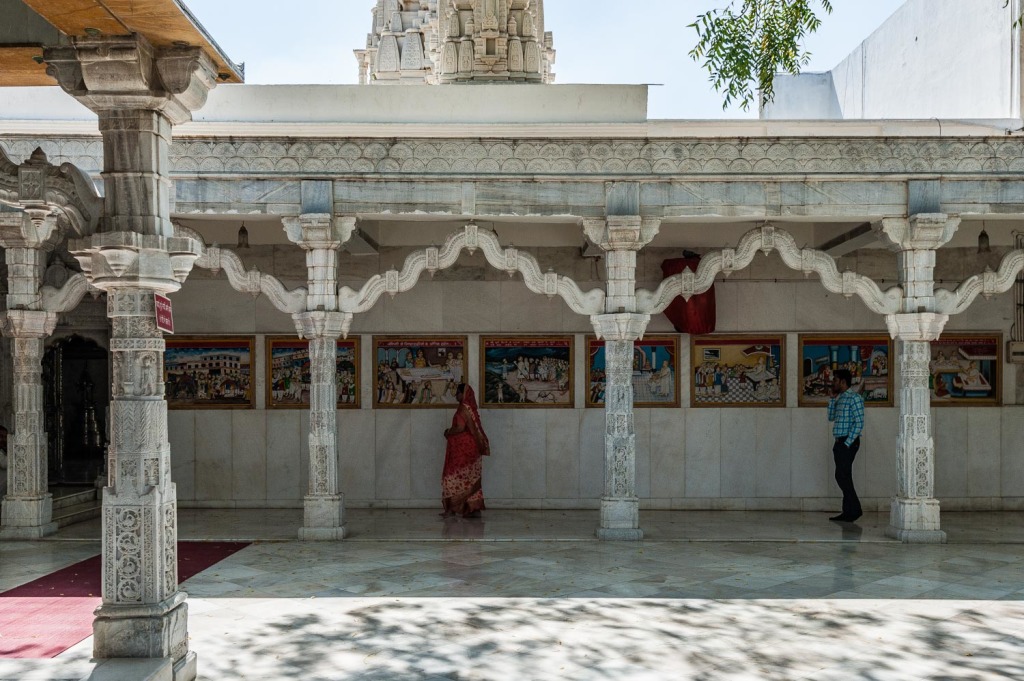 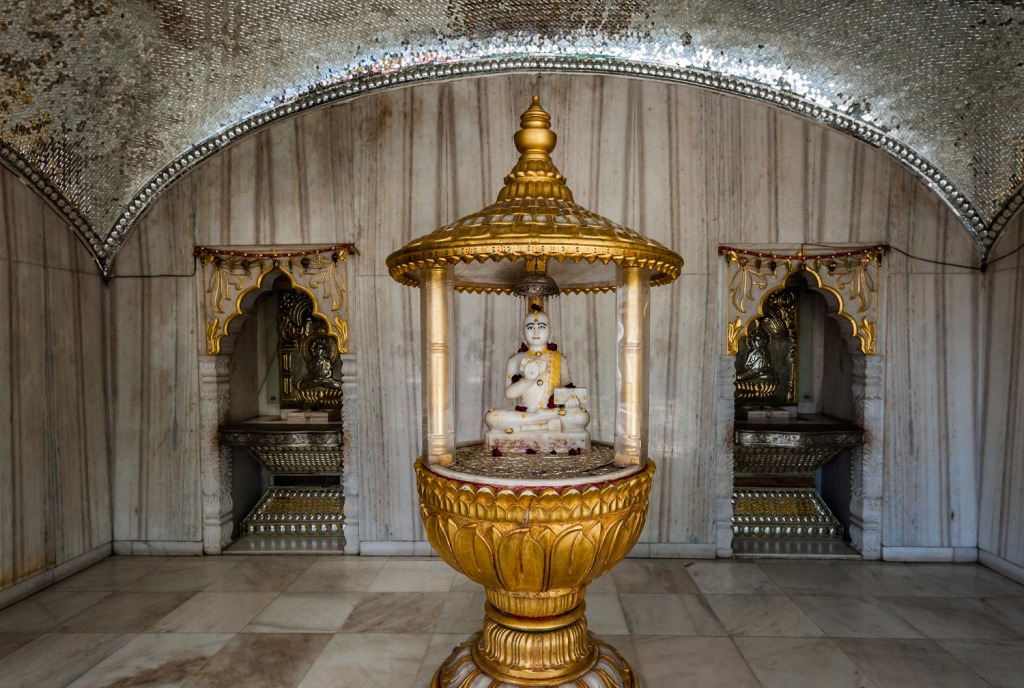 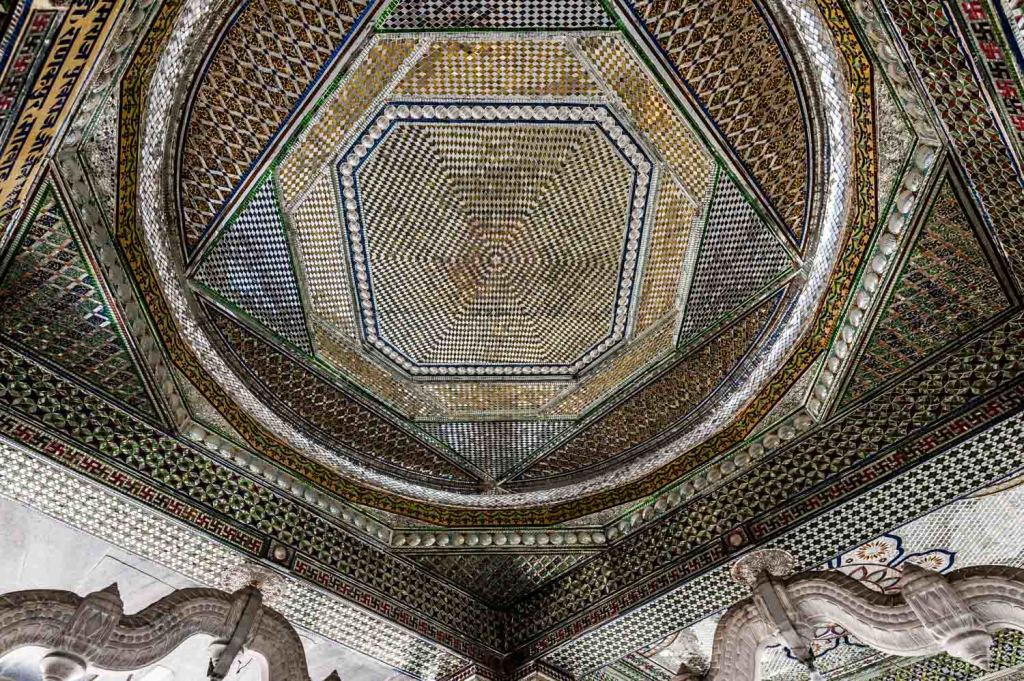 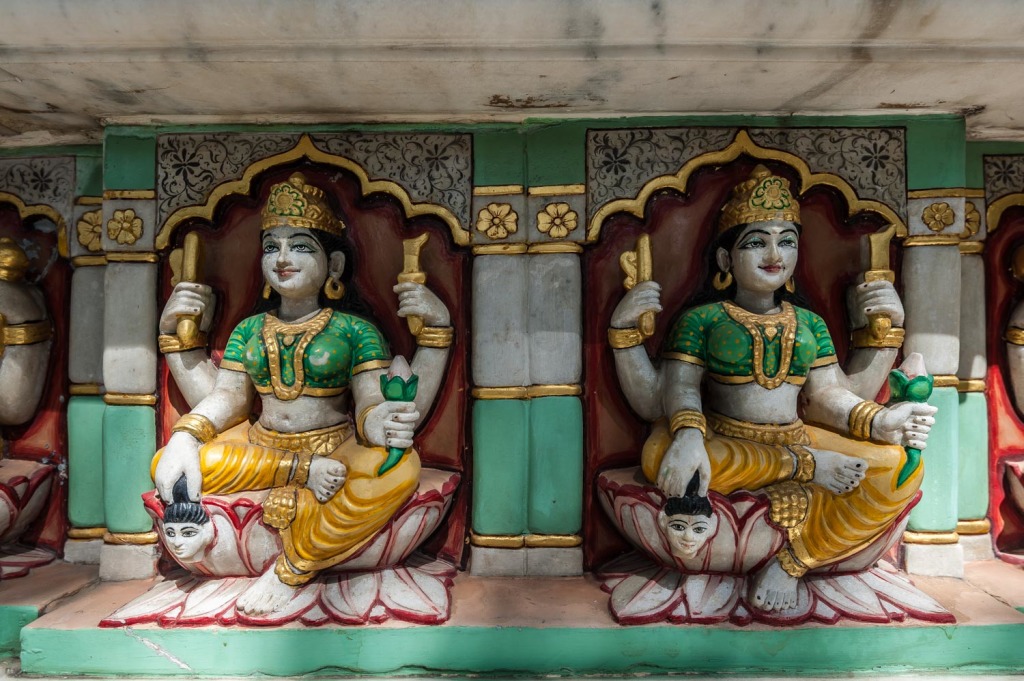 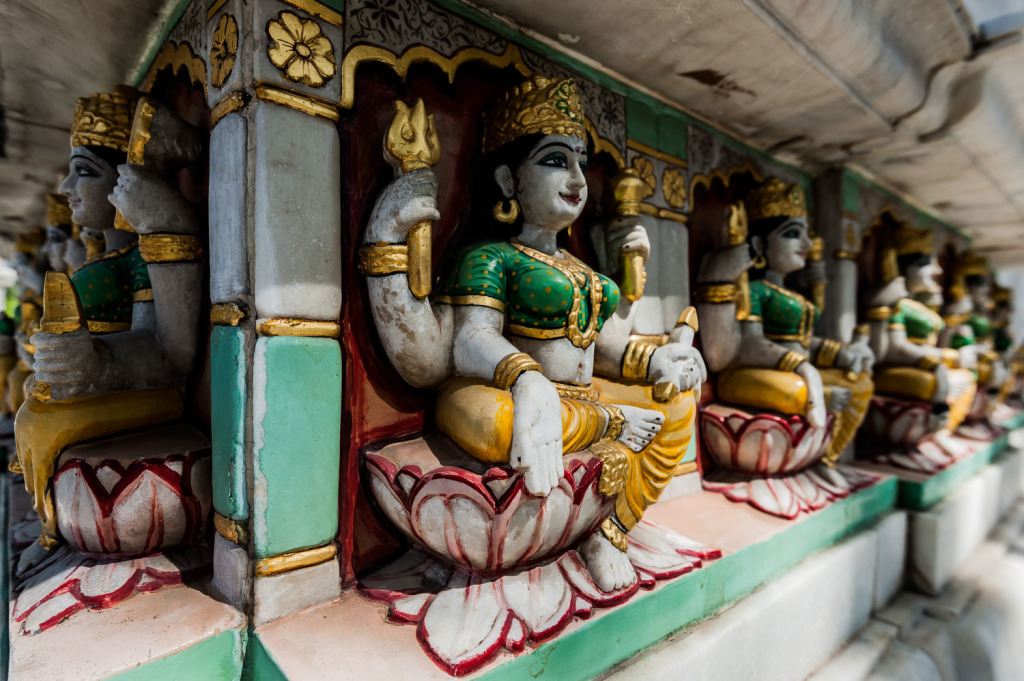 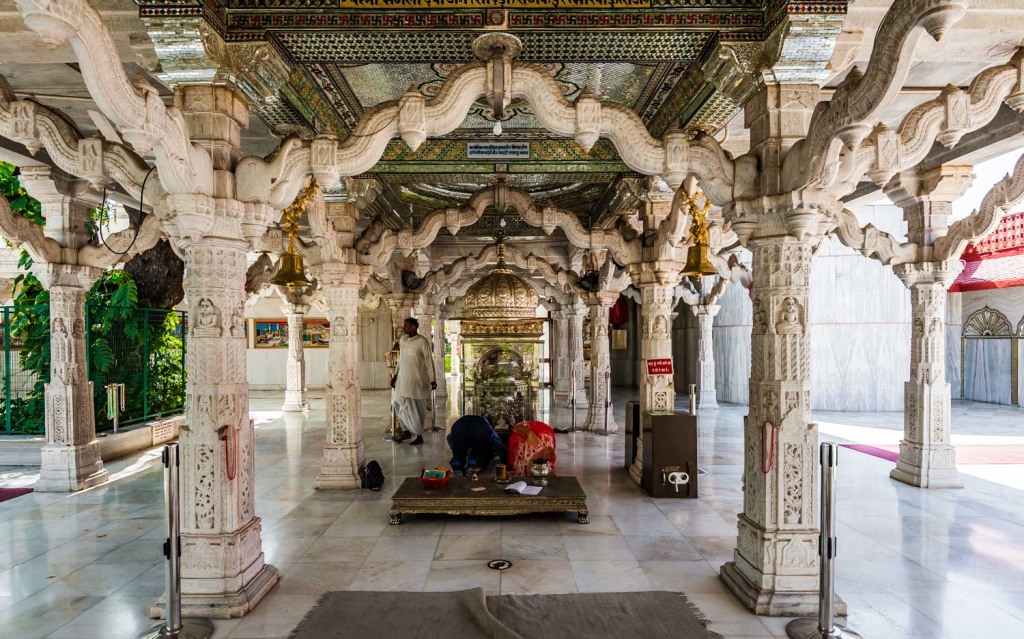 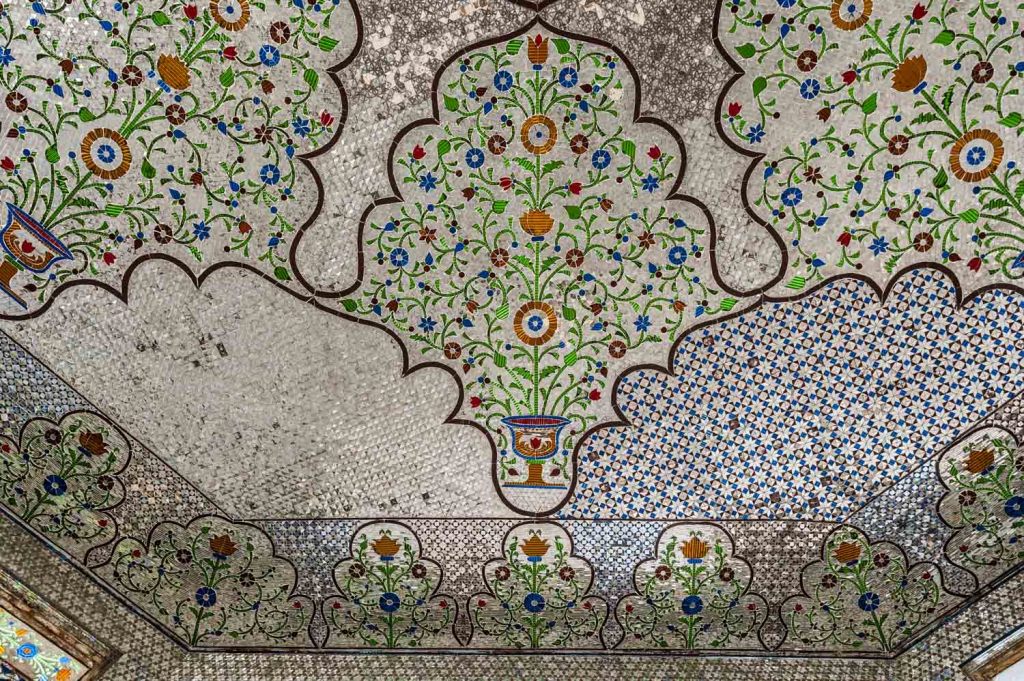 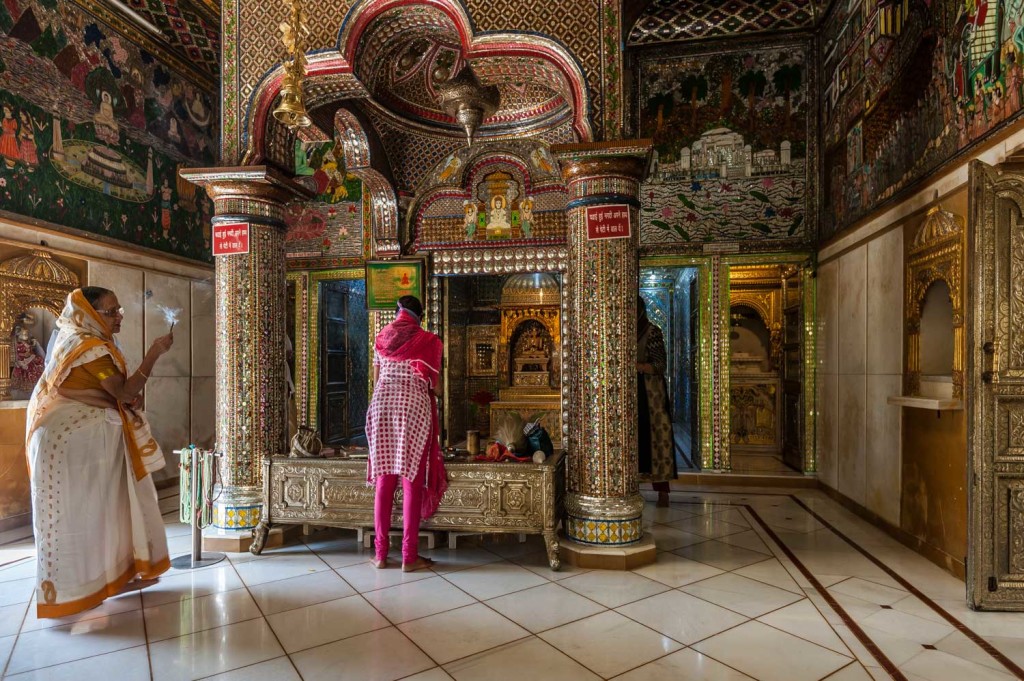 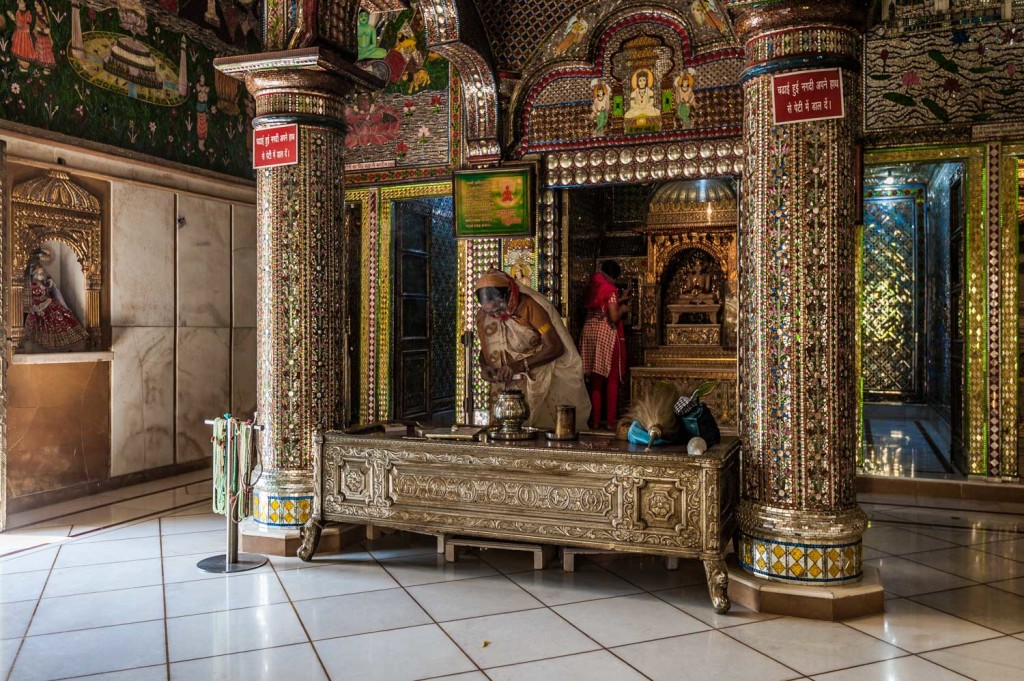 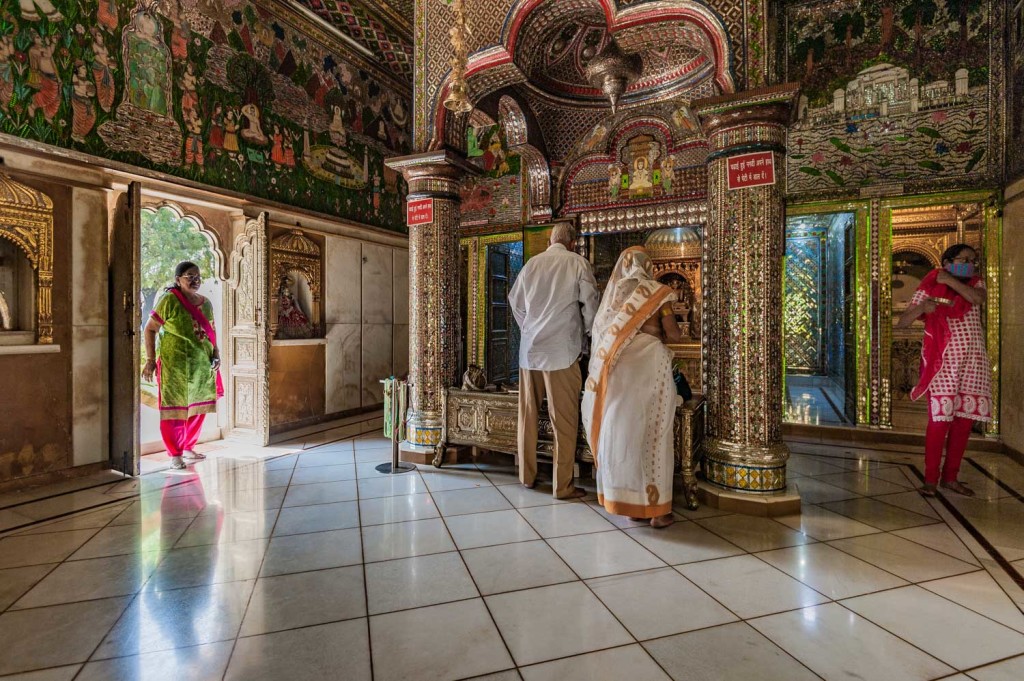 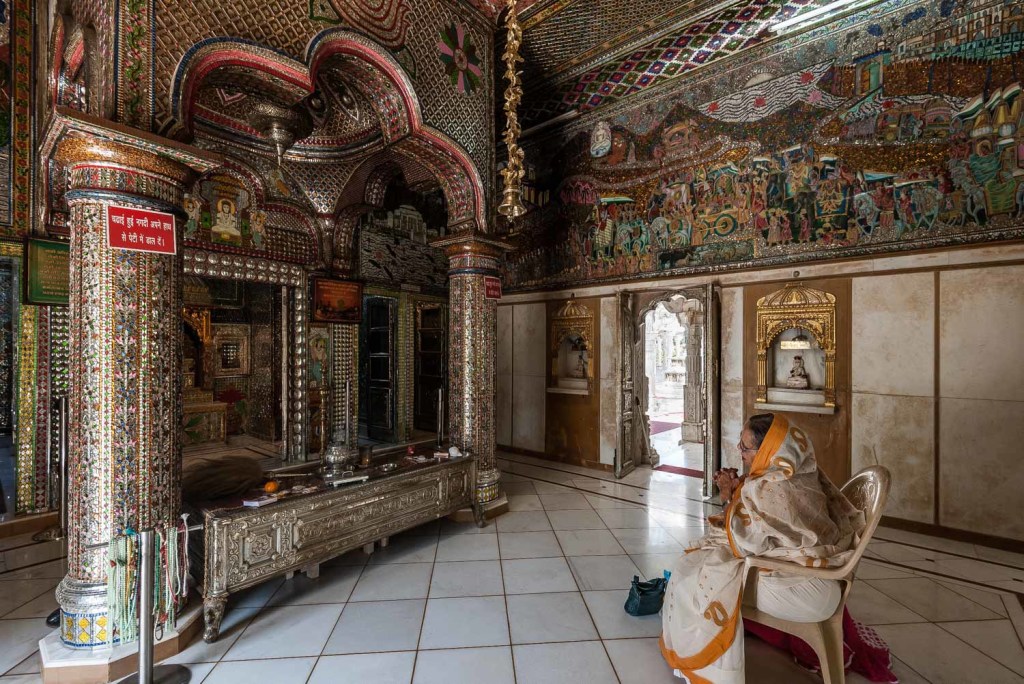 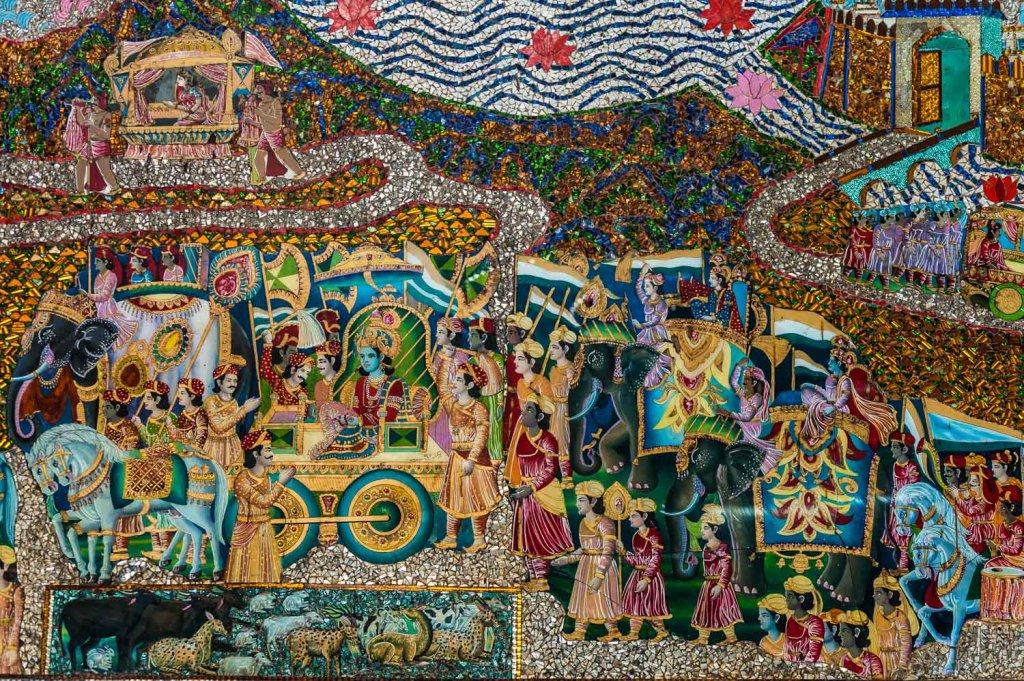 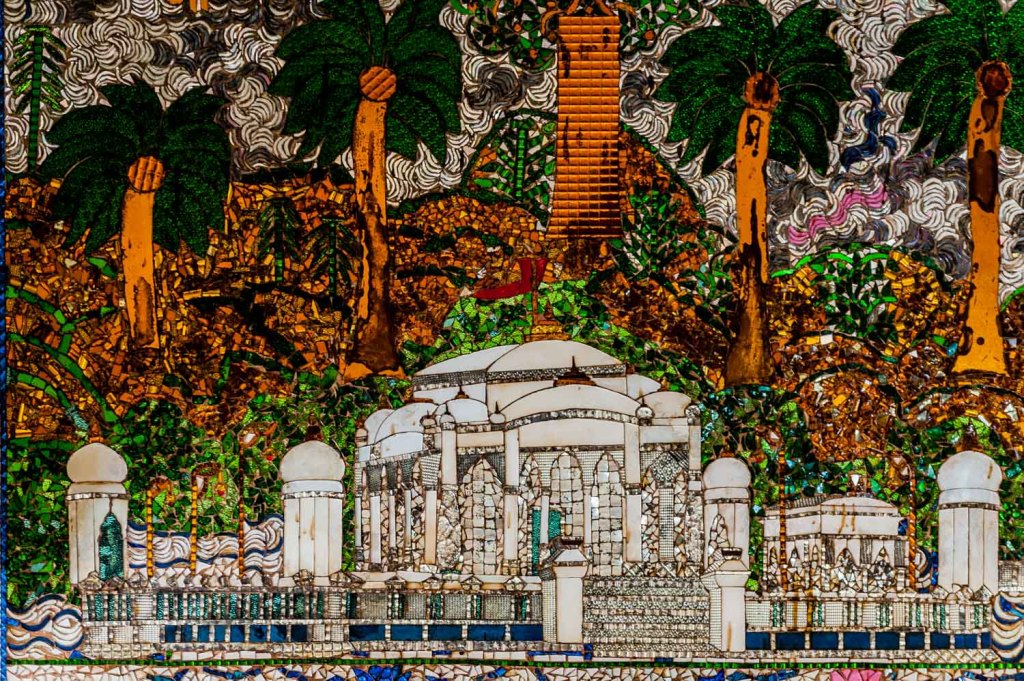 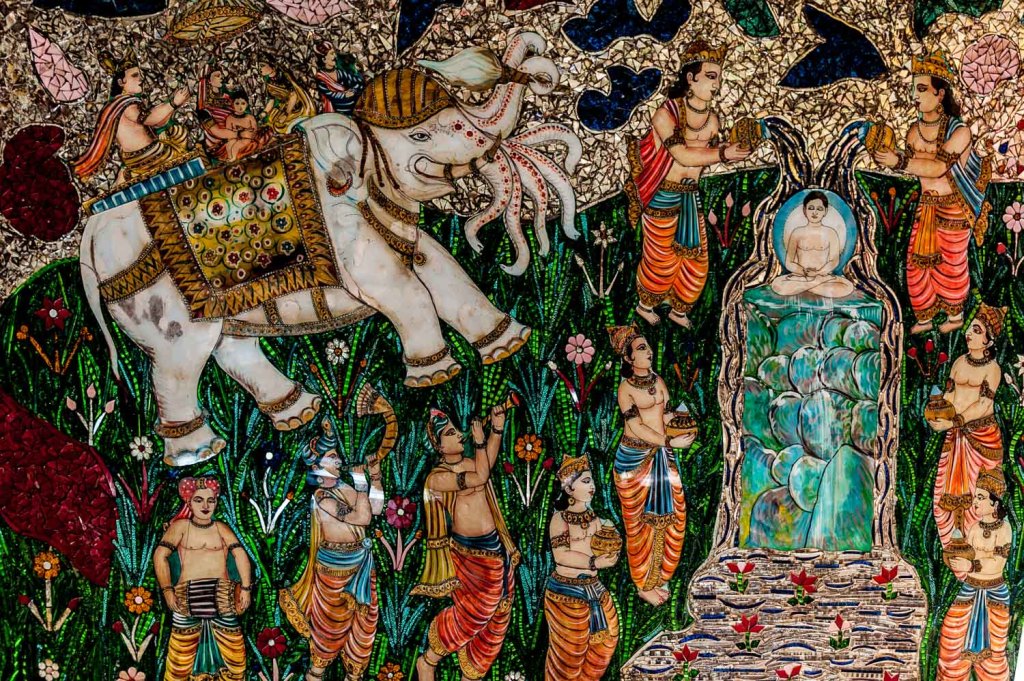 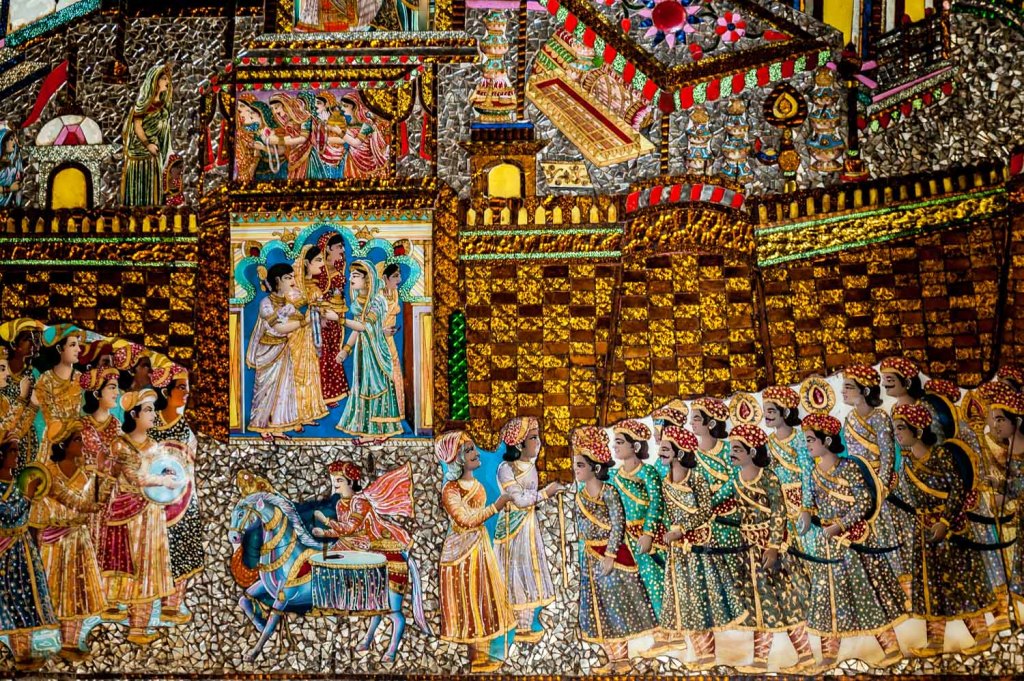 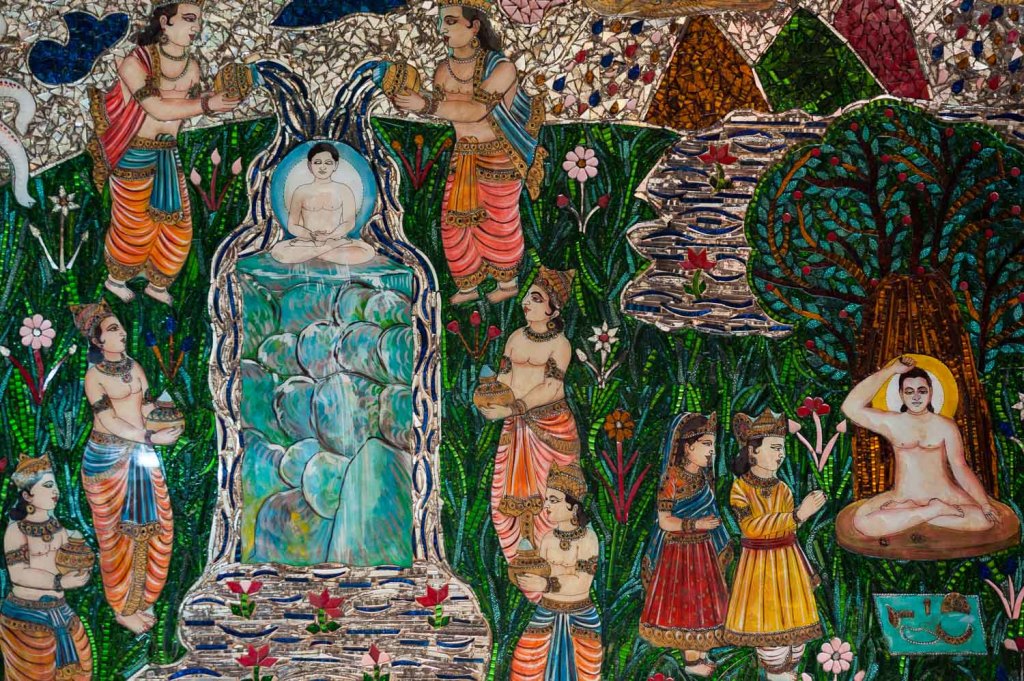 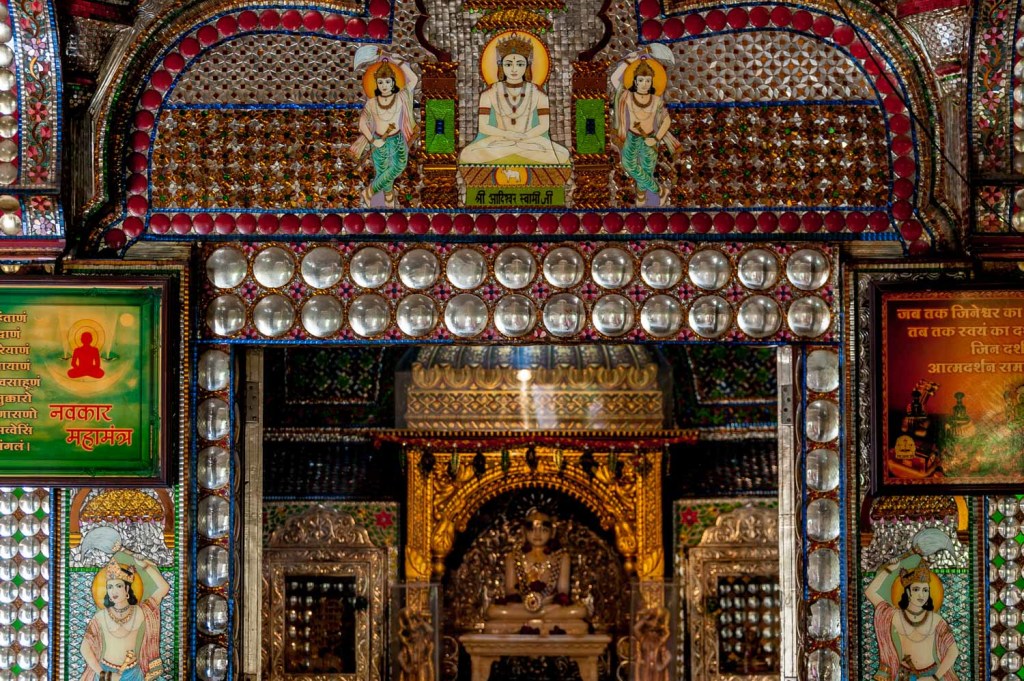 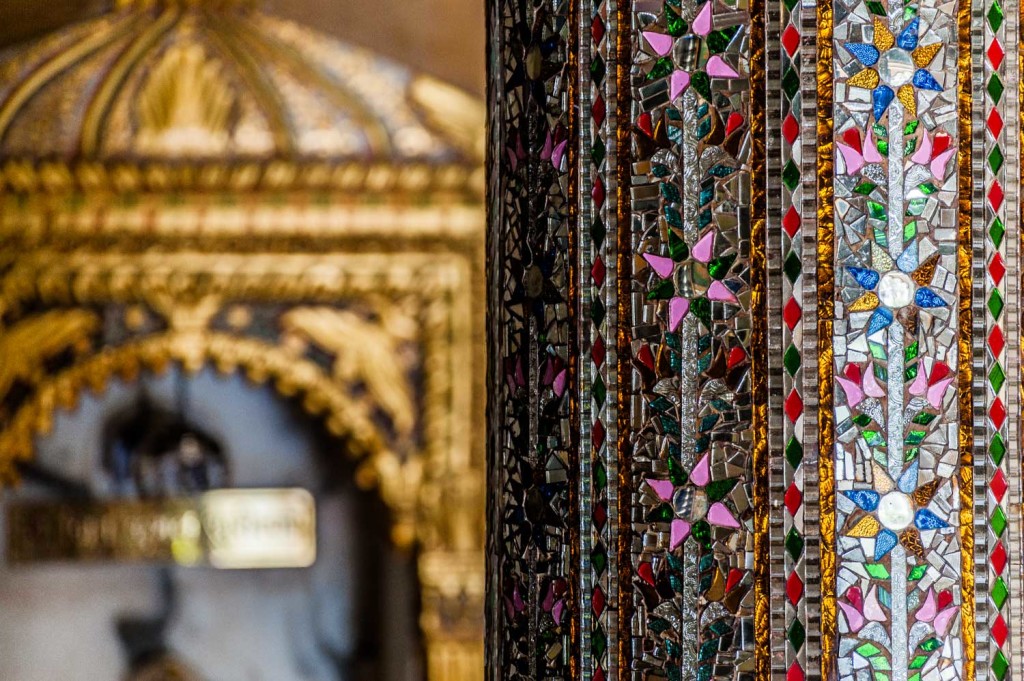 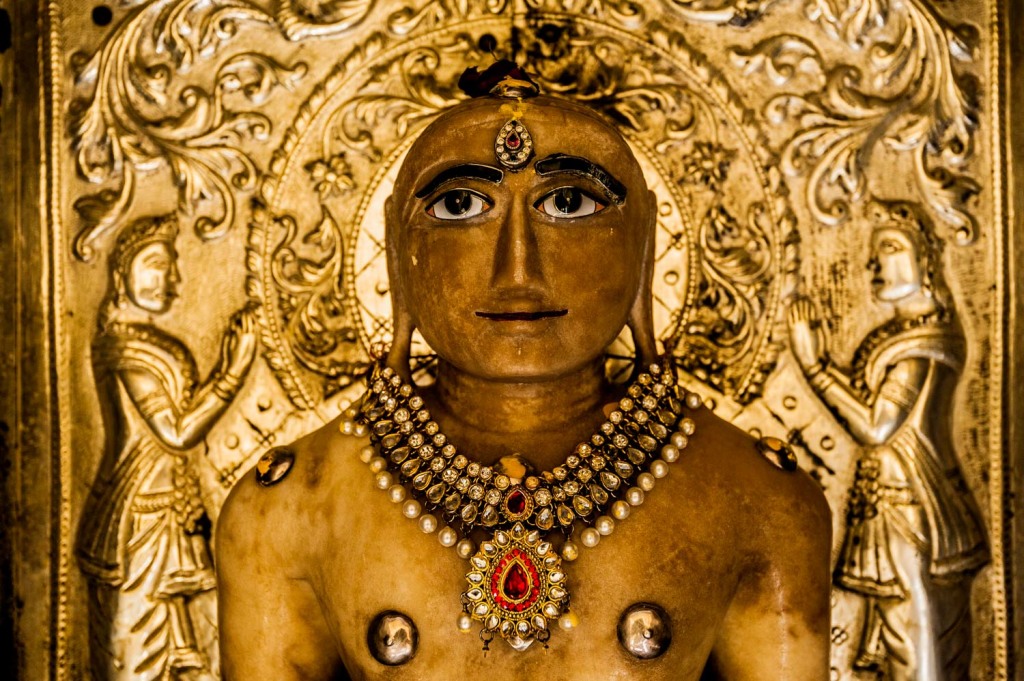