THE VISIT OF THE SAVOIA TO PARIS IN 1903 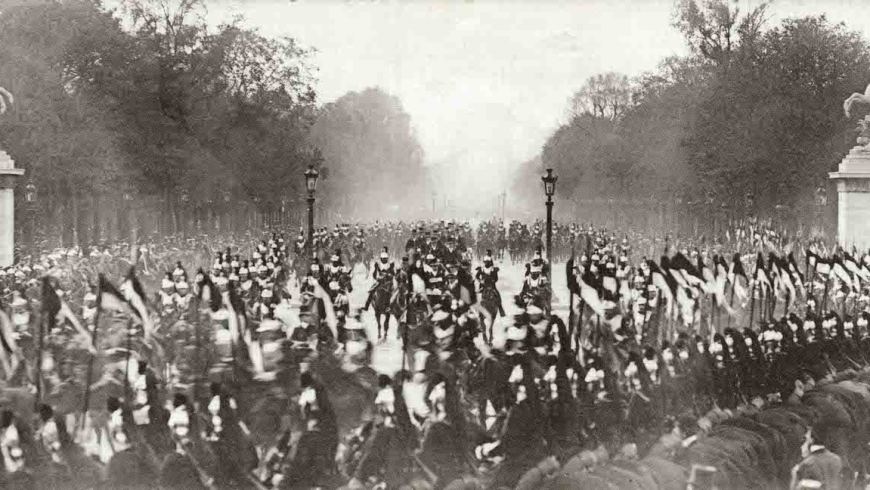 The beginning of the twentieth century were, for Italy, years of profound transformation. There was a new king, Vittorio Emanuele III, who was only a little more than thirty years old. A Queen Elena of Montenegro, also young and stylish. Politicians, like Zanardelli, Giolitti, Turati, who led the country into a period of reform and social conflicts. It was the beginning of the belle époque or, if we want to use more serious terms, a crucial moment in the modernization of Italy. On the international level, Italy was however weak, because its existence as a unitary state was recent. It was one of the contractors of the Triple Alliance with the German Empire and Austria-Hungary, a fragile pact between suspicious allies that had been each other’s enemies. On the other hand, Italy’s relations with Russia were bad: the Tsar had refused to visit Italy because of the criticism that many parliamentaries had made to his autocratic regime. There was a certain neutral indifference with England. And with France? With France, over the last thirty years of the nineteenth century, relations were bad, if not conflicting. Napoleon III had facilitated the unification with an Italian military alliance and the Savoia’s Piedmont but when, in 1870, France had been defeated and humiliated by the Kingdom of Prussia, Italy not only had helped its old ally, but had taken advantage of the situation and had conquered Papal Rome, whose defense was guaranteed by France. Three decades of antipathy and conflicts followed that culminated, in 1887, in a real trade war between the two countries. Then, in 1903, the two countries seek a reconciliation. Vittorio Emanuele III accepts the invitation of an official visit to Paris. Expectations are considerably high, but the path is difficult. For too long political rivalries had grown in both countries. For years they were accompanied by antipathy and contempt. Italian immigrants. who were selling contraband trinkets on the Champs Elysées were driven away and kicked out by the chauvinists waiters and in Aigues Mortes, in 1893, ten Italian workers were lynched because of the harsh competition in the labor market. Precisely for this reason, signs of reconciliation during the visit of the Savoia in Paris had to be visible, public, and shared. The Monarchs of Italy came to Paris for a long and busy visit. A week of meetings, talks, great symbolic events that must speak of a renewed friendship between the two countries. The visit is an extraordinary event, followed by newspapers from all around the world and observed glacially by the Chancellors of Vienna and Berlin. Probably the visit would have been profitable if, within in a decade, Italy would have changed allies once again and would have sided with France and England against Germany and Austria in the Great War.

We are in Paris. It’s Wednesday, October 14th, 1903. The clock of the Gare du Bois de Boulogne (now called Gare de l’Avenue Foch) marks ten to three. The celebrities and the military, on foot and on horseback, will have to wait forty minutes before the arrival of the Monarchs of Italy. The photographer records the scene from the Porte Dauphine. At 15:31 precisely the royal train enters the station. The music of the honors orchestra intones the National Anthem and soon after the Marseillaise. The French President Loubet and his consort advance towards the royal carriage . Vittorio Emanuele III and Queen Elena descend. First, the King gives President Loubet a long handshake, then embraces him warmly. Vittorio Emanuele III is wearing the high General’s Assembly uniform with the Annunziata collar and the Grand Cordon of the Legion of Honour, the President Loubet is in tails, the Queen dresses in grey with an ostrich boa; Ms. Loubet is in a crème coloured dress. The coaches depart for the Avenue du Bois de Boulogne under a continuous applause from the huge population. The canons thunder.

The King and Queen reside in the representative apartment of the Foreign Ministry at the Quai d’Orsay, of which the colonnade is visible in the background. The photographer captures the scene from a terrace of the Palais de Bourbon, the headquaters of the National Assembly. The procession crosses the Pont de la Concorde, accompanied by the President’s Guards, while the infantry of the Republican Guards are deployed along the entire route. The King goes to pay tribute to the Presidents of the Parliament and Senate and then goes the Elysée, for the gala dinner hosted by the President of the French Republic: all the guests with high military degrees dress in uniform; the others, in black tie. The toasts are challenging and rhetorical proclamations of friendship, recognition of fraternal ties between the two countries, the warmth and enthusiasm of the meetings is moving. At the toast of President Loubet, the orchestra intones the Royal Anthem for the King of Italy, and then the Marseillaise. After dinner, a short concert: the Intermezzo of the Cavalleria Rusticana and then some actresses and actors from the Comédie Française recite poems in Italian and French.

Every move of the sovereign is grand. Here we are on the Champs Elysées and the photographer is on scaffolding in the Place de la Concorde, behind a row of Dragoons. How the King and Queen moved around for their shopping and their visits in Paris, it is hard to say. In the streets that they cross, the traffic is blocked, the crowd rushes and the lines of the monarch’s landeaux and their entourage are long. The Queen visited an old governess and bought gifts for the princesses, Mafalda and Jolanda, in Rue de Rivoli and the Faubourg Saint Honoré: linen and toys. The King went hunting in the Rambouillet Castle with President Loubet. It was raining, but the King didn’t mind hunting in the rain: pointing the rifle quickly and accurately. There are pheasants, hares, rabbits, deer: all coaxed towards the hunters by an army of gamekeepers. The King killed one hundred and thirty head of game, of which eighty-nine were pheasants.

The preparations and decorations in Rue de l’Opéra are at the finishing touches. Seen from the Place de l’Opéra, the road appears decked with Italian and French flags with two columns supporting the Savoia crest. On the columns, the Wolf of Rome and the Lion of Venice. This symbol was chosen by the French authorities instead of others in order to emphasize the passage of Venetia to Italy after the war in 1866, which took place through the mediation of France. At the Opéra, a jubilation of Verdi and Mascagni, Saint Saens and Massenet, Leoncavallo and Berlioz but also songs from recent works: La Bohème by Puccini, which was performed for the first time in Paris in 1896. The official lunches and dinners – not less than ten courses – take place in the grand halls decorated pompously at the Elysée, the Chateau de Versailles, the Italian Embassy: there are the diplomatic corps, ministers, aides and secretaries of the King and the President with their ladies. Abbundant oysters, and rivers of champagne, and rich Burgundy red wine to accompany the game. The cakes are light: fruit with cream, ice cream, sorbets.

Sunday, October 18th the sovereigns conclude their visit. They are tired after a week of dense commitments, but moved by the warm welcome they had received. They set off for to the Gare des Invalides at three in the afternoon. The King, with President Loubet, is in a four horse Daumont carriage. The horse’s manes are braided with ribbons of the Italian colors. The same for each of the other carriages that follow. At 15:45 the train is moving off slowly. The King and Queen look out from their salon carriage which is enriched with mirrors and fresh flowers and are acclaimed by the crowd. The Queen wears an antique pink dress and a light fur collar. The King is in field uniform. The trip will take, like the one to Paris, a long and arduous twenty-four hours to reach San Rossore. The French commitment ends and the Italian one begins: Zanardelli is dying. There will soon be a new prime minister, Giovanni Giolitti, who will benefit from the trip to Paris. The Giolitti era begins.