PIER LEONE GHEZZI'S PAINTINGS IN THE VILLA FALCONIERI IN FRASCATI

photographs and words by Massimo Pacifico 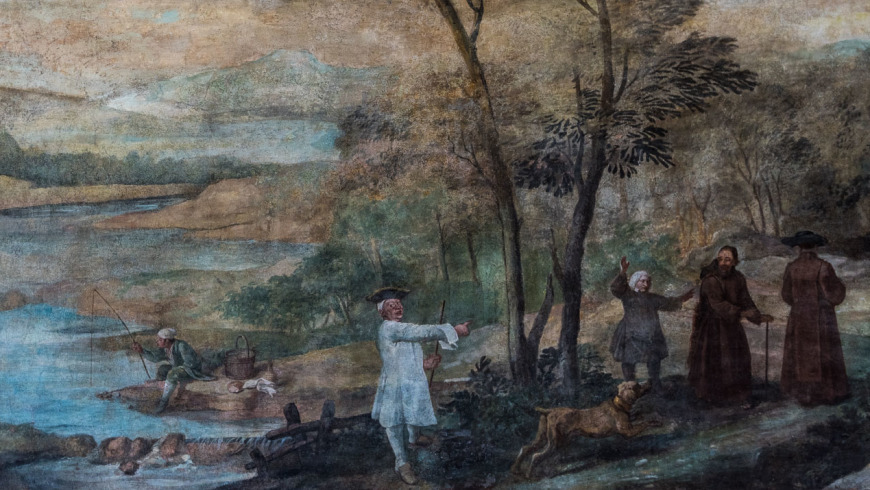 How did the papal nobility of the beginning of the 1700s live in the villa during the beautiful season? Pier Leone Ghezzi tells of it, with an engaging style, in his cycle of frescoes for the ground floor of the villa Falconieri in Frascati.

Ghezzi (1674 – 1755) was born in Rome, in via Giulia, son of Giuseppe and Lucia Laraschi. His father, originally from Ascolano, a painter of fame and well-introduced in society that counted, addressed him soon to academic painting. And the talent of the young man did not fail to be revealed. At his almost instantaneous success, however, the goodwill of Clement XI, Giovanni Francesco Albani, himself from Urbino, was a great contribute. Pier Leone, who became an academician of S. Luca already in 1705, received important public affairs: the first important commission in 1712 was the Chapel of the Albani in S. Sebastiano outside the Walls. This was followed by six great celebratory paintings of the occupations of Clement XI. And again, between 1715 and 1718, the painter participated as the first actor to two important ventures, the decoration of the naves of the basilicas of S. Clemente and S. Giovanni in Lateran. To sacred painting, Ghezzi alternated the practice of the profane one, realizing many portraits of the curia and laical characters. He did not despise caricature, as evidenced by some frescoes in Villa Falconieri and, above all, by the eight volumes of drawings, ordered in Mondo Nuovo: well over fifteen hundred portraits, with the author’s notes on the characters caught by his pen’s nib, that, bound, are preserved today in the Apostolic Library of the Vatican. In 1721, Pope Albani died, but also his successors, Vincenzo Maria Orsini, Benedict XIII, and Michelangelo Conti, Innocenzo XIII, did not hesitate to assign projects to Ghezzi who skillfully split between commissions for churches and basilicas and the well-paid assignments of the aristocrats and rich bourgeois.

The decoration of the Frascati villa by Alessandro Falconieri, president of the Camera Apostolica since 1697, Governor of Rome from 1717 and Cardinal from 1724, dates back to 1727. Ghezzi portrayed him, with family and friends, in life size and in miniature. On the backdrop of open skies, or embedded in detailed architectural perspectives (entrusted to the hand of Domenico Villani, a topic specialist) with a great technique and views that could be defined photographic. The action narrated in Frascati involves the spectator who feels right in the scene as if witnessing, in the act of what is happening. The faces of the characters are defined in a precise manner, and the irregularities of the features detected without forcing.

The frescoes, on the whole, give a hyperrealistic view of costumes and habits. The ladies, dressed in fresh embroidered robes, are adorned with simple pearls around their necks or wrists, strolling with a fan in their hand to defeat the heat of summer; while the gentlemen, in velvet jackets, enriched by elaborate trims and eyelets, in wigs and tricorns, exchange confidences or tobacco. In the background, the rumbling of silks and canvases and the singing of birds can be felt. He illustrates the fashion of the beautiful Roman and international world that he spent time with and animated with the Academia della Musica that would meet in his home. Also, the visit of Abbot Placido Eustachio Ghezzi is documented, the younger brother of the painter, not forgetting the close ties of Falconieri with the ecclesiastical environment.

Ghezzi does not stop even in front of a self-portrait, in a bluette jacket and vermilion stockings, which shows him at work. He is leaning on a balustrade on which the inscription “Ghezzius hic faciem gestus se pinxit et artem; Sed magnum ingenium pingere non potuit. MDCCXXVII ” is written. In short, “Ghezzi here portays his face and his art. However he was not able to portray his great genius. 1727 “! The wit and verve that appear evident in these images that playfully describe the daily life of the gentlemen, farmers and peasants who animated the Colli Albani of the era. 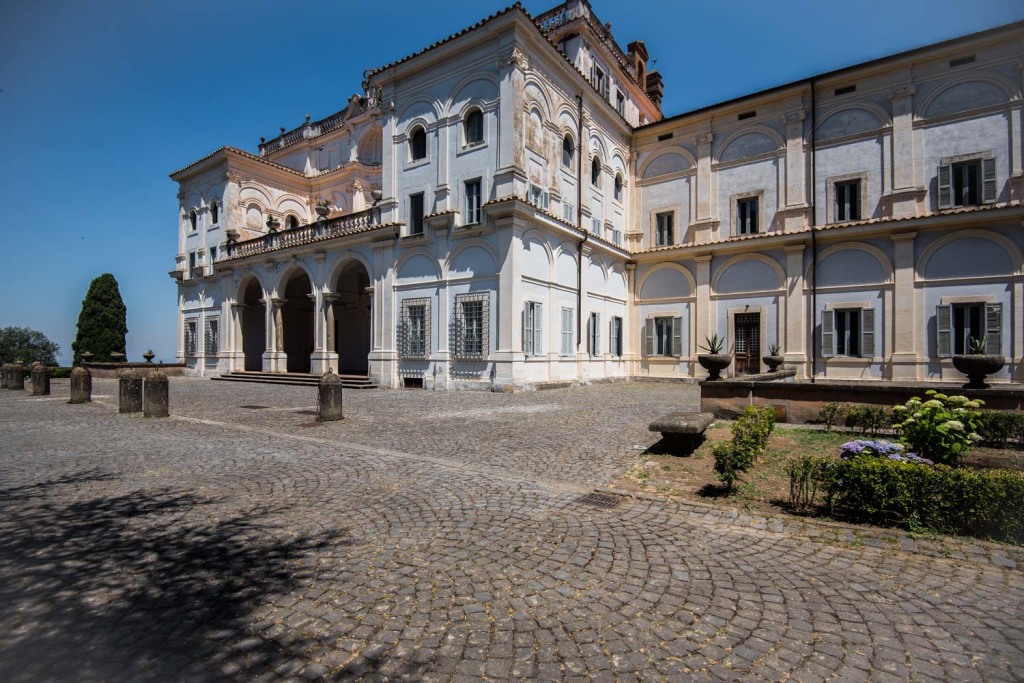 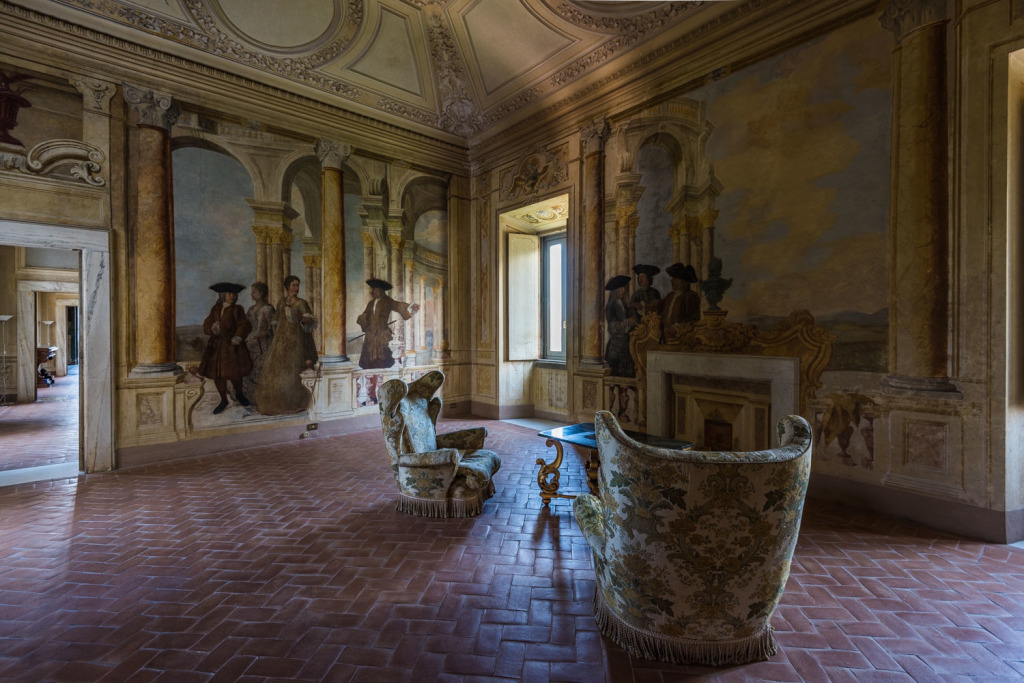 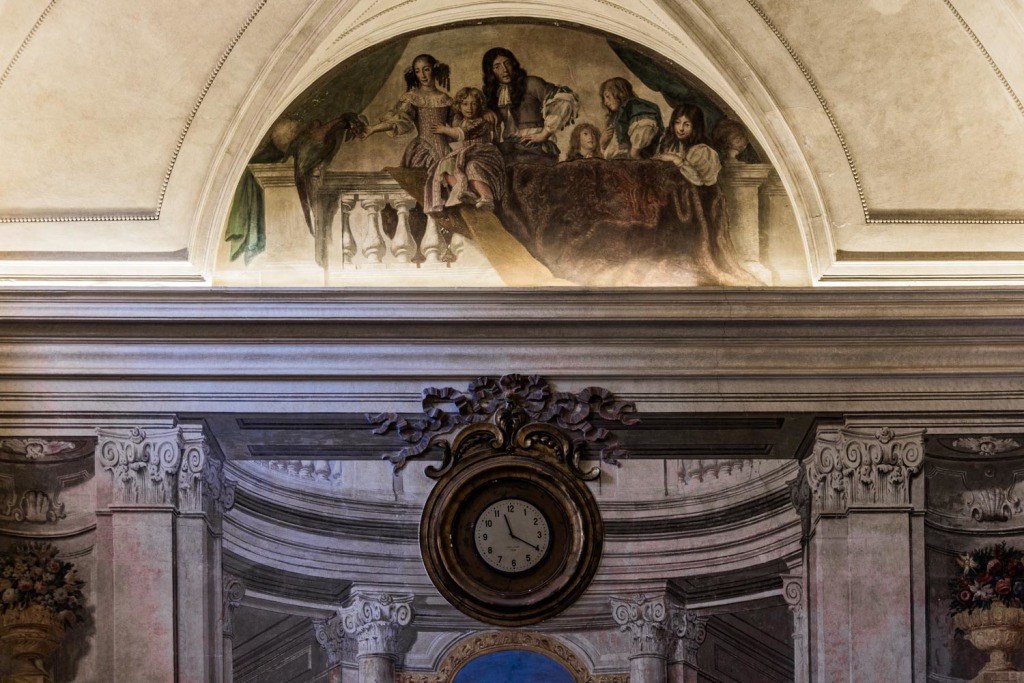 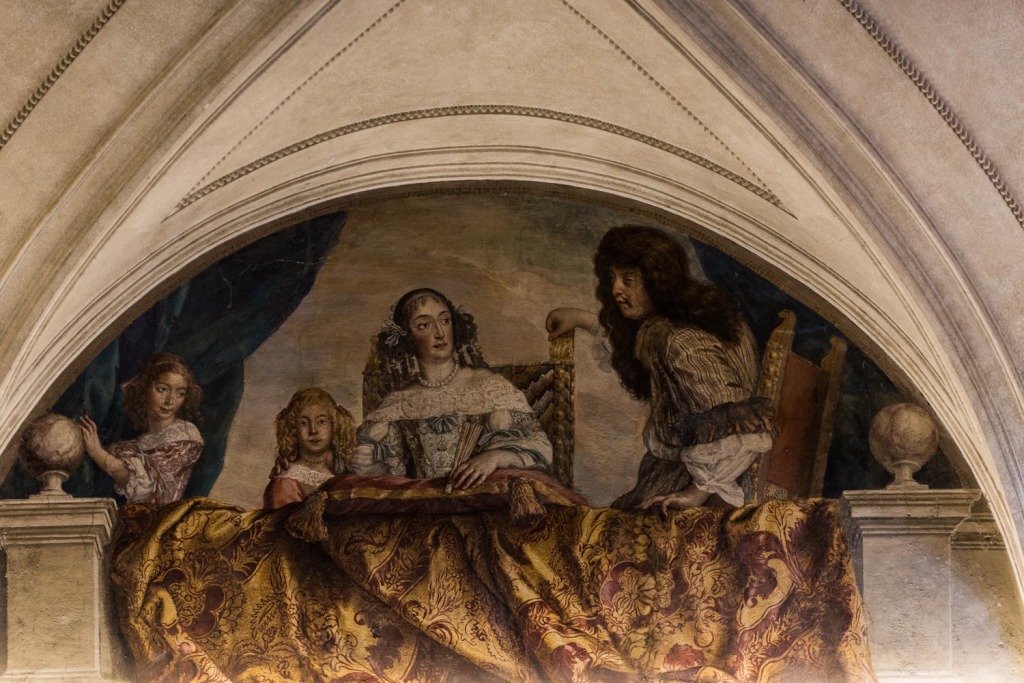 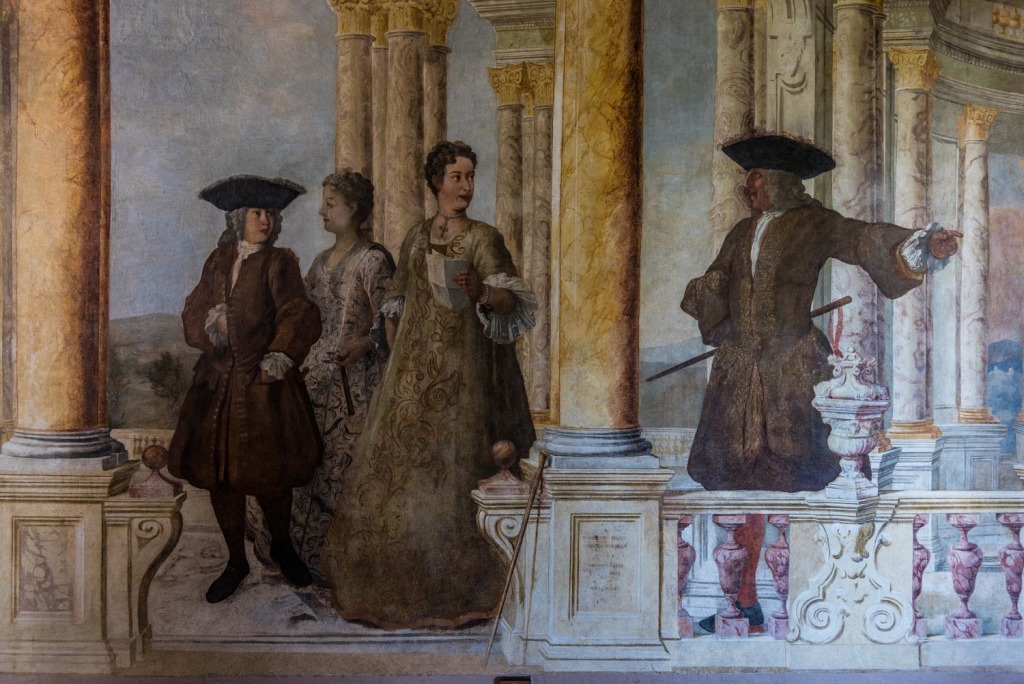 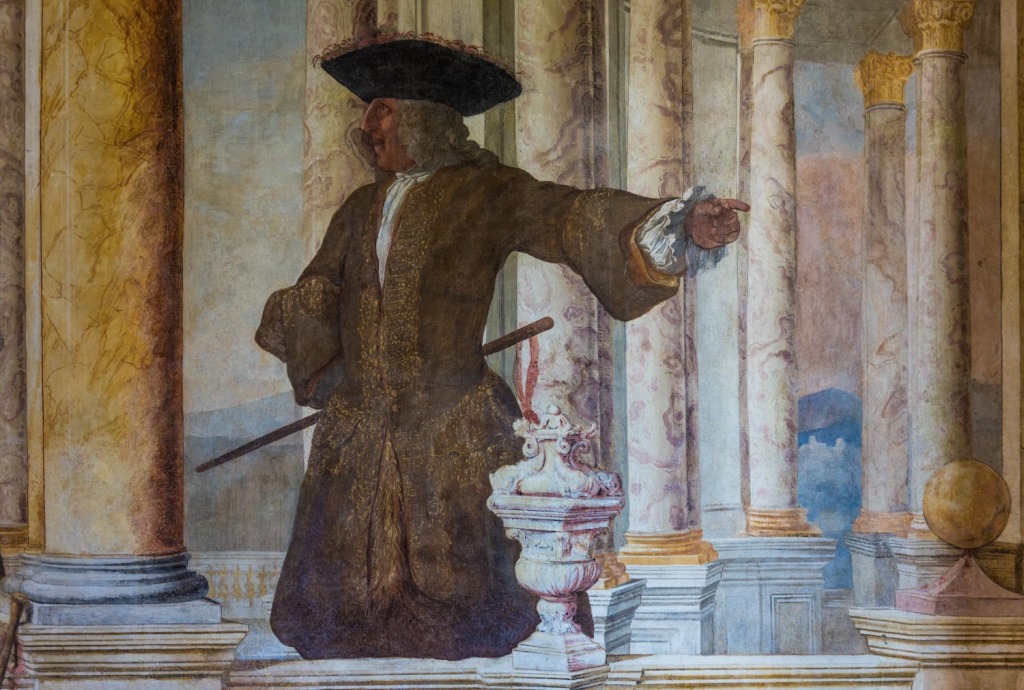 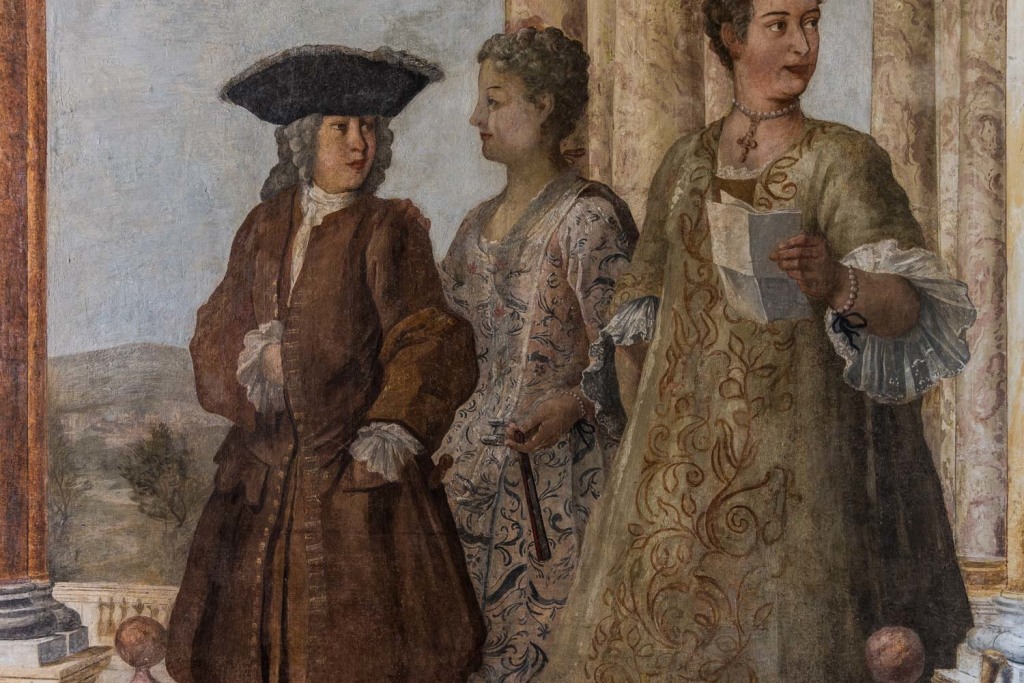 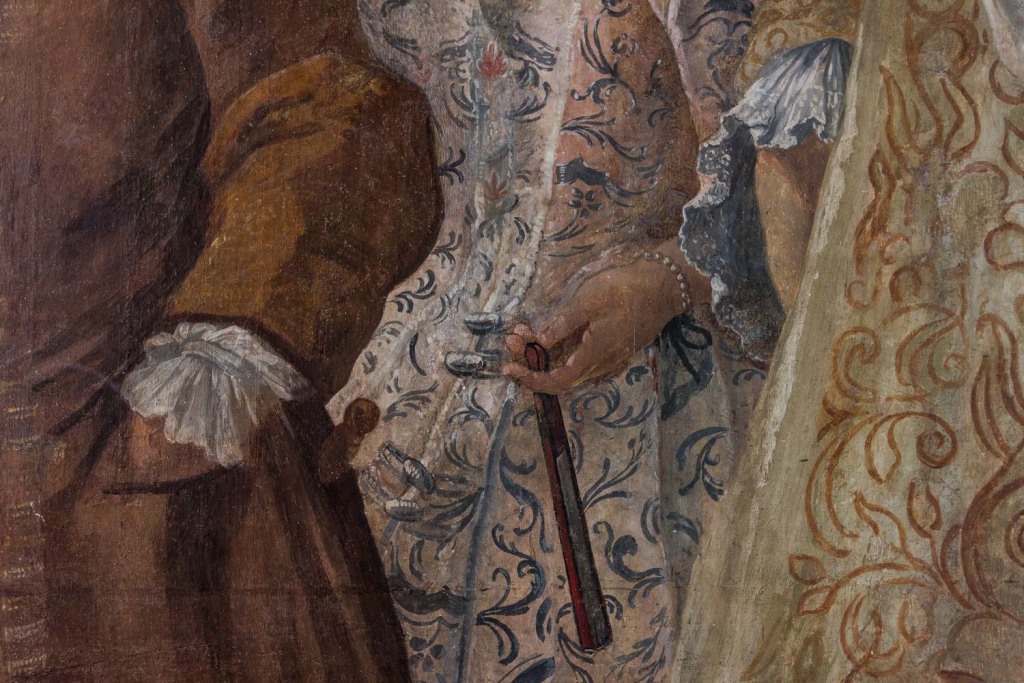 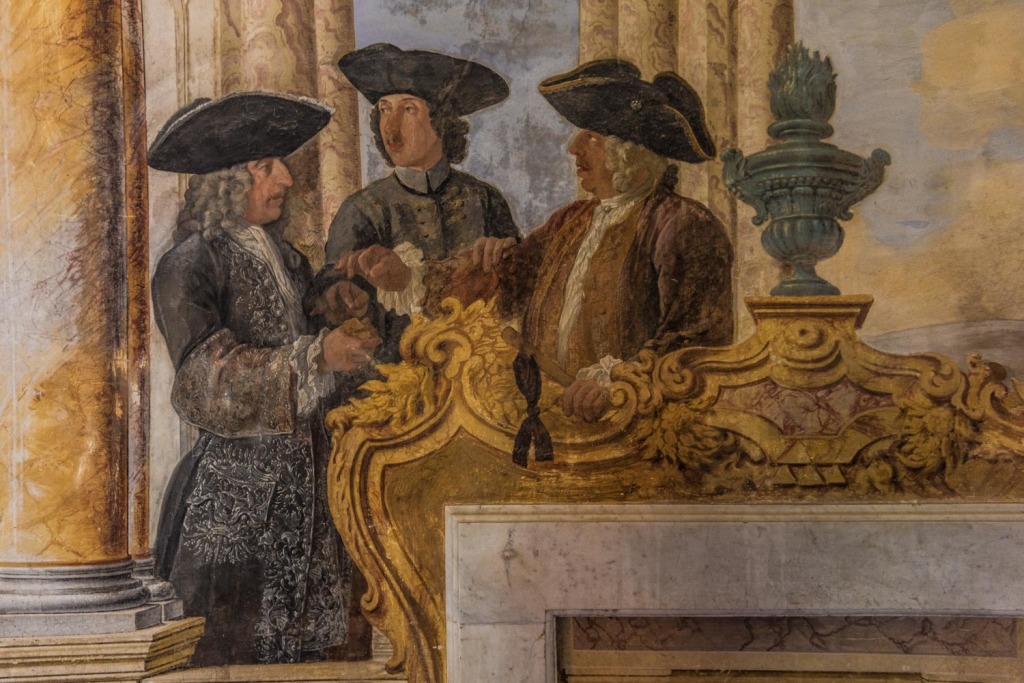 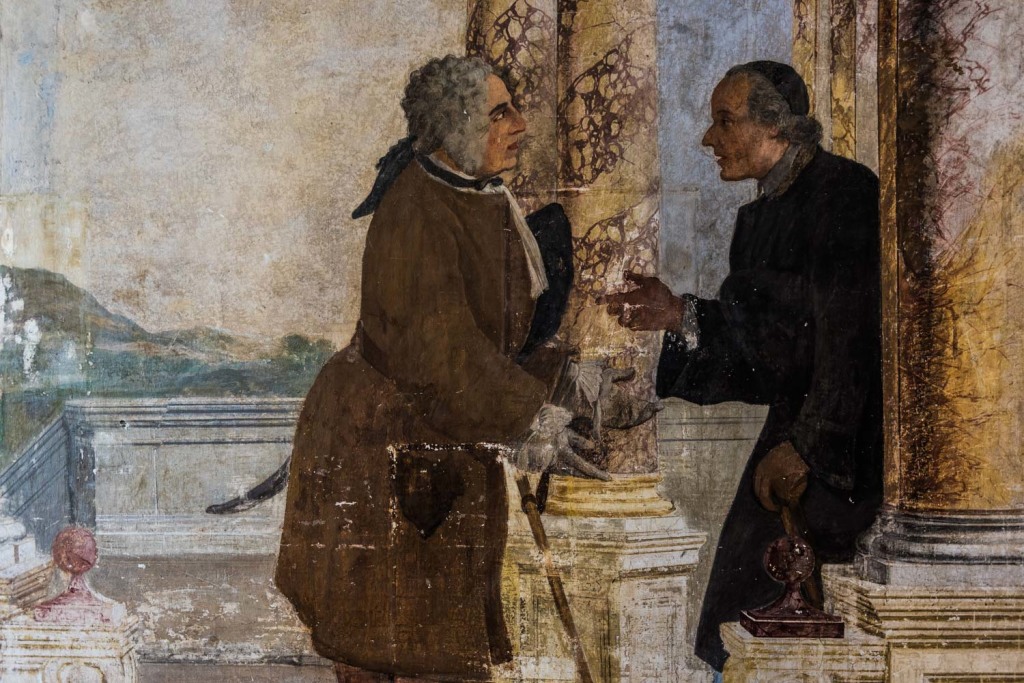 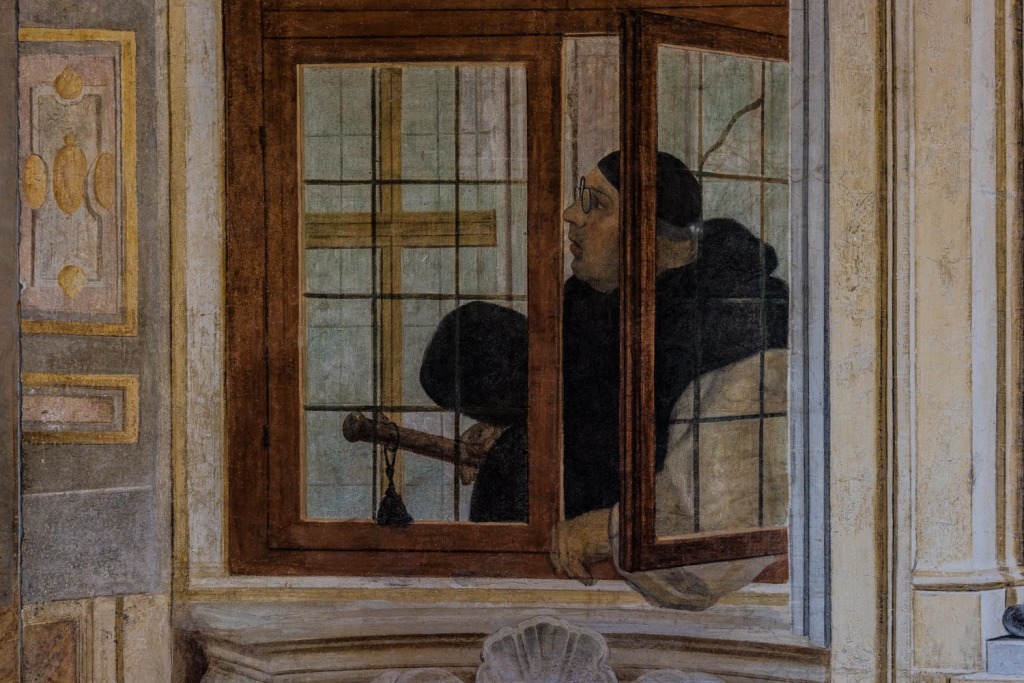 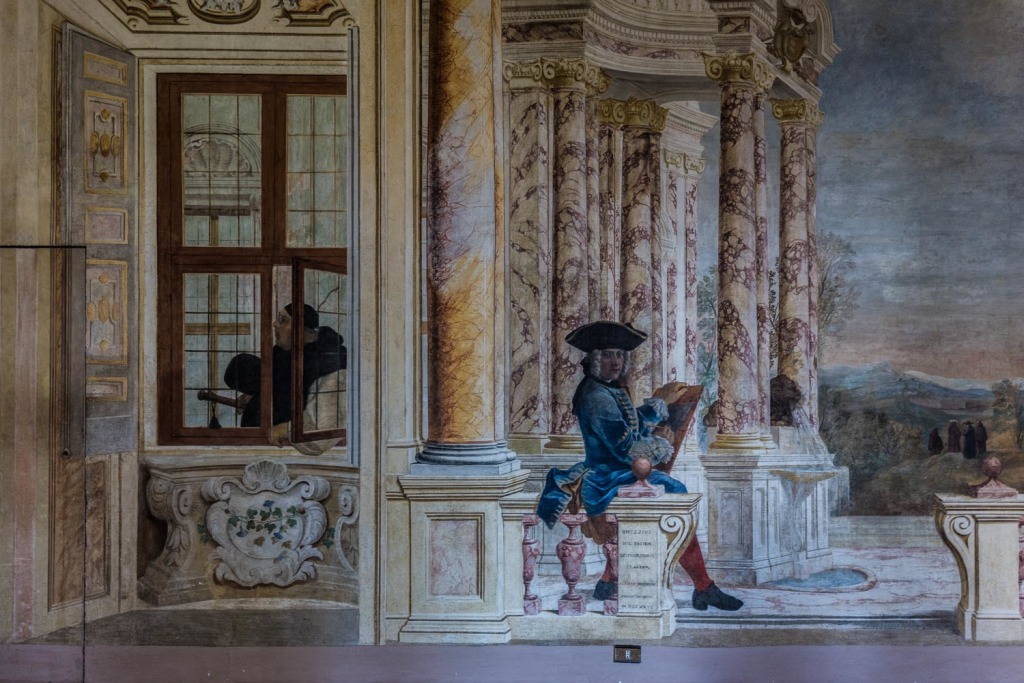 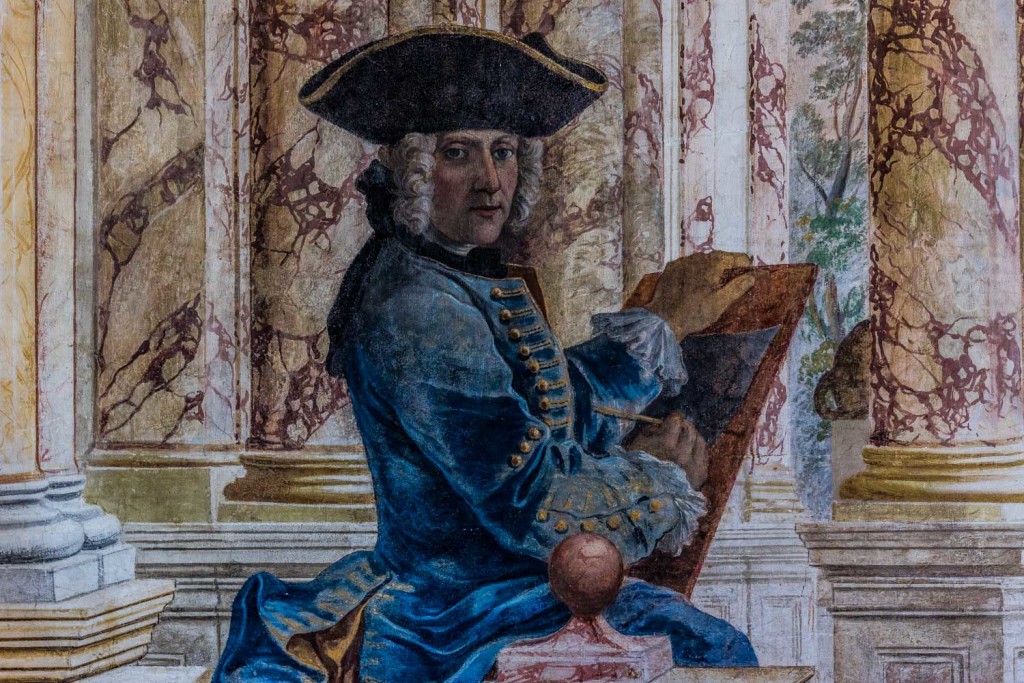 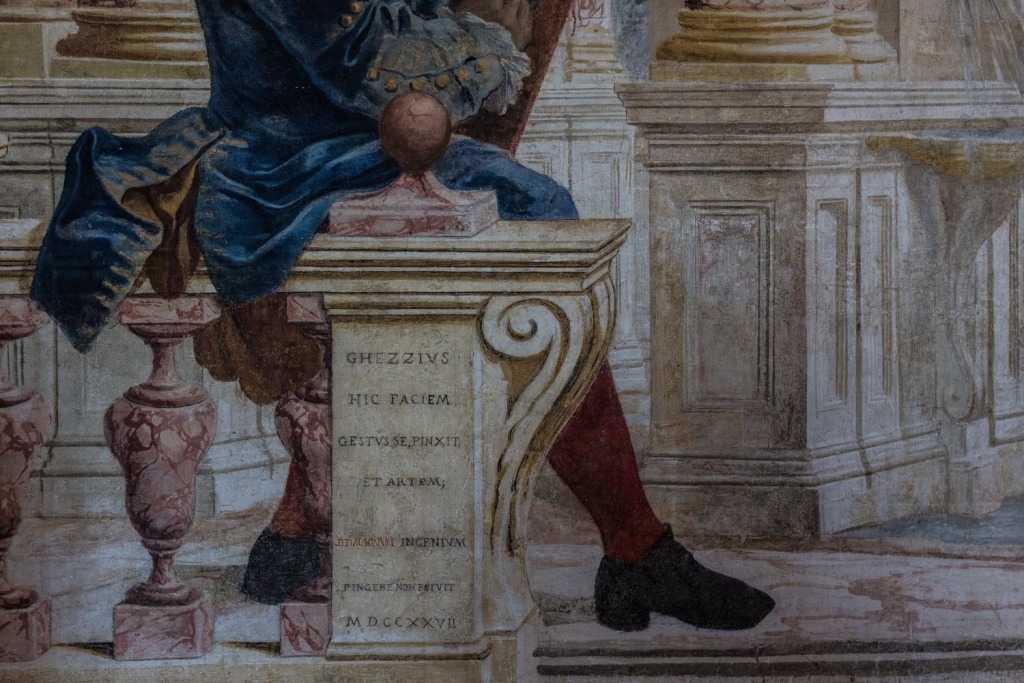 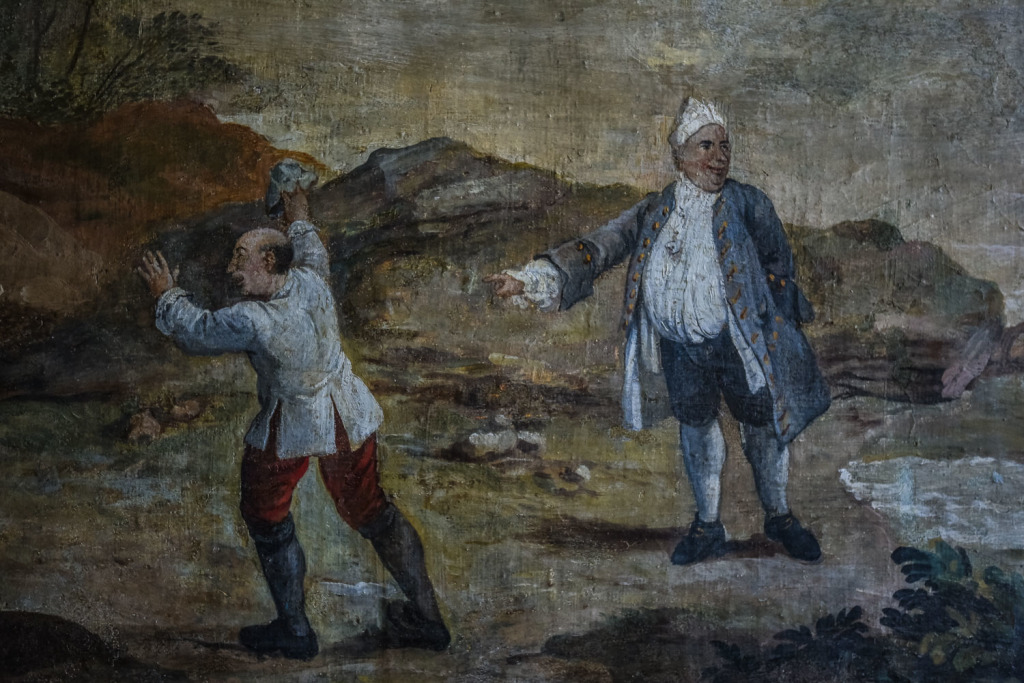 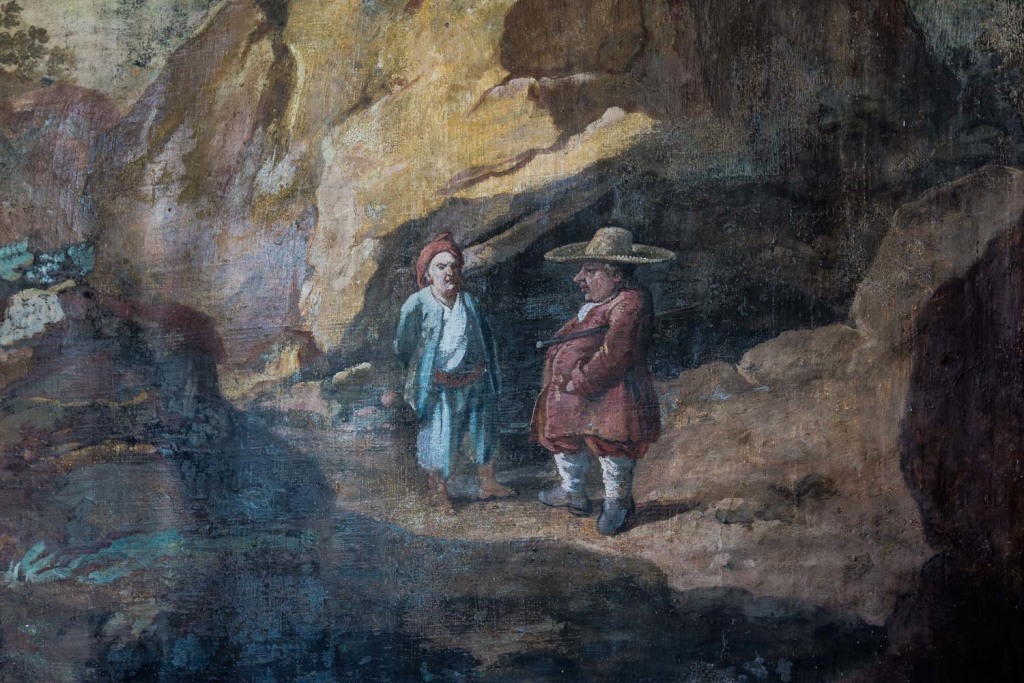 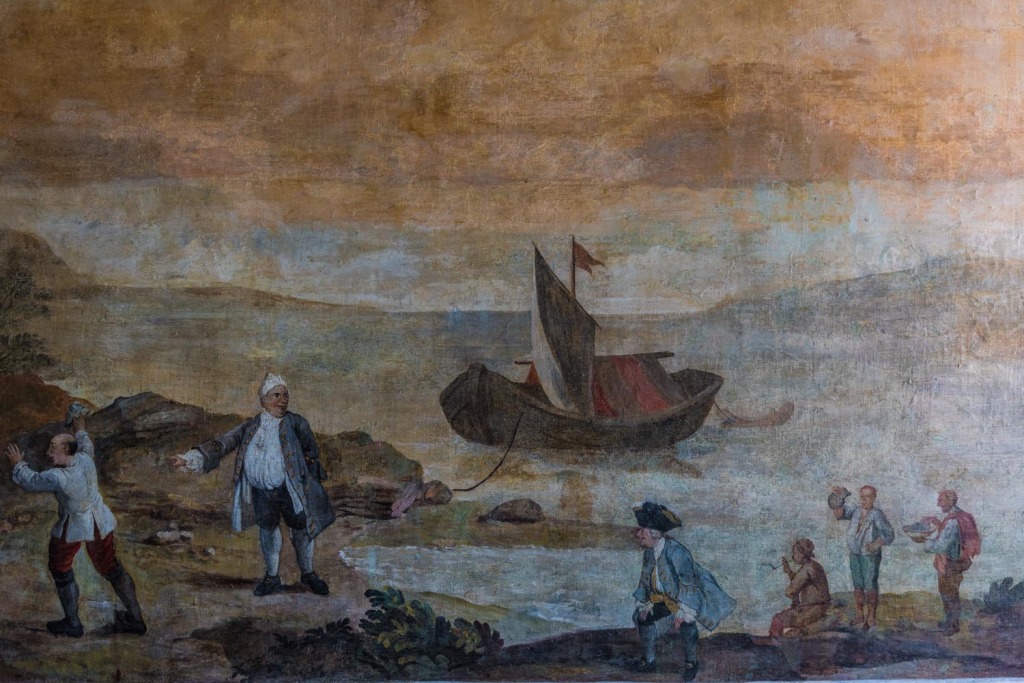 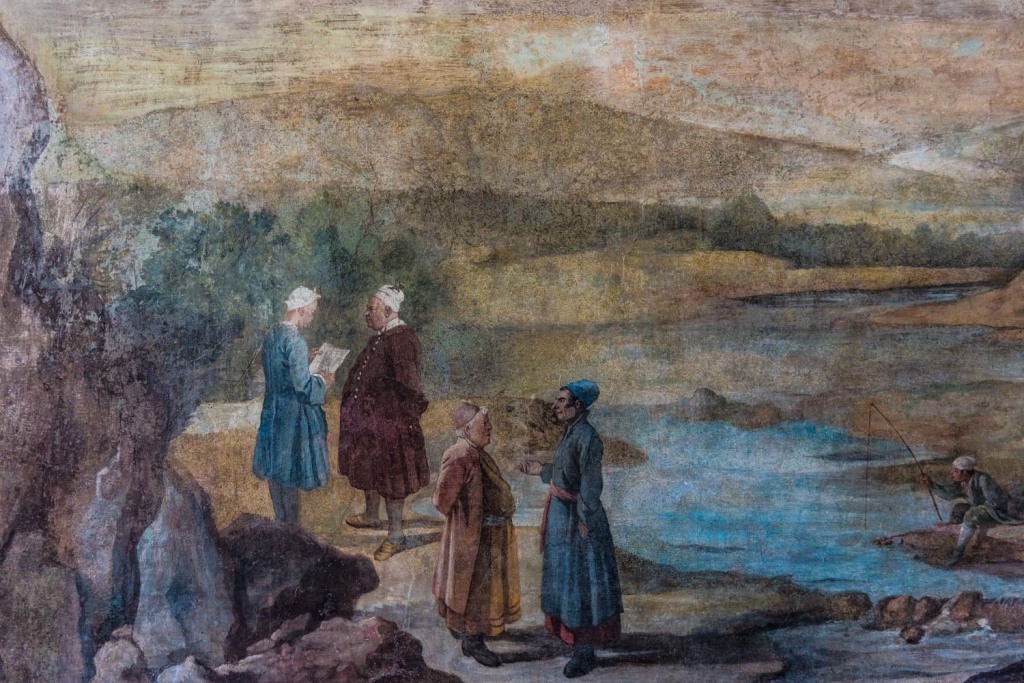 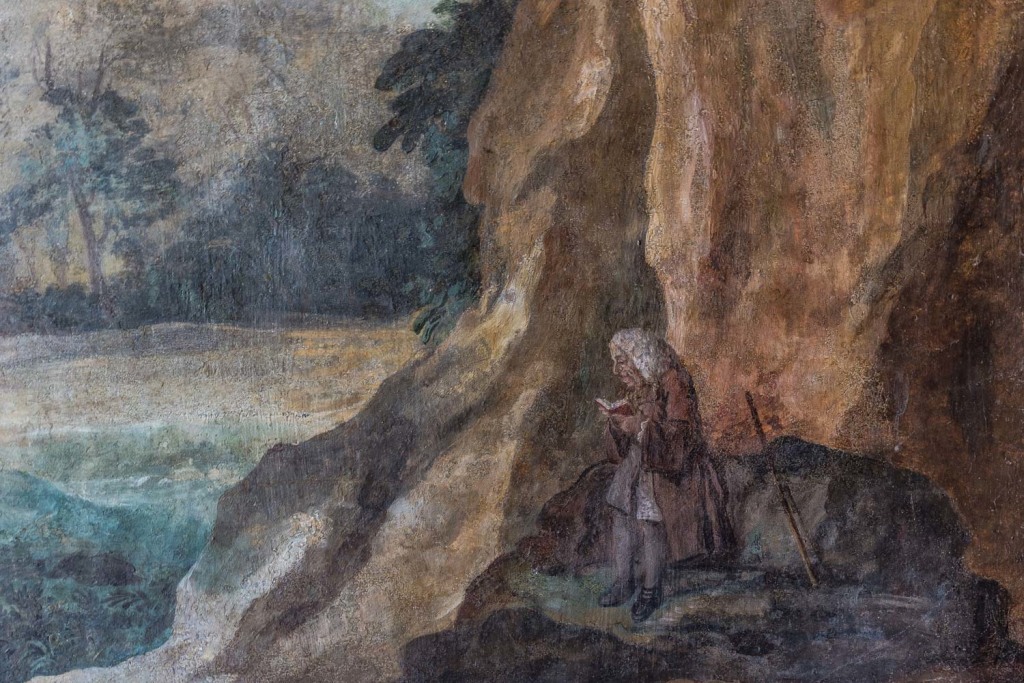