THE NEW SACRISTY OF THE MEDICI CHAPELS IN FLORENCE

photography by Massimo Pacifico
words as in the captions made for the visitors of the Medici Chapels (…with a few corrections for Barnum readers!) 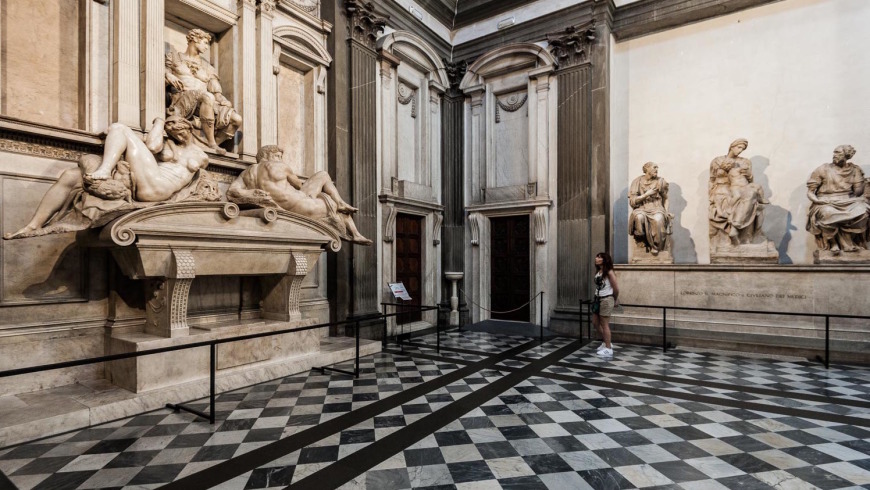 The New Sacristy was built by order of Pope Leo X to house the mortal remains of his brother Giuliano, Duke of Nemours, and his nephew, Lorenzo, Duke of Urbino. The undertaking was completed by Pope Clement VII. In 1520, the task was entrusted to Michelangelo who worked on it until he definitively moved to Rome in 1534.

By order of Cosimo I, between 1555 and 1559, Giorgio Vasari and Bernardo Buontalenti gave the Sacristy its present aspect with the mortal remains of Lorenzo the Magnificent, father of Leo X, and his uncle Giuliano.

The architectural structure is of dimensions analogous to Brunelleschi’s Old Sacristy, and is characterised by an innovative concept of space. Of classial ispiration is the cupola with its coffered vault, reminiscent of the Pantheon.

TOMB OF GIULIANO, DUKE OF NAMOURS

Brother of Pope Leo X, the Duke of Nemours (1478 – 1516), was portrayed by Michelangelo as a military captain holding a staff of command. On the volutes of the sarcophagus lie the reclining statue of Day (right) and Night (left), which recall the persistent passing of time. Day is portrayed as a powerfully-built man with an unfinished face. Night is a young, sleeping woman with a smooth, sleek body, drenched in lunar night. 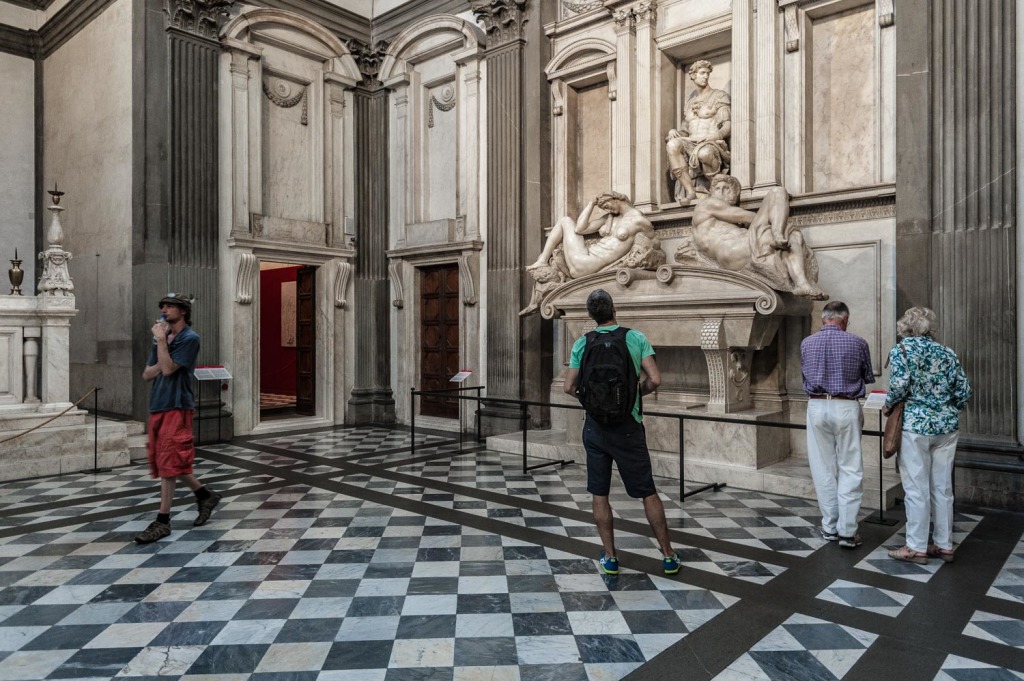 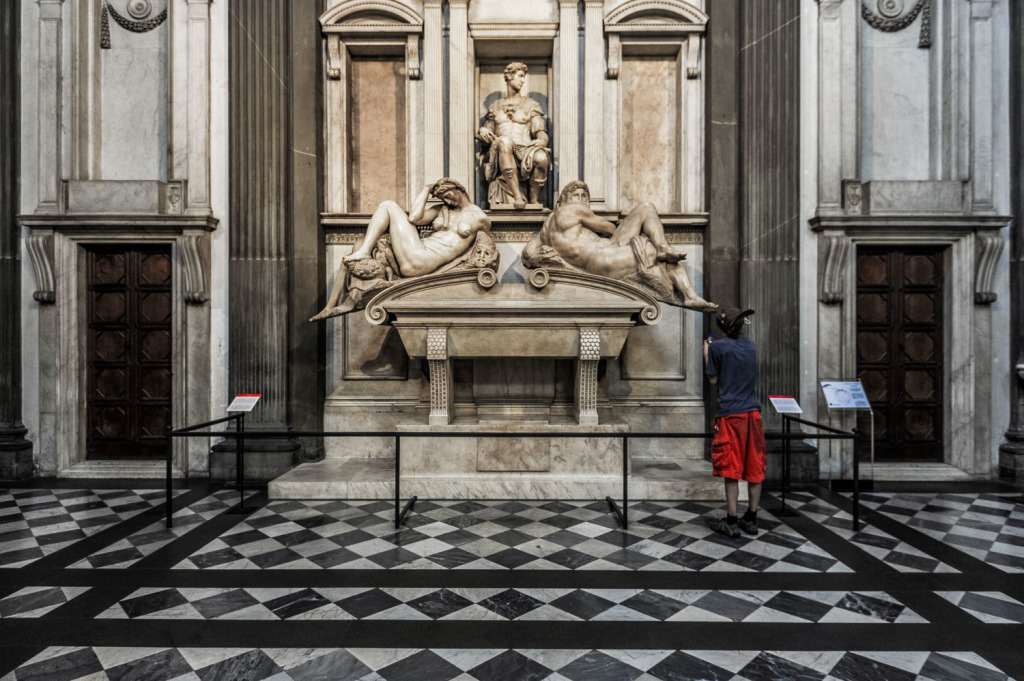 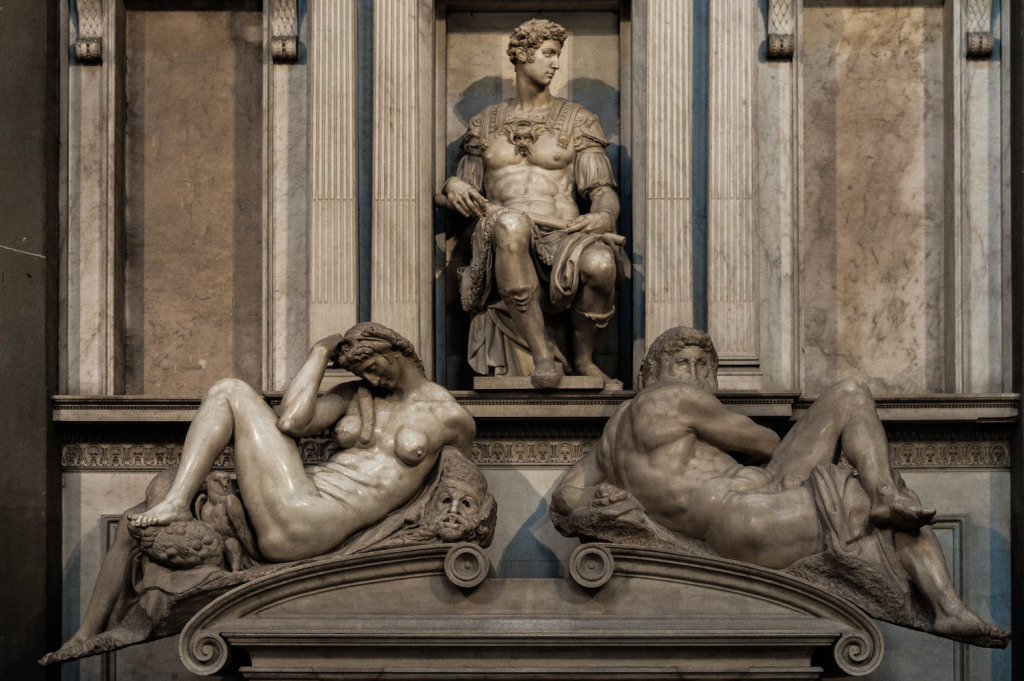 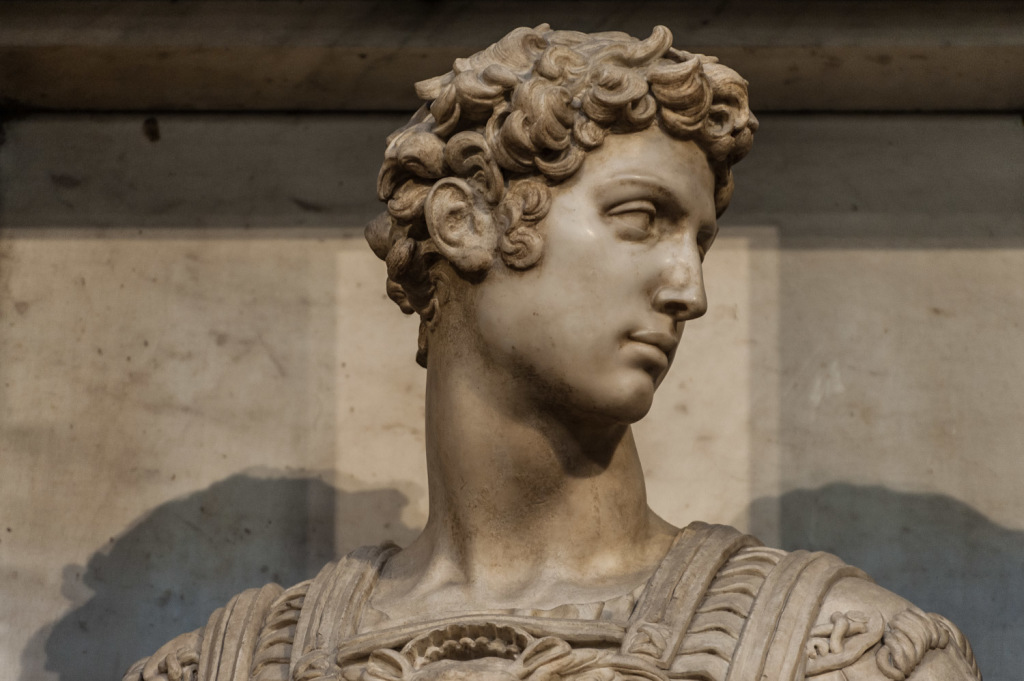 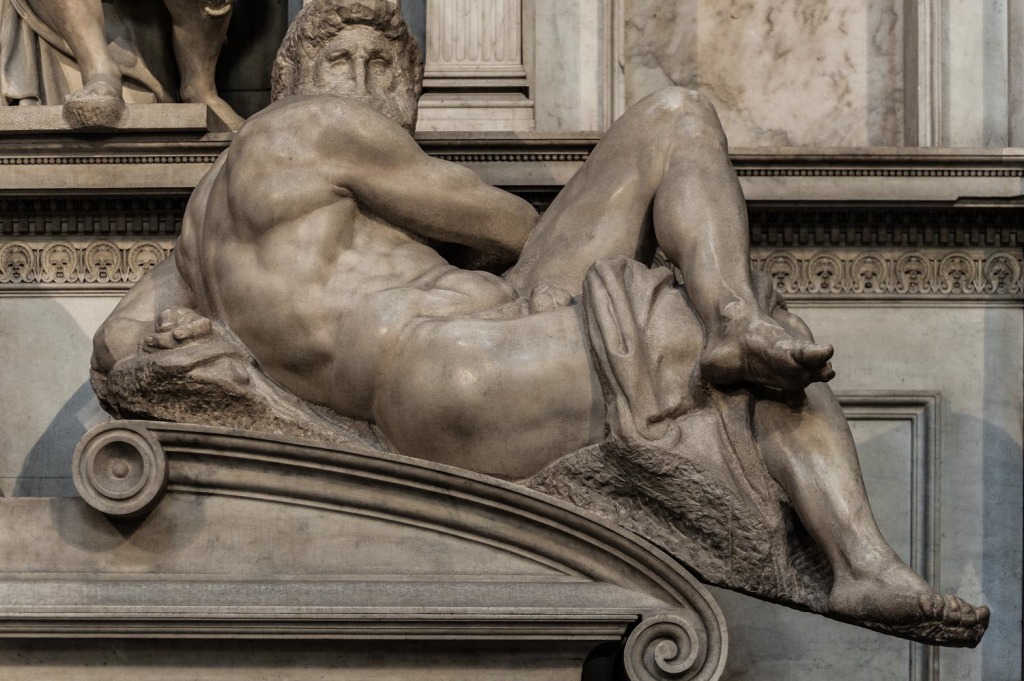 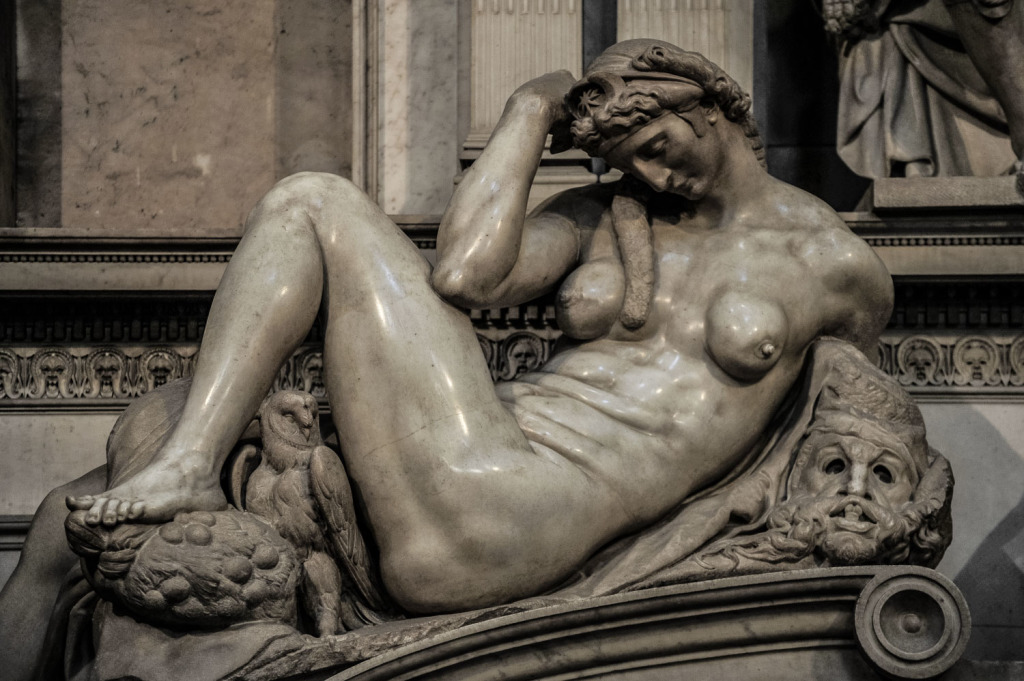 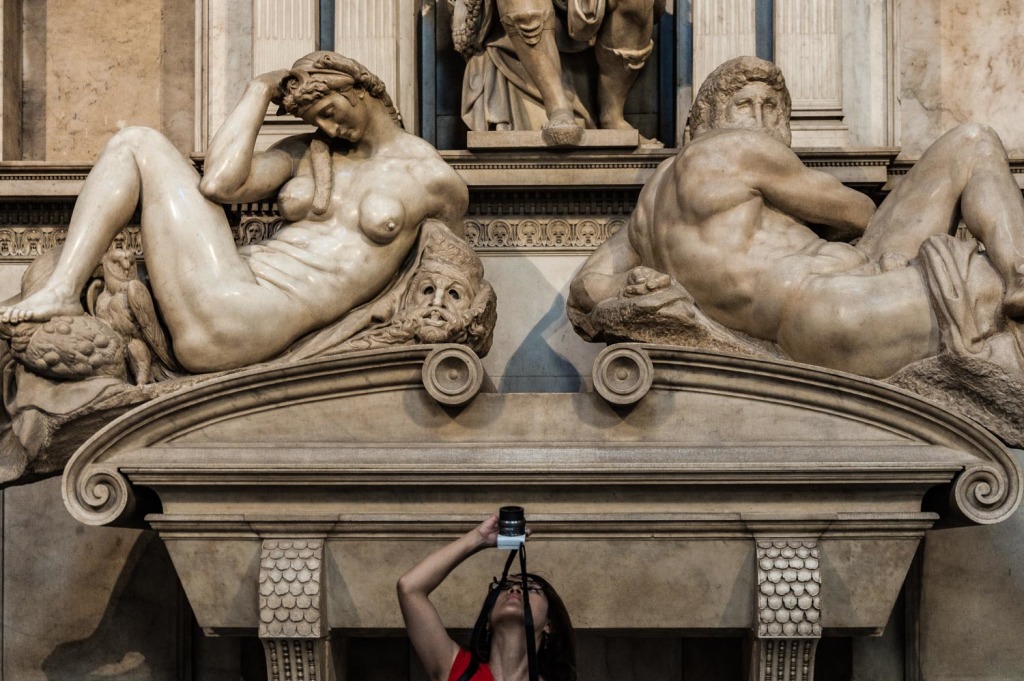 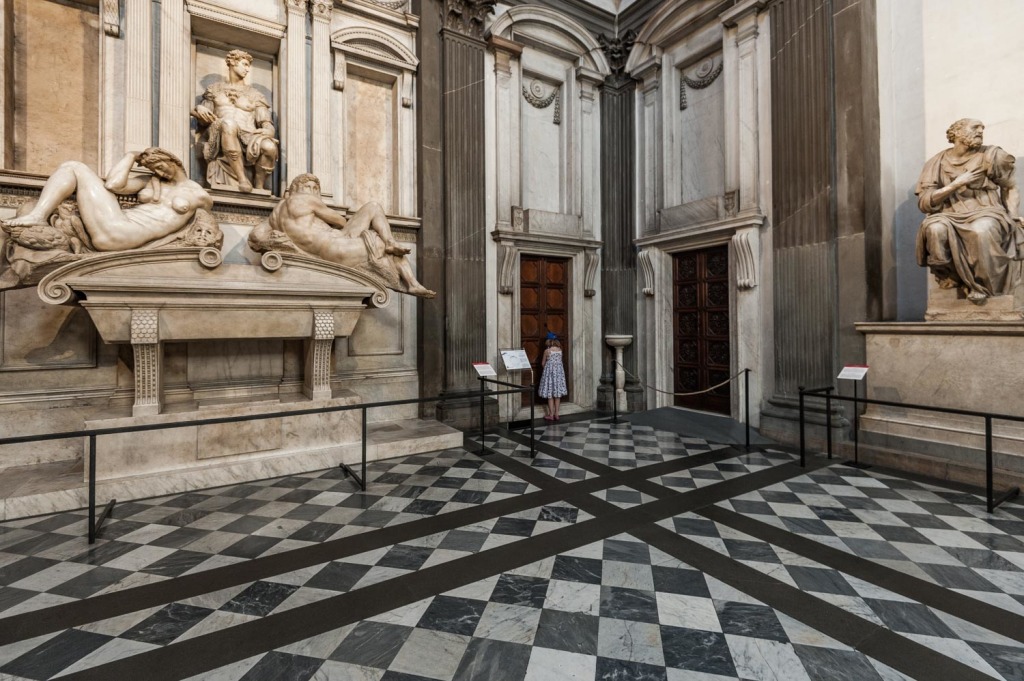 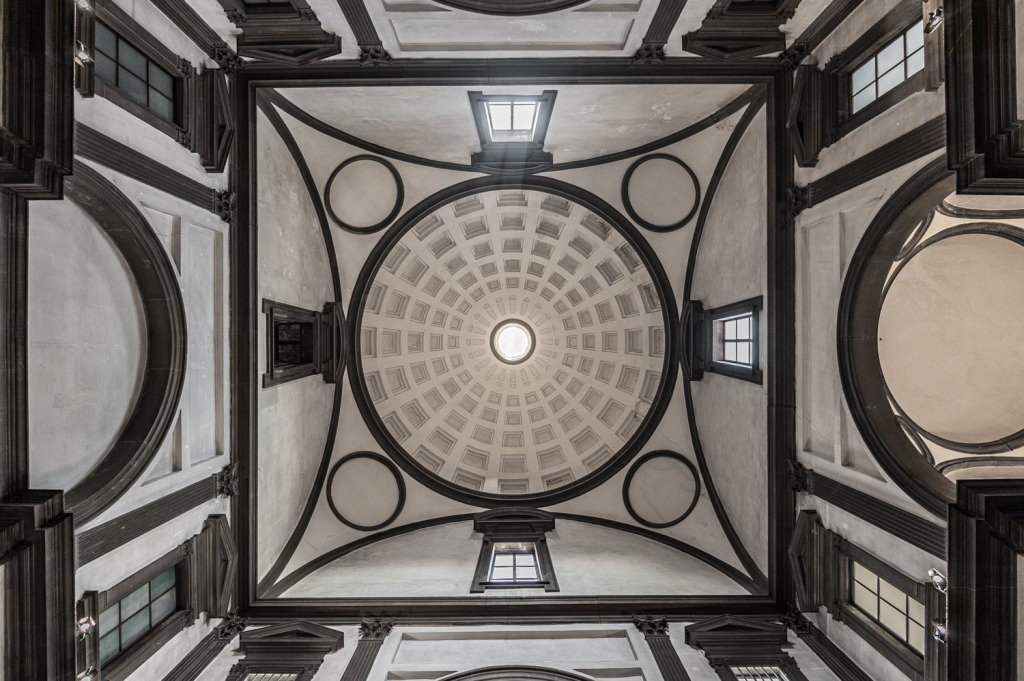 TOMB OF LORENZO, DUKE OF URBINO

Michelangelo sculpted the tomb of the Duke of Urbino (1492 – 1519), nephew of Leo X, during his last years in Florence between 1531 and 1532. Lorenzo, addressee of Machiavelli’s The Prince, is portrayed immersed in thought, and his pensive temperament is in line with the allegories of time placed at either side of his sarcophagus. Dawn seems to be waking from the torpor of sleep, while Dusk, in the abandon of painful inertia, seems to be about to fall asleep. 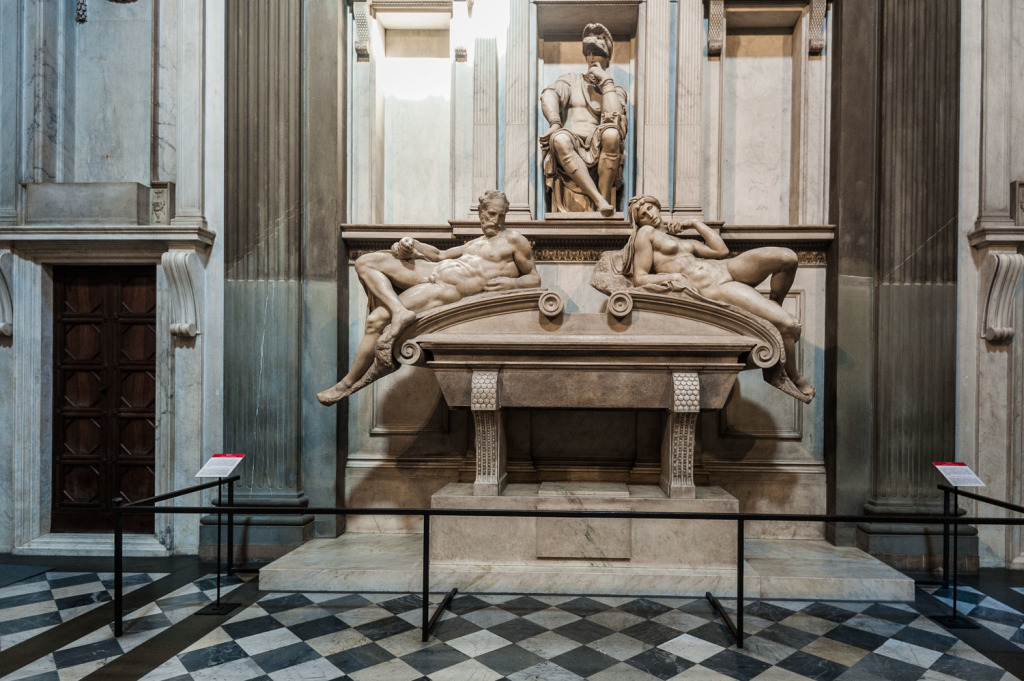 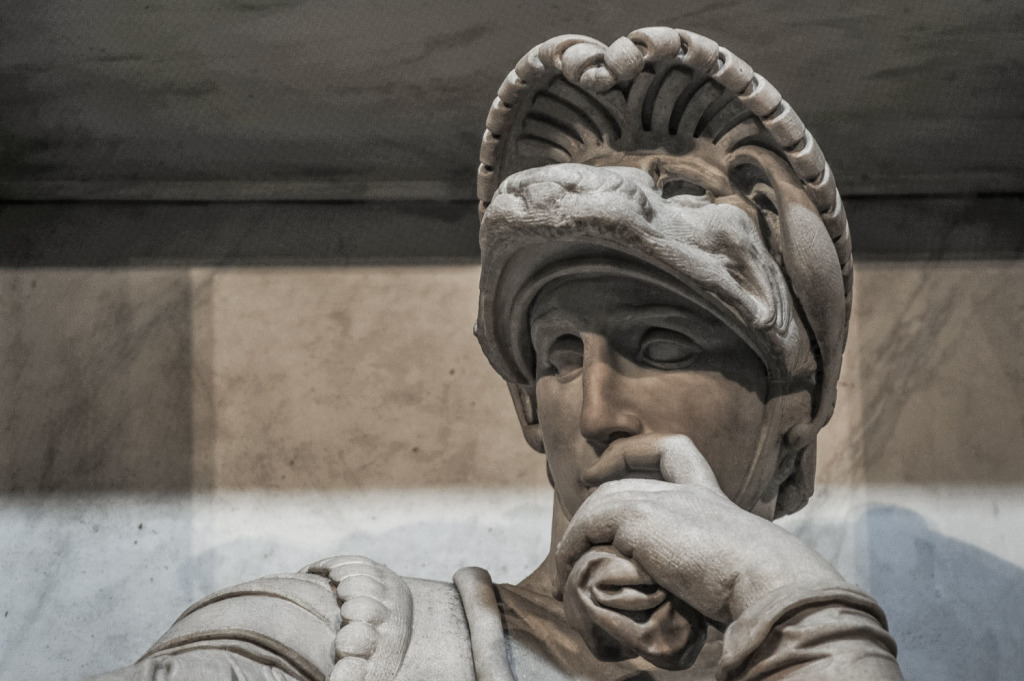 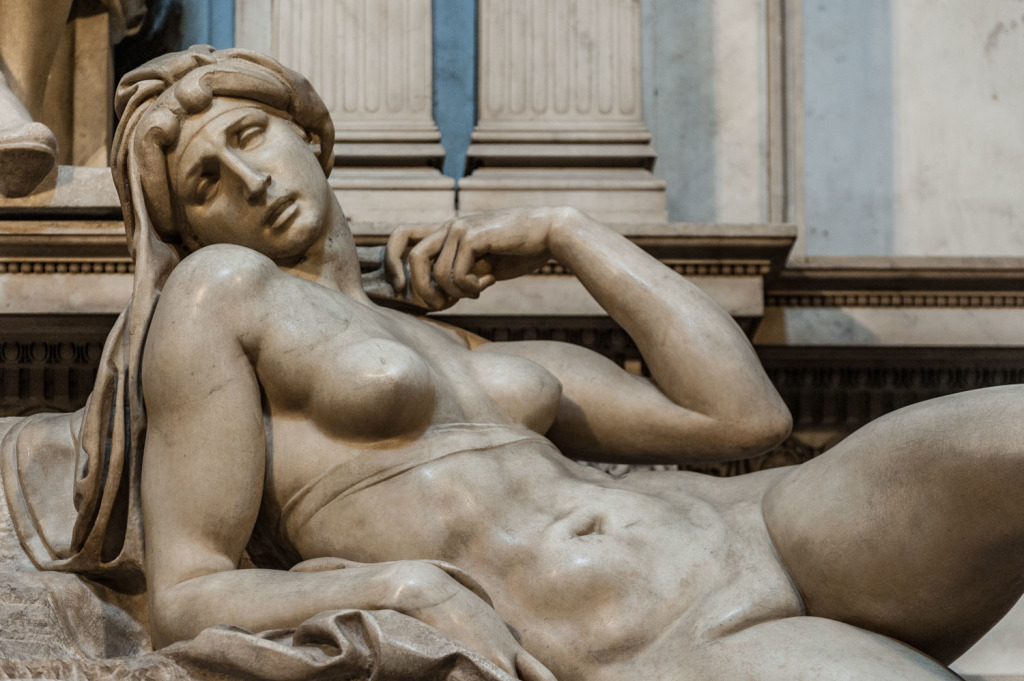 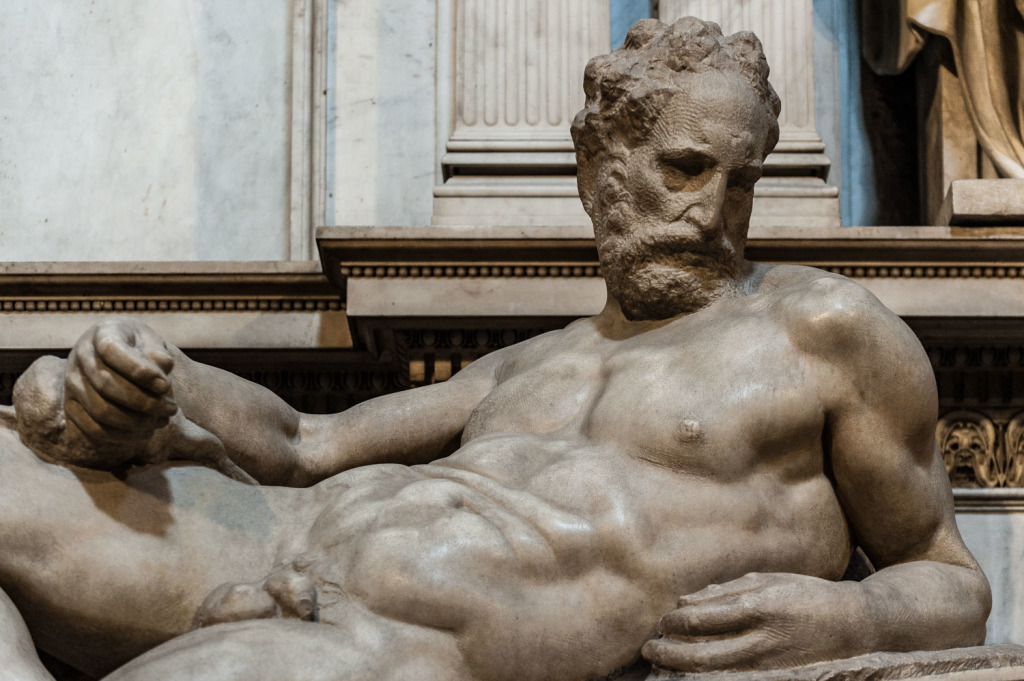 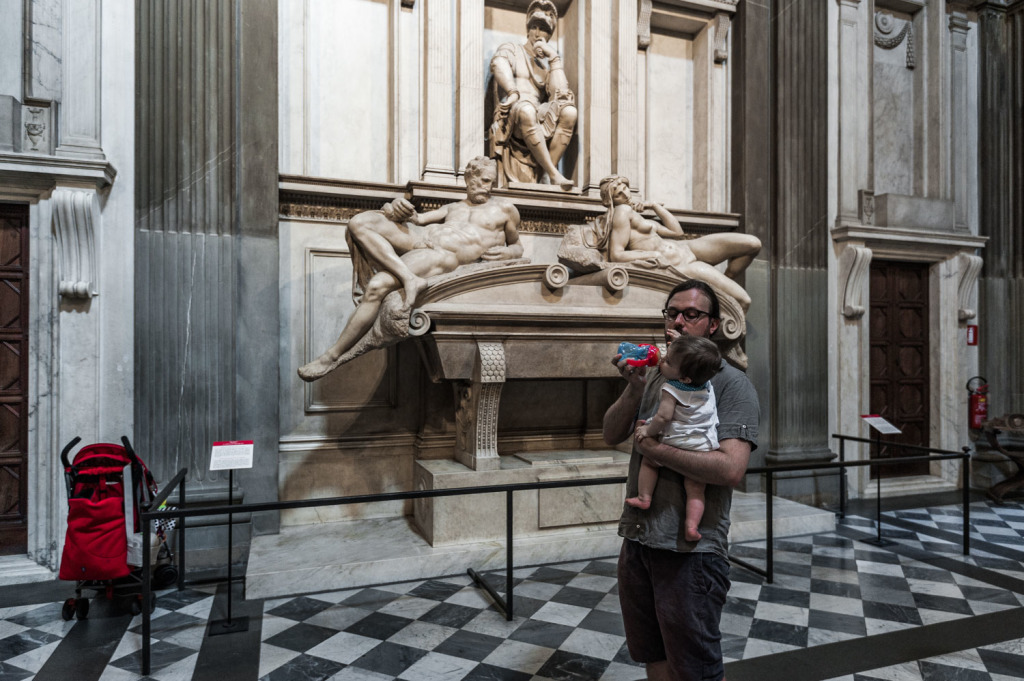 Above the tomb with the mortal remains of Lorenzo the Magnificent (who died in 1492) and his brother Giuliano (killed during the Pazzi conspiracy in 1478) three sculptures abide. The one in the middle is the Madonna and Child, an autographed work by Michelangelo in 1521. On the left is Saint Cosmas by Giovan Angelo da Montorsoli, while on the right is Saint Damian by Raffaello da Montelupo. Vasari had the sculptures placed here in 1554. 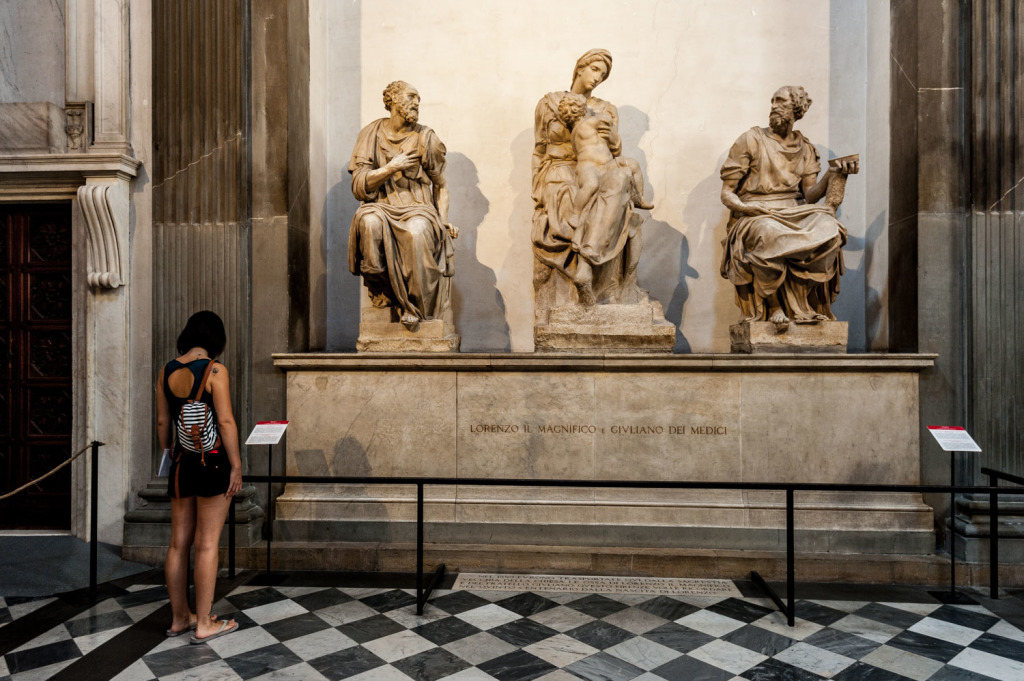 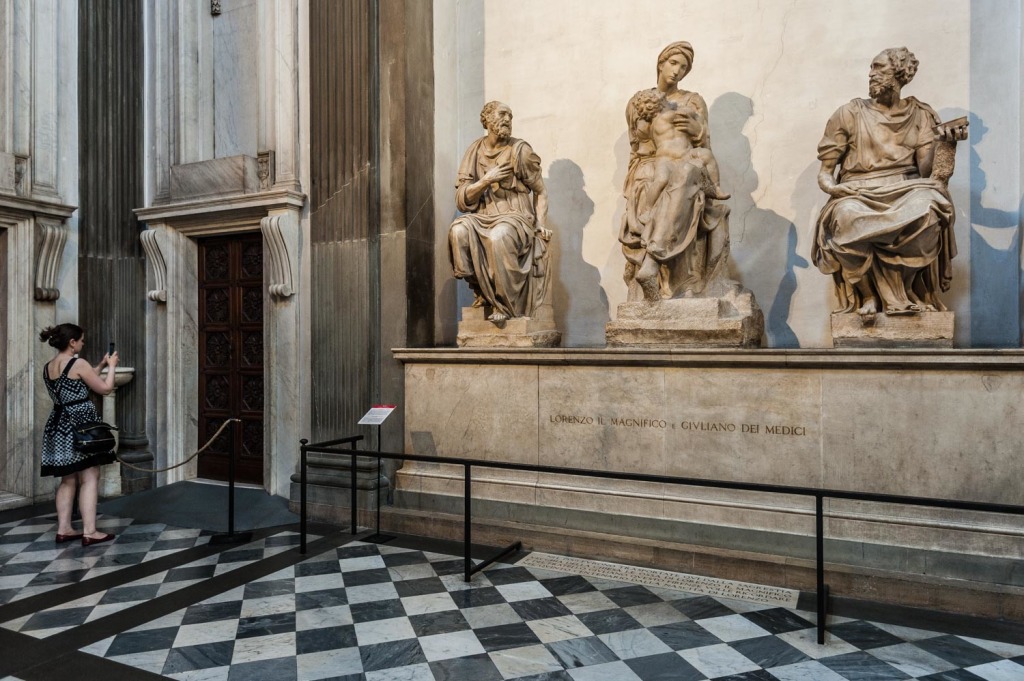 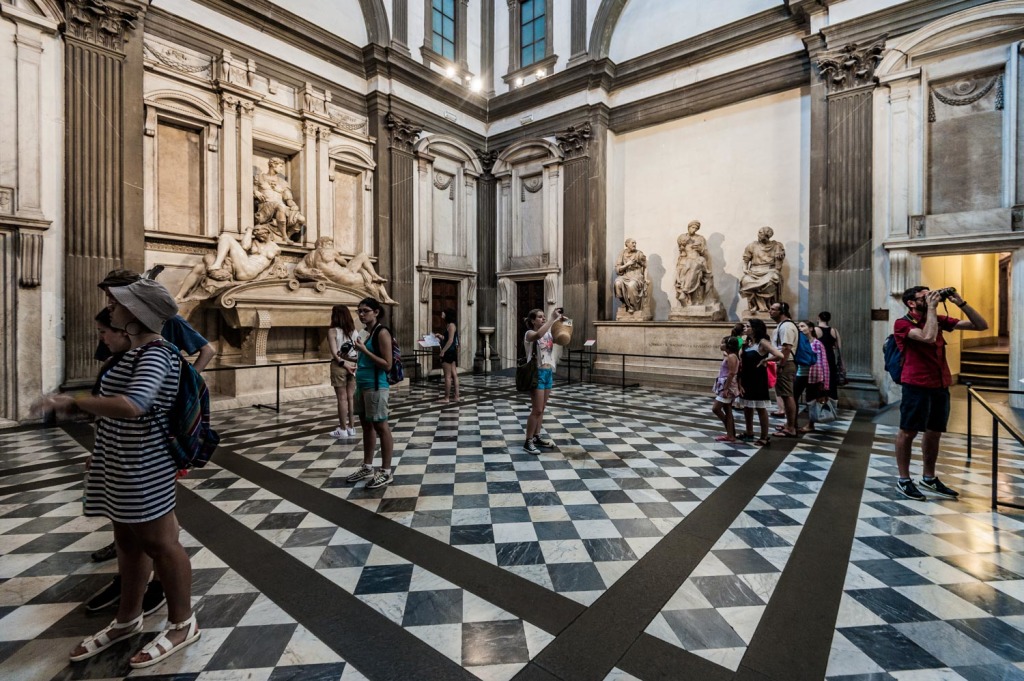