a significant example of civil and religious architecture between baroque and rococo in Bavaria, Southern Germany 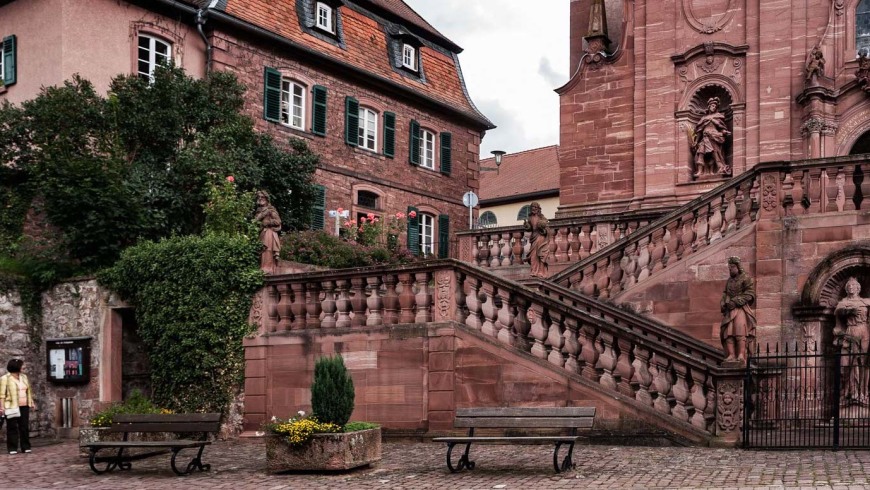 Amorbach Abbey was a Benedictine monastery located in the district of Miltenberg in Lower Franconia, Bavaria, Germany. It was one of the four Carolingian foundations intended to establish Christianity in the region of the Odenwald. According to legend, a count (Gaugraf) named Ruthard called the Frankish bishop, Saint Pirmin, to the area to set up a monastic settlement with a chapel at the entrance to the Otterbachtal. A disciple of Pirmin, an Aquitanian called “Amor” supposedly then moved the monastery to its current location in 734. By 800 it had become a Reichsabtei, the abbot being directly answerable to Charlemagne. Pepin united it to the Bishopric of Würzburg, although control of it was much disputed by the Bishops of Mainz. The abbey played an important role in the clearing and settlement of the vast tracts of forest in which it was located, and in the evangelization of other areas, notably Saxony. In 1446, the priest Johannes Keck brought reliquaries of a “Saint Amor” and a “Saint Landrada” from Münsterbilsen, near Maastricht, to the church Amorbrunn, which started to attract pilgrims. After the end of the Thirty Years’ War, in 1648, people came in search of help for childlessness. In 1656 the Bishops of Mainz and Würzburg reached an agreement: Amorbach was transferred to the control, both spiritual and territorial, of the Archbishop of Mainz, and significant building works followed. 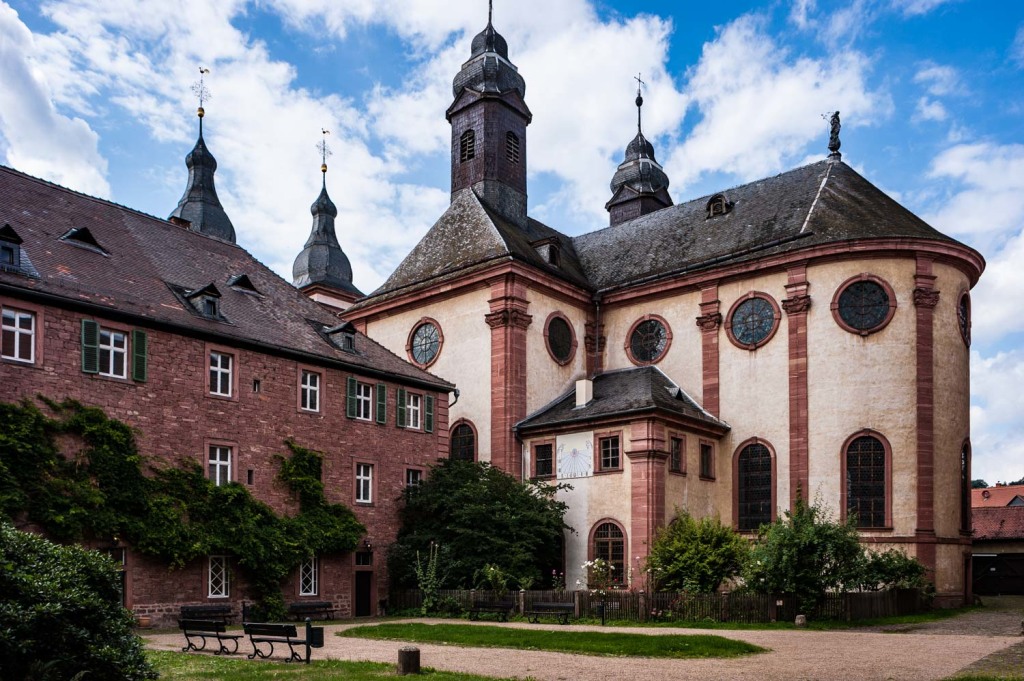 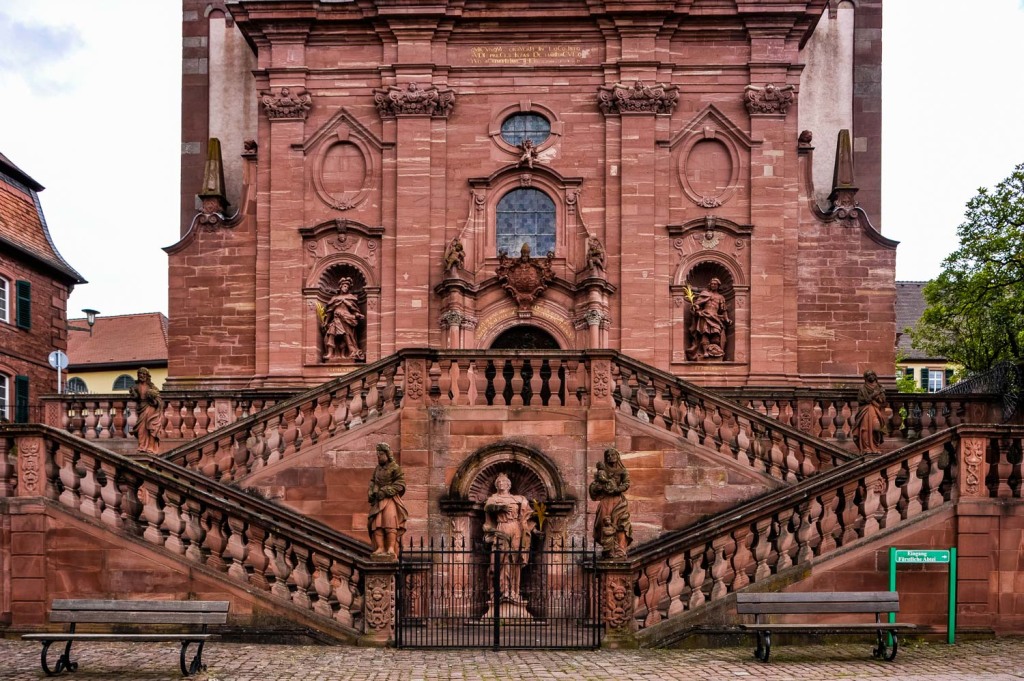 In the 1740s the site was completely refurbished in the late Baroque/early Rococo style, of which it remains a significant example, under the supervision of Maximilian von Welsch. From 1742-4 the abbey church (Abteikirche) was built, incorporating the two six-storied west towers (12th century). Further extensive construction and decoration was undertaken in the 1780s, including in 1782 the installation of what was at the time the biggest organ in the world. The patrons were the Virgin Mary, with Saints Simplicius, Faustinus and Beatrix. The abbey was finally dissolved in 1803, and given with its lands to the Princes of Leiningen as compensation for lost territories occupied in 1793 by French revolutionary troops. Until 1806, a separate Fürstentum Leiningen with the Ämter Mosbach, Buchen, Ostburken, Königsheim and Grünfeld, was based in Amorbach. The princes left the abbey church to the (protestant) parish and converted the other monastic buildings into a Residenz. Jurisdiction over the abbey and its territories passed to the government of the Kingdom of Bavaria in 1816. 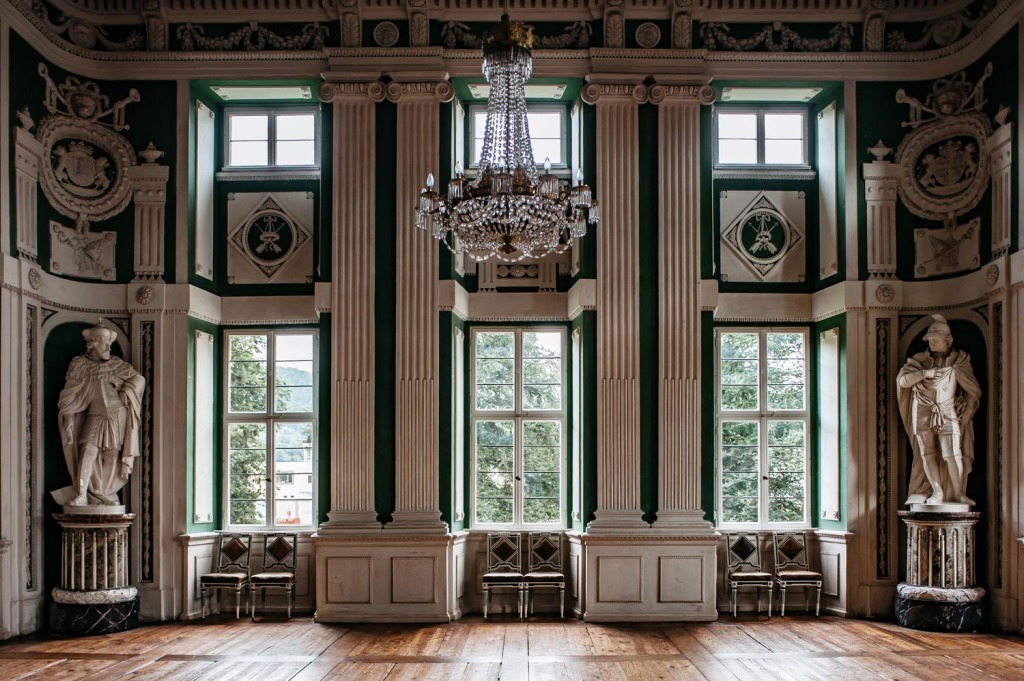 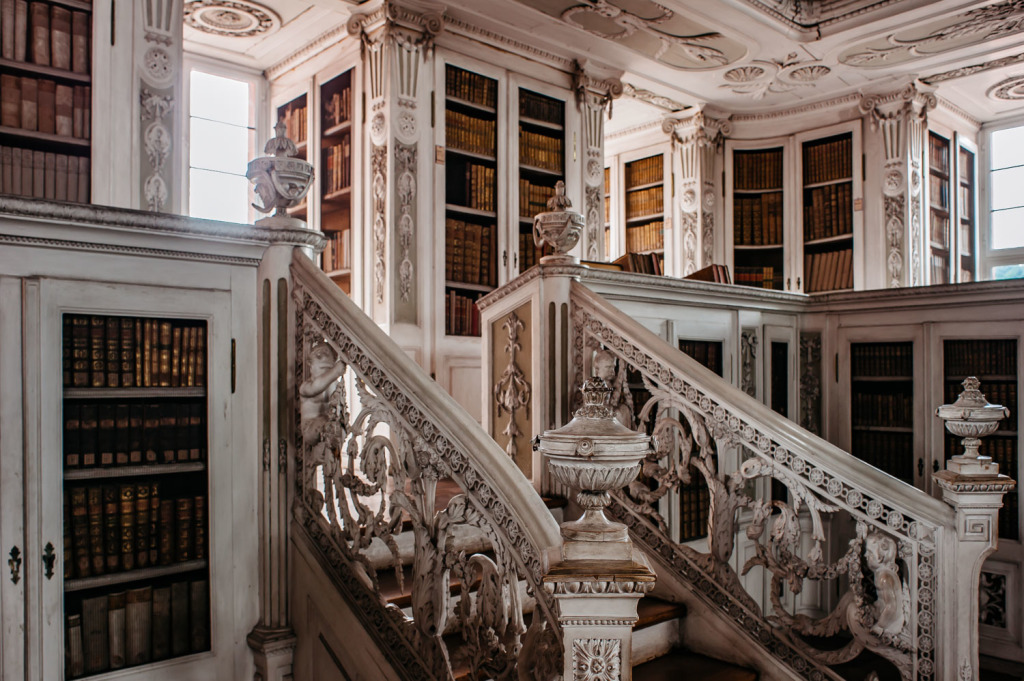 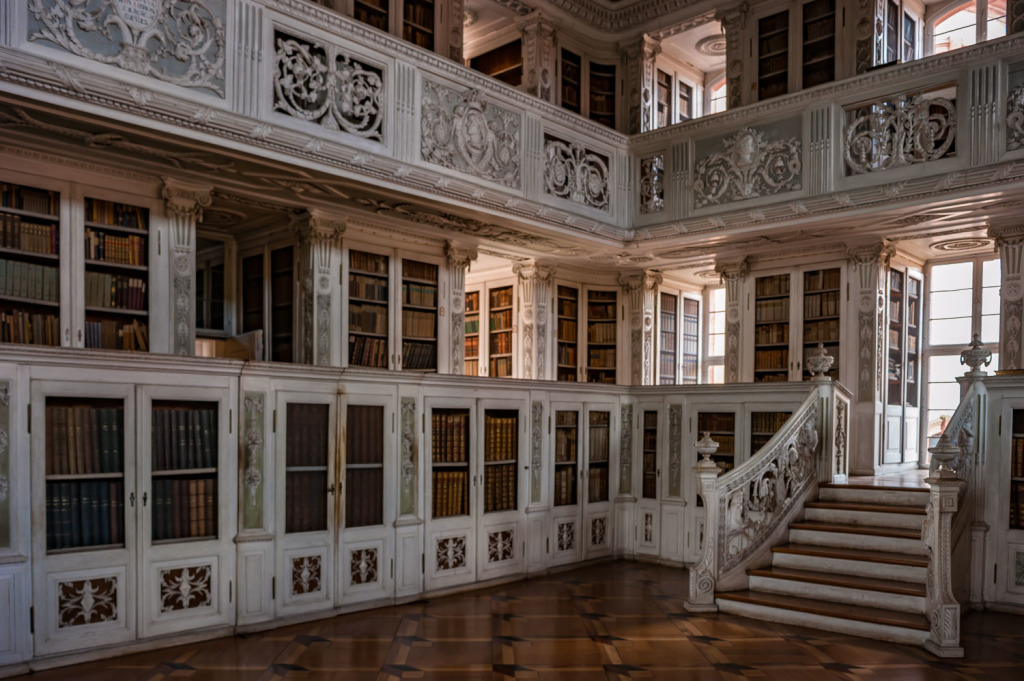 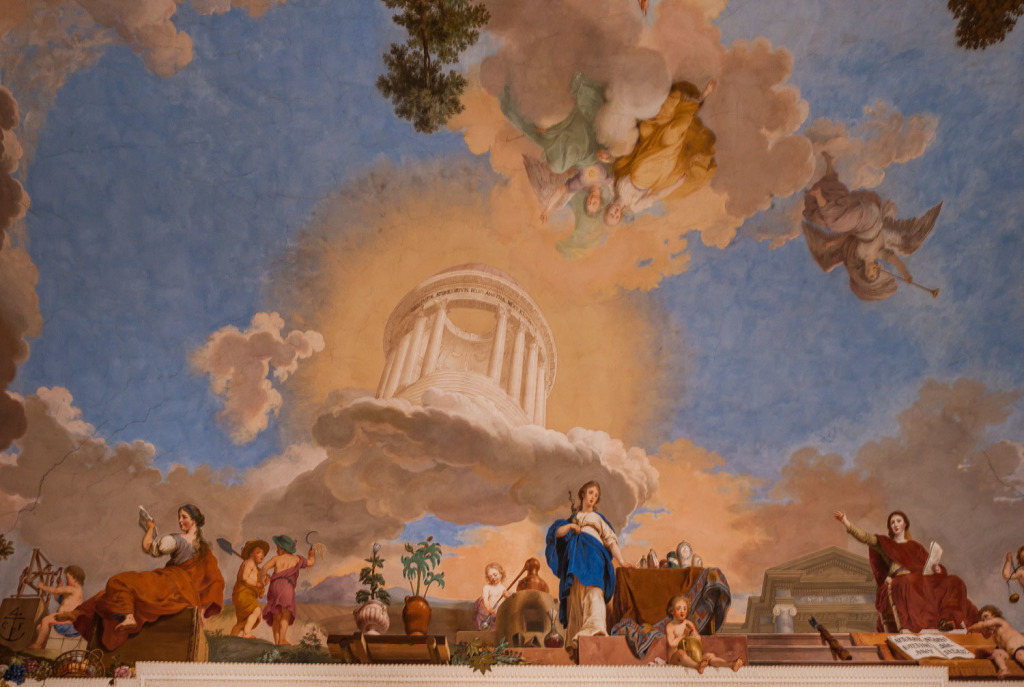 Welsch put a massive façade made from Buntsandstein before the Romanesque towers and on the pediment he placed a statue of Saint Benedict. The interior features stucco work and frescoes in late Baroque/early Rococo style by members of the Wessobrunner School. The main painter was Matthäus Günther. Günther’s main altar picture shows the arrival of Mary in Heaven, flanked by life-sized statues of her parents, Joachim and Anne. The stucco-workers who made the ceiling above also added the altars in the northern and southern transept in 1747. The choir screen from wrought iron was made in 1748-50 by Marx Gattinger from Würzburg, who had also worked with Oegg on the fence in front of the Würzburg Residence. The gold-covered pulpit, by Johann Wolfgang van der Auvera, from 1749 is already more Rococo than Baroque. The organ is a Stumm organ, built in 1776-82, by Johann Philipp (1705–1776) and Johann Heinrich (1715–1788) of the organ-building Stumm family. In their work at Amorbach, the Klangideal (“sound-ideal”), a synthesis of Southern German and French organ building, could be thoroughly realized. The organ has 5,116 pipes and 30 percussion devices shared across 66 stops, and is played from four manuals and one pedalboard. 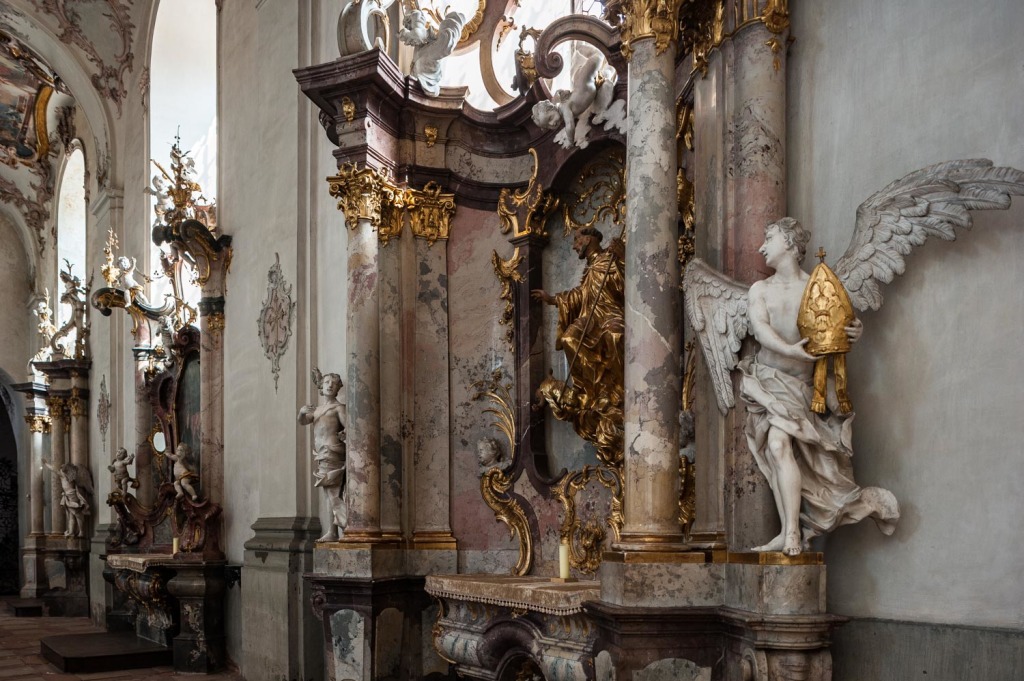 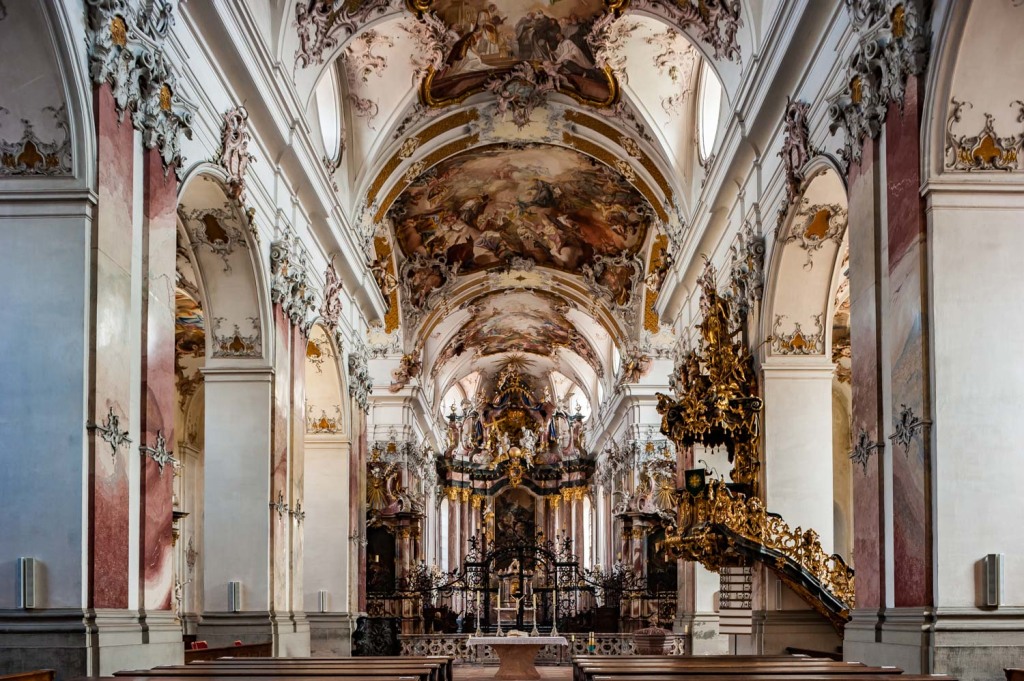 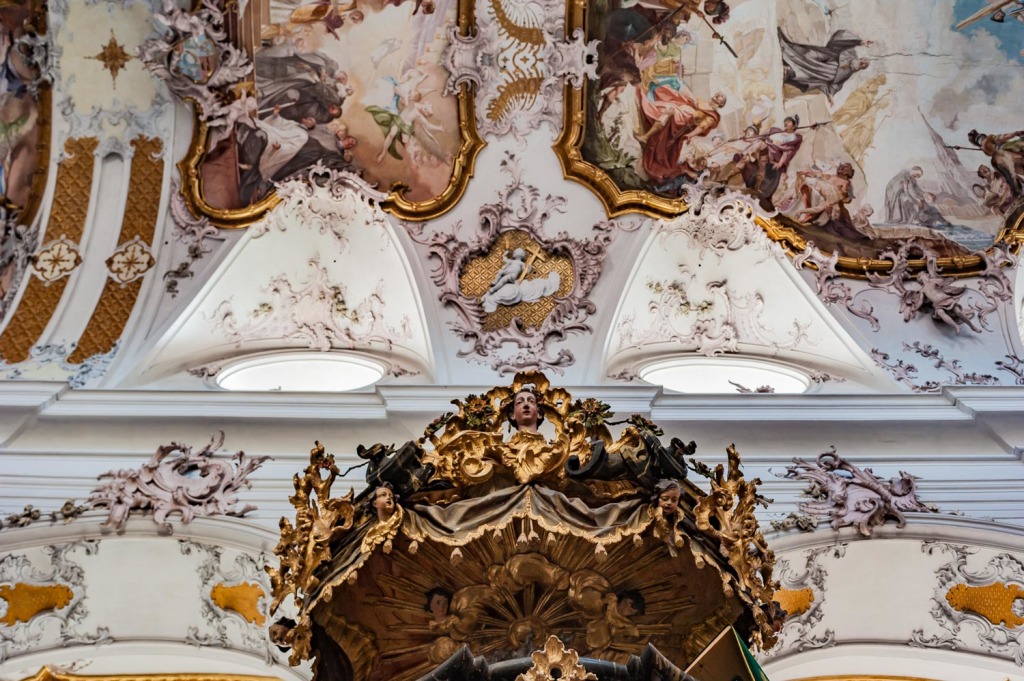 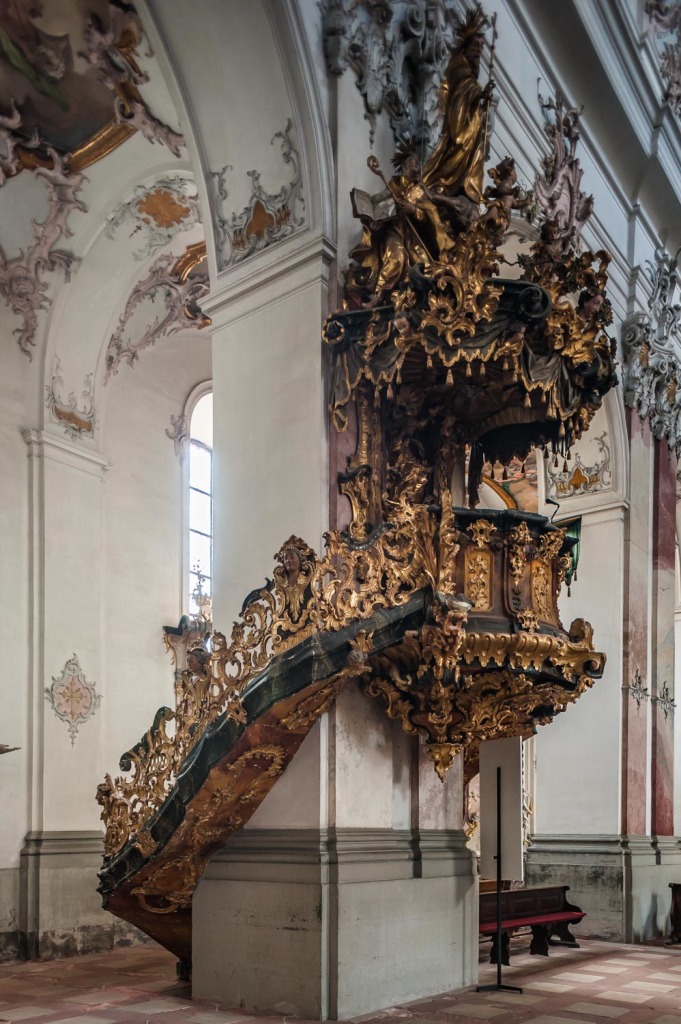 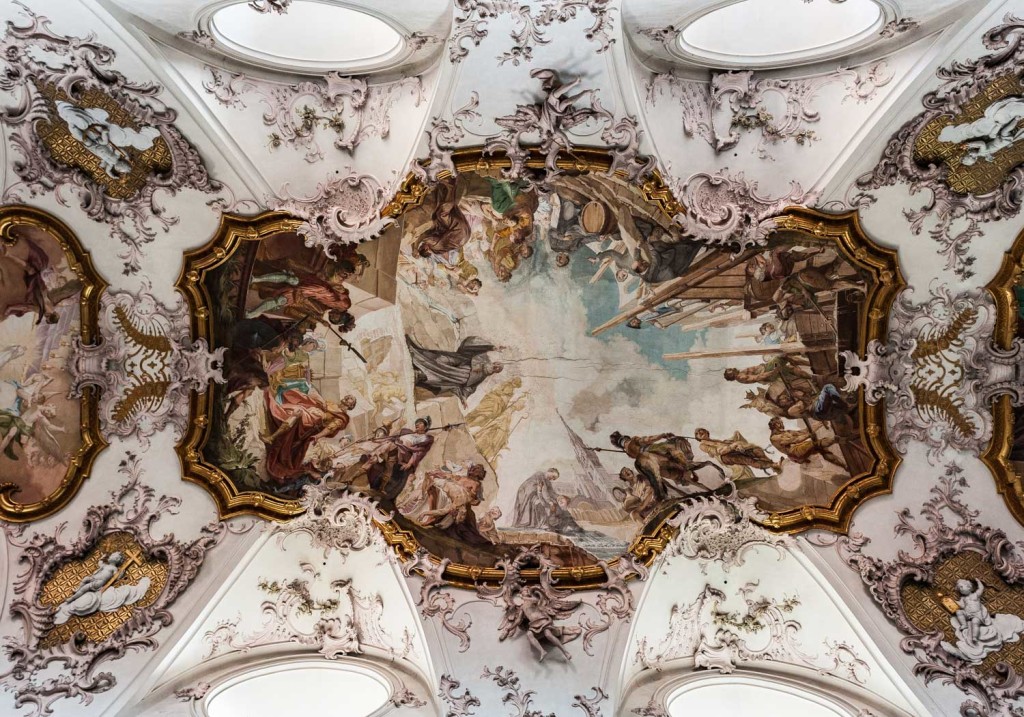 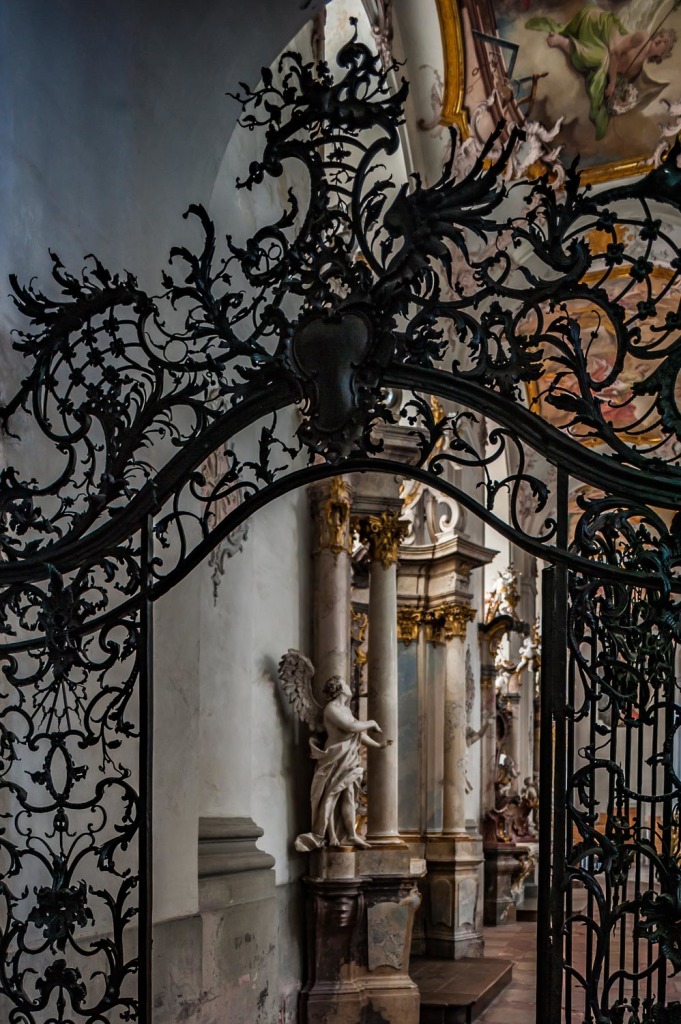 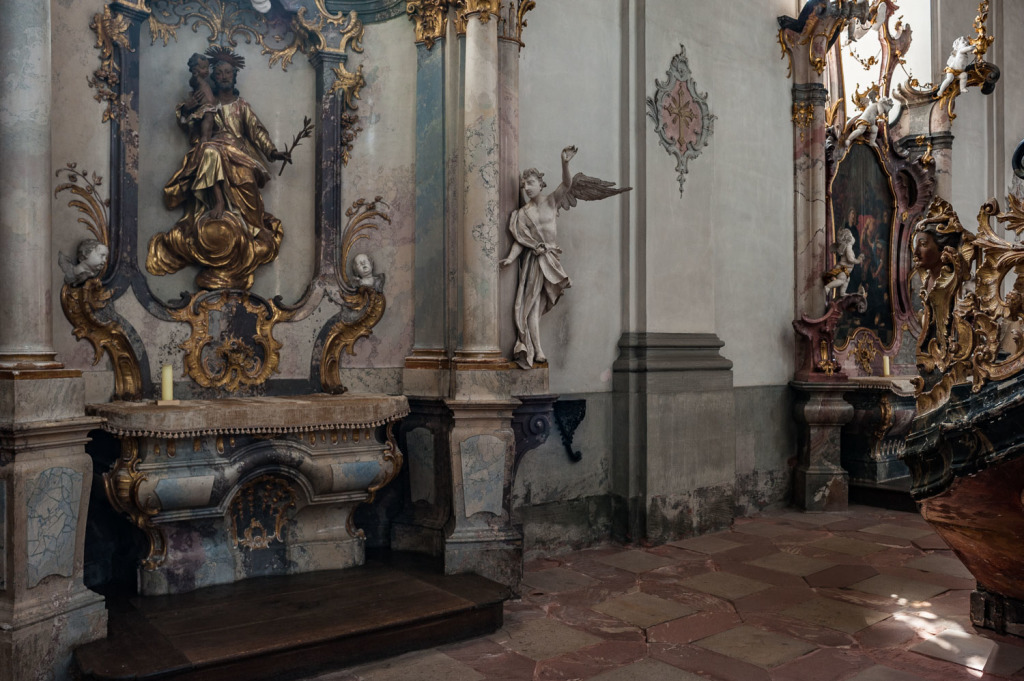 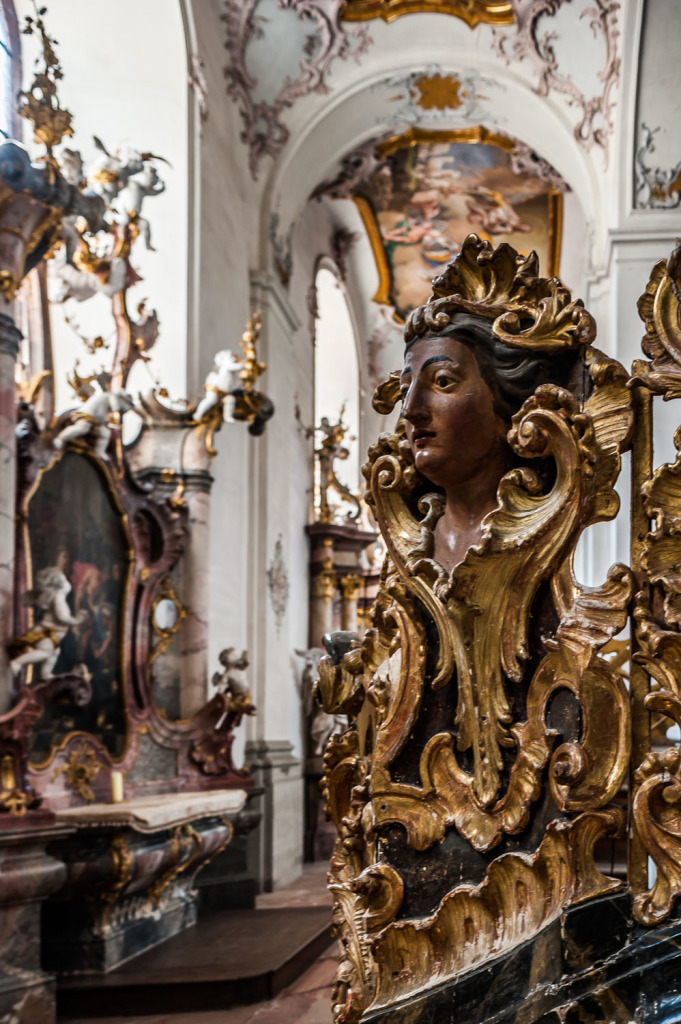 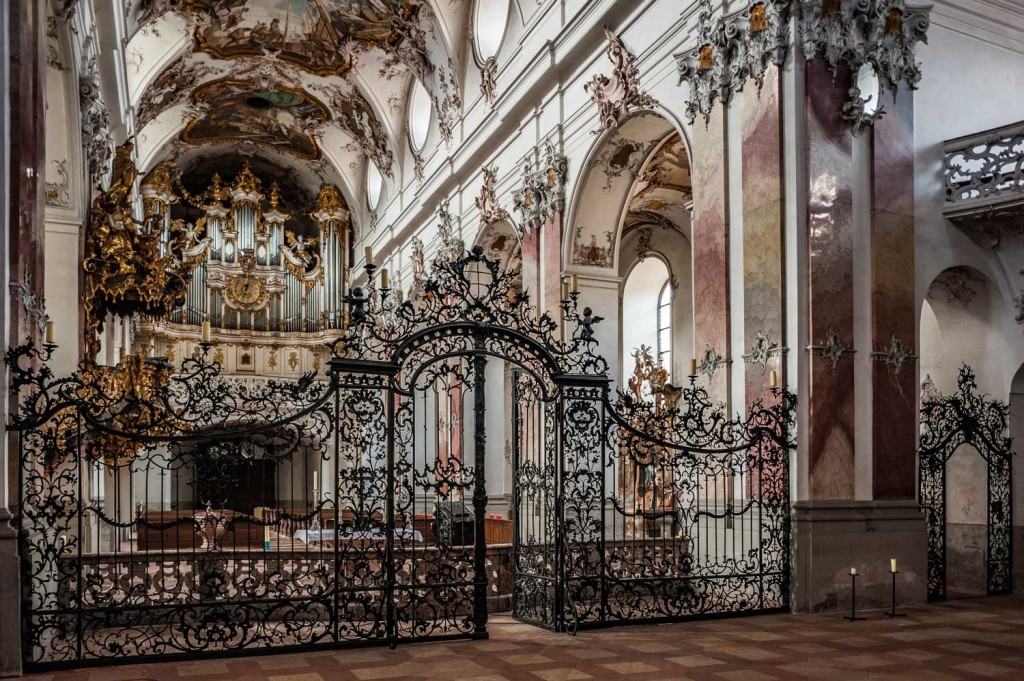 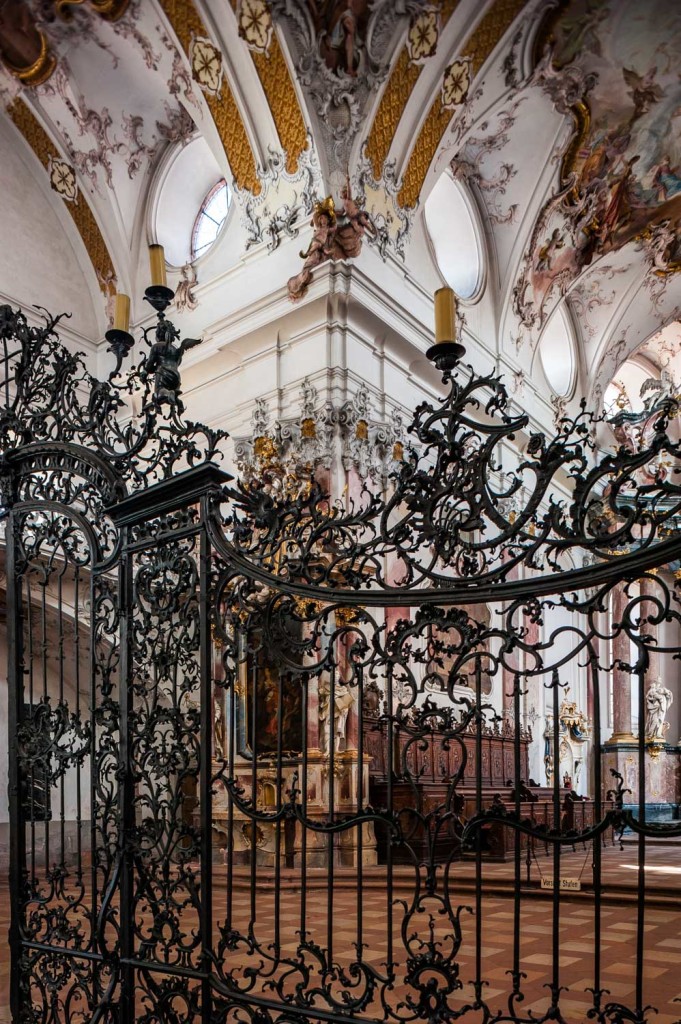 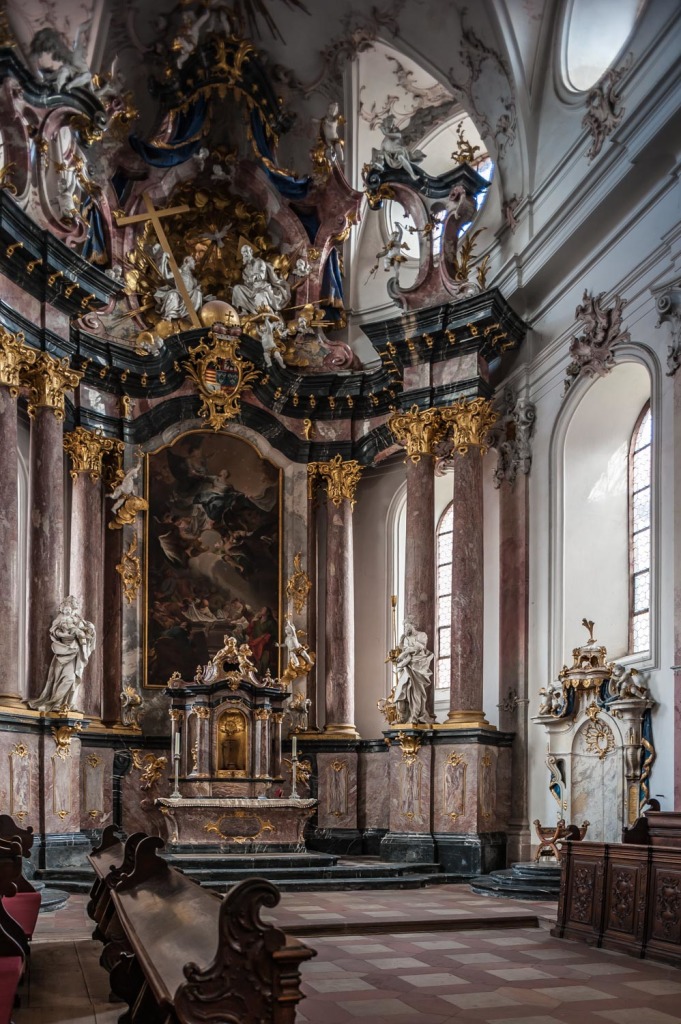 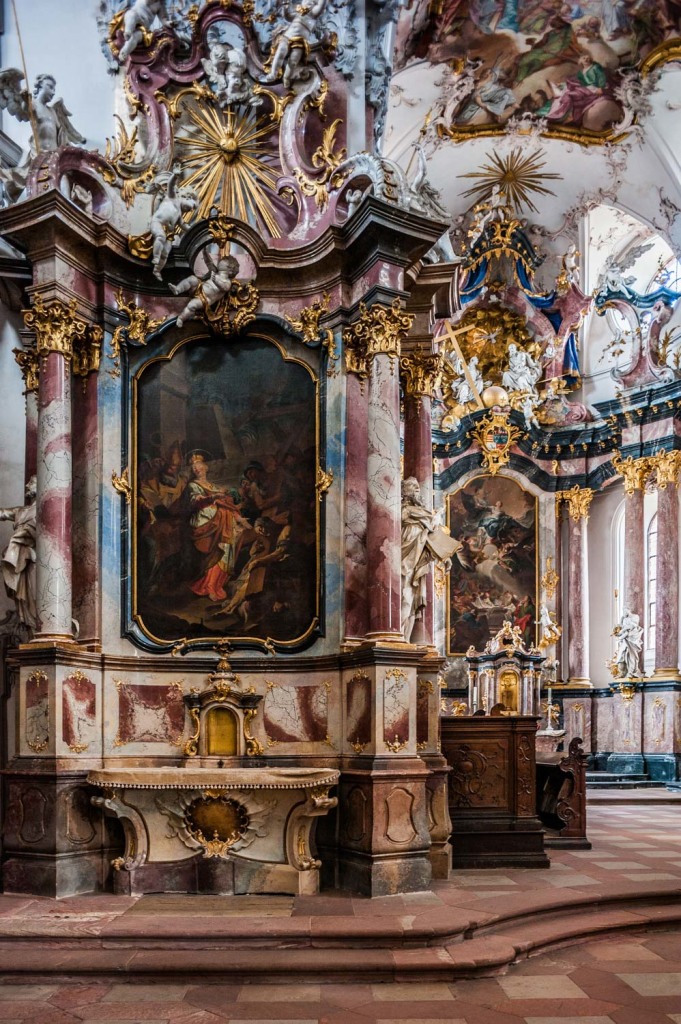 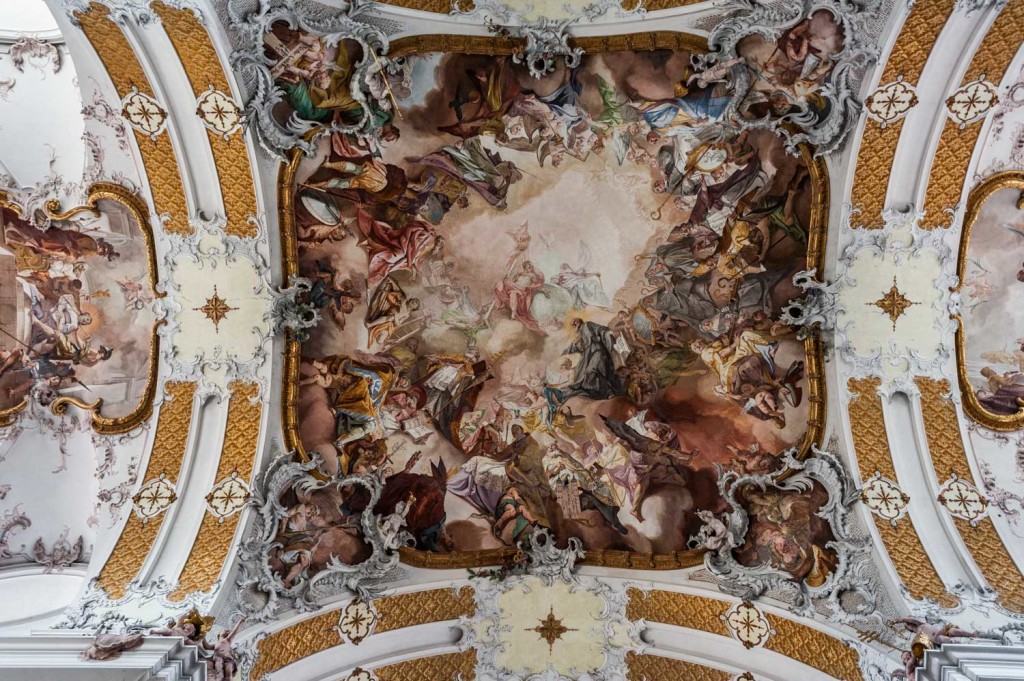