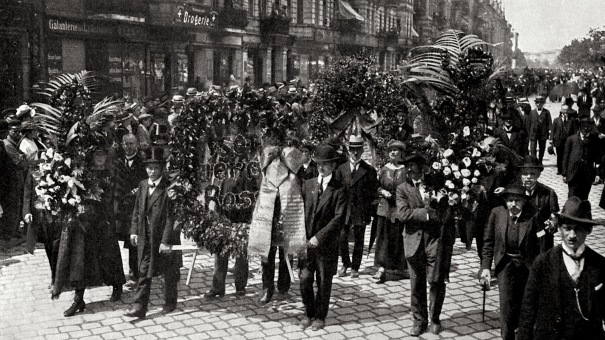 The funeral of Rosa Luxemburg

Between the end of 1918 and the first days of 1919, Berlin is burning. Germany, who caused the war, is humiliated, the Empire ended. What future is there? Republic, revolution, soviet …? The answer is in a brief, dramatic civil war.

Rosa Luxemburg was a heroine of the socialist struggle against war. She spent three years in prison for organizing strikes and antimilitary demonstrations. She created the Spartacus League and then the German Communist Party. She was seen as a threat to all those who wanted a return to order while the country, restless, licked its wounds. In early January 1919 the red flags wave in Berlin and the Communists occupy the offices of the newspapers. It looks like the revolution. The social democrats are in government: Friedrich Ebert, old party fellow of Rosa Luxemburg, is the Prime Minister. But in defense of the nascent republic, Freikorps’ violence, paramilitary groups of volunteers that the government encourages, is unleashed against the Spartacist moto. On January 15th, 1919, Rosa Luxemburg and Karl Liebknecht were arrested and then killed. Rosa’s body was thrown into a canal and disappeared. She was a brave and brilliant woman, theoretical of a radical and open Marxism. Her body (if it was her’s) was found at the end of May 1919 and on the 13th June her funeral was held.

It was difficult to recognize the revolutionaries in the front rows of the procession. Moreover, even in the cold days of the Spartacist revolt,  on the Unter den Linden boulevard there were both workers and men in dark overcoats bracing their rifles. Now, the nineteenth-century revolutionaries wearing great cloaks and red shirts were gone. The funeral of Rosa Luxemburg accompanies the end of all revolutionary perspective in Germany. Bertold Brecht mourned Rosa Luxemburg with this epitaph:

Die rote Rosa nun auch verschwand / Wo sie liegt, ist unbekannt / Weil sie den Armen die Wahrheit gesagt / Haben sie die Reichen aus der Welt gejagt (Now also the Red Rose is gone / Where she buried we do not know / Because she told the truth to the poor / The rich had her sent into the afterlife).