PUCCINI, THE MOTORCARS AND THE FUTURISTI 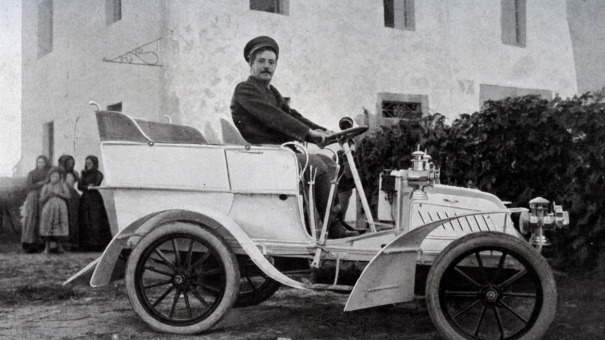 When Puccini was able to abandon the bohemian life of a poor student in Milan, after the success of the Manon Lescaut (1893), La Bohème (1896) and Tosca (1900), and when he began to get envelopes bulging with bank notes from his agents,  his passions of a young Tuscan man from the province could explode without restraint. They were hunting (how many coots, how many snipes, how many rabbits he will have fired at!), Smoking (seventy odd cigarettes a day) and the taste for speed tested on the new mechanical means.

First, on bikes: he loved the New Turner, the Adler, the Marchand, the American Humbers. And he wrote about them with competence: giving advice to his brother in law on how they applied the chain cleaner, rubber fenders, on how one cleaned the gears with oil …

He began to devote himself to motorcars in 1901, when he bought a small De Dion Buton motorcar. But shortly after he wanted a Clément and a Fiat 60, and then the Isotta Fraschini 14/22 HP and the La Buire and the Atala, and the Fiat 501 and finally the Lancia Trikappa, and the Lambda, the Italian Rolls Royce…

On February 25th, 1903 Puccini goes to Lucca for a medical examination (sore throat, cigarettes …) and for a dinner with friends. He is accompanied by his wife, his son and the driver. After dinner, in the Clément, a car with open bodywork, Puccini goes back to Torre del Lago. Twenty kilometers of dirt roads in the cold; the speed of those days, an hour away. In the middle of the countryside the car skids, and falls into a deep ditch. The passengers are thrown out: Puccini has a fractured tibia, the driver a fractured hip. the wife and son will come out with only a few scratches and and very frightened.

Help will soon arrive – everyone was awake waiting for the passage of Puccini’s car … – but the fracture is a difficult one. After the first treatment the wounded man was transported by boat to his villa. Convalescence lasted several months, during which he completed the composition of the Butterfly. Exactly one year after the accident, on Feb. 25th, 1924, the opera was staged in Milan and was a terrible fiasco.

Ten days later, Puccini was in Turin to buy a new car. It was a De Dion Buton & Phaeton. Three gears and a speed of 50 kilometers per hour. “I vent with the De Dion, he wrote to a friend, but much more would be needed”

In the months following the Butterfly would receive great acclaim and new cars entered Puccini’s garage.

It was the moment of the birth of a great twentieth-century myth. A few years later, in February 1909, the Manifesto del Futurimo would be published, in which Marinetti glorified “A racing car whose bonnet is adorned with big tubes like serpents with explosive breath …” and added: “A roaring car that seems to ride on a machine gun and is more beautiful than the Victory of Samothrace. “

Opposites in everything, in poetic and musical tastes, Puccini and the Futurists both loved the “modern” sound of the exhaust pipes that was rare then, but that would have been the background noise to the metropolitan life of the twentieth century.​​​