SERRA SANNA: THE GIANTS, THE SENATORS 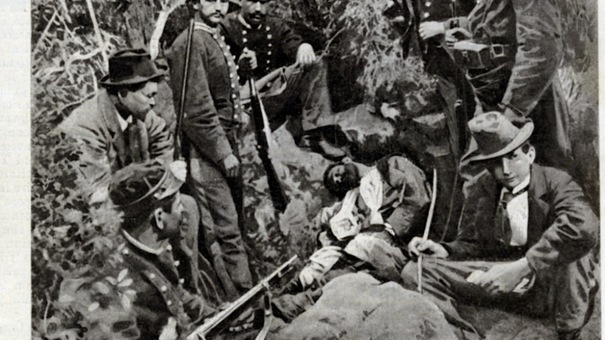 15/11/2014 | Comments: 0 | Posted by: admin | In: stories by Franco Andreucci
Bandits in Sardinia 1899
In the fifty years after Unification, the bandits were a major presence in the Italian news. Defenders of a rural world destined to disappear, Robin Hood on the outskirts of the new state, rustlers enemies of the modern law, the bandits were viewed with sympathy as peasant rebels. On the other side were the hated police from Piedmont (the Carabinieri), the occasional “bounty killers”, the local informants. At least in Sardinia, the story was slightly different: Elias Serra Sanna (the one we see in the photo) is twenty-seven years old when is killed, and is a bloodthirsty criminal. With his brother Giacomo, in the ten preceding years, he killed dozens of small and medium-sized property owners and stole hundreds of heads of cattle. His sister, Mariantonia, lives in Nuoro with her father. She walks in the city proudly and full of jewelry. The family enriched itself with theft and threats. They live well, are extortionists and eliminate those who resist. Public executions, severed hands, dismembered bodies, children assassinated with their mothers. The Serra Sanna are called “sos gigantes” (the giants) or “sos senatores” (the senators). In the end, operation “big game” organized by the Carabinieri on July 10th 1899 eliminates the gang. One of the officers was Lussorio Cau, that more than twenty years later would be appointed by Mussolini as the judge of the Special Court for the Defense of the State. He would be part of the college who sentenced the anarchist Michele Schirru to death, another Sardinian, guilty only of having planned an attack against the Duce.
Back to top
Copy Protected by Chetan's WP-Copyprotect.
We use cookies to ensure that we give you the best experience on our website. If you continue to use this site we will assume that you are happy with it.Ok