THE ZOUAVES AND PALESTRO 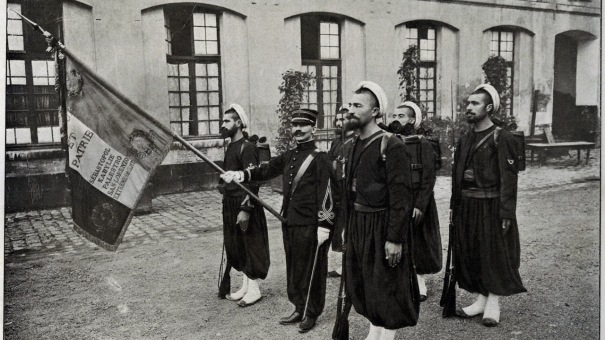 The Zouaves were originally a regiment of colonial soldiers of the French army: they were disciplined and tough, stylish and feared. Born around 1830, after the conquest of Algeria, and their name is derived from that of a combative Berber tribe. Initially recruitment was mixed, but after 1841 it was reserved only for metropolitan French. In the Second Empire (1852-1870) the Zouaves participated in the most important military initiatives of Napoleon III. In Italy they fought alongside Piedmont in the War of Independence (1859) in Palestro, Magenta and Solferino. In the victorious battle against the Austrians in Palestro the Zouaves fraternized with the Bersaglieri. The 3rd Regiment named Vittorio Emanuele II Corporal of Honor and the future King of Italy returned with a gold medal for military valor. The Zouaves left a trace in the costume of the nineteenth and twentieth century almost to become an icon. One says: to wear zouave breeches, i.e. wide trousers that reach just above the ankle with generous puffs. In French faire le Zouave means being a boaster or simply behaving like an idiot…
And then there’s Van Gogh, with the beautiful portrait of Milliet, sergeant of the 3rd Zouaves Battalion, precisely in Palestro.

Blue, red and pale blue are the colors that are intertwined in the complicated iconography of the Zouaves. In their flag there is the motto of the French: Honneur et Patrie. Their uniform was expensive. Maybe that’s why they were dismissed in 1966.

The Zouaves and Palestro, however, are also the source of a sad story, that of Domenico Bassetti that from Lasino, near the Monte Bondone in Trentino – then part of the Habsburg Empire – went to fight as a volontary with Piedmont. He had known the Zouaves in Palestro and after the war, because he could not go back, he decided to move to Algeria along with a group of co-villagers bought a large plot of land and founded a community which they named Palestro. It was 1867. In Kabylie they wanted to cultivate the vines, transfer their trades and construct in the style of their homeland. But the growing struggle against the French and the rebellion led by Mohammed el-Hadj el-Moqrani gave rise to numerous killings of Westerners. In April 1871 the 50 Trentino men from Palestro were slaughtered. A monument was persevered in their memory until the independence of Algeria (1962). Today the old Algerian Palestro is named Lakhdaria and is about seventy miles from Algiers.