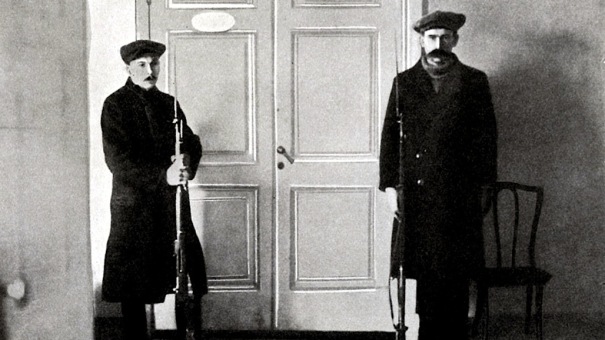 John Reed’s wife (Ten Days that Shook the World) was called Louise Bryant and wrote a short story on her six months of living in Russia around the revolution of 1917. Louise loved to be entertained by the Trotskys who, like Lenin, were living at the Smolny Institute, the headquarters of the Bolshevik revolution. Louise writes, speaking of Trotsky’s room: ” Outside the door two Red Guards kept constant watch. They Looked rather menacing, but were really friendly”.

Not much is known of the two guards who were, without uniform, outside of Lenin’s room – number 67 – but something is known about the Smolny Institute, and about what it was during the first months of the revolution. The Smolny Institute was a beautiful and impressive building in the Palladian style commissioned and built by Catherine II in St. Petersburg as the College of Society for the education of noble girls. Lenin, Trotsky and other Bolshevik commissars moved in during the days immediately following the revolution. They lived in the rooms of the professors (a bed and a work table separated by a screen), while in the classrooms, as in the great hall of the ground floor, noisy and confused meetings were held constantly. The revolution was beginning – it was in November 1917 – and in the corridors of the Smolny Institute everything could be found, except noble girls: mud on the floors; a bad smell of sweaty winter clothes; people sleeping in corners and especially screams, contradictory proclamations, tick-tacking of typewriters, runners who ran out of breath with their bags of telegrams and finally smoke, smoke and then still acrid and pungent smoke of Russian tobacco. That was, until the elections for the Constituent Assembly, the chaotic atmosphere of the revolution.

But the elections went badly for the Bolsheviks, who did not hesitate to dissolve the Constituent Assembly. Then began the long authoritarian season of Russian history. Civil war,bureaucracy and the end of freedom. The transfer of the headquarters of the revolution of the Smolny Institute in St. Petersburg to the Kremlin in Moscow at the end of 1917 accompanied – in the words of a historian – Russia towards the abyss.